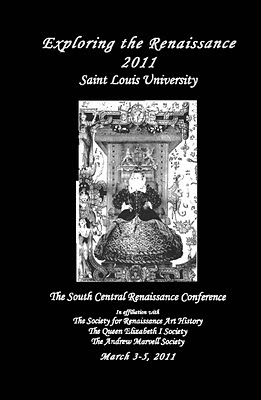 My wife and I recently attended the annual meeting of the Society for Renaissance Art History. The Society meets every year in conjunction with the meeting of the South Central Renaissance Conference. This year this relatively small conference was held at the University of St. Louis. Here is a report of one day, Friday, March 4.

The conference featured two panels in the morning and two in the afternoon following a break for lunch. Each panel featured three or four papers usually accompanied by illustrative slides. At the end of the day there was a plenary session with a featured speaker.

I presented my paper on Giorgione’s Tempest at the 10:00 session. The panel was simply titled, “ Reconsiderations” and featured four papers. Even if I had not been presenting my paper, I would have attended since the titles of the papers sounded very interesting.

William Levin, a recently retired professor from Centre College, was to discuss Ghiberti’s famous Gates of Paradise. Brian Steele, a professor from Texas Tech and current President of the Society, was going to discuss Giovanni Bellini’s famous Frari Triptych. My paper on the Tempest was about one of the most famous and enigmatic paintings of all time. Ryan Gregg of Webster University would end the session with a paper on Sangallo’s Reclining Pan, now in the St. Louis Museum of Art. 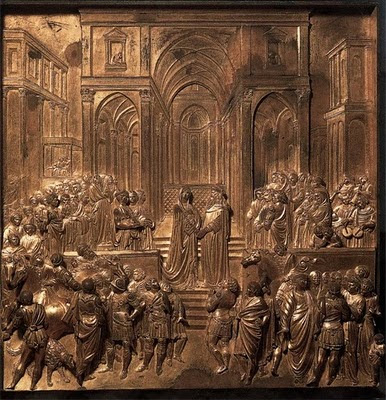 Levin’s paper, entitled “Towards a Fuller Understanding of Ghiberti’s Gates of Paradise,” was a real eye opener. Ghiberti could have chosen any number of scenes from the Old Testament but what was the reason for the ten he finally chose? Levin argued that the theme in each scene represented reconciliation, whether it be the obvious meeting of Solomon and Sheba, or the not so obvious scene of Abraham’s attempted sacrifice of his son, Isaac. The doors then were an attempt to aid in the process of reconciliation between Eastern and Western Christians as they faced a growing threat from Islam. It was very persuasive although I did wonder if the doors might also be an attempt to reconcile the contending factions in Florence itself. 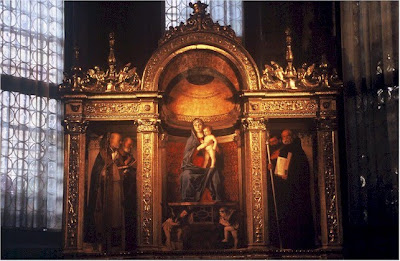 Brian Steele’s, “Reframing the Context: Giovanni Bellini’s Frari Triptych as Salvific Wisdom,“ was equally well argued. Steele looked at not only the painting itself but also at the surrounding framework to show how every element related to the central theme. The central theme he found in a close examination of the page in the book held open by St. Benedict. In addition, Steele showed how the actual dimensions of parts of the Triptych fit into a unified whole. Marvelous!

In my paper I discussed the Tempest as the “Rest on the Flight into Egypt.” It was basically the same paper that I gave at the RSA conference in Venice last year but with the addition of some new material on the “solitary bird on the rooftop.” I have placed the paper with the PowerPoint slides on my website. 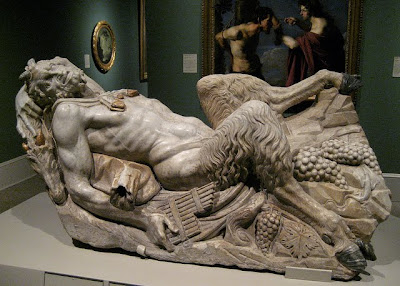 Frankly, I wasn’t expecting much from Ryan Gregg’s, “The St. Louis Art Museum’s Reclining Pan as Eclogue,” but was pleasantly surprised. Gregg argued that the sculpture was Sangallo’s homage to the recently deceased Michelangelo, and that every element in the sculpture brought Michelangelo to mind. I have to be continually reminded that every element in a Renaissance work of art is there for a reason. Very little was done by caprice or fancy.

Earlier in the day we attended a panel entitled, "Nuns as Patrons of Art and Theatre in Renaissance Italy." I was particularly interested in hearing a paper by Cynthia Stollhans on a 13th century fresco cycle about the legendary life of St. Catherine of Alexandria. Stollhans, a professor from the host university, is probably the world’s greatest authority on Catherine, the most popular female saint of the Middle Ages after Mary Magdalen.

Stollhans argued that cloistered nuns like those attached to the Church of St. Agnese in Rome could express and identify themselves through their patronage of the interior decoration of the church. Marilyn Dunn of Loyola University made much the same point about the nuns responsible for the decoration of the Church of S. Silvestro in Capite in Rome in the 17th century. In a paper entitled, “Theater and Music in the Florentine convent of San Girolamo,” Elissa Weaver of the University of Chicago argued that nuns were not only patrons of art but also creators and performers. She described the remarkable career of Maria Clemente Ruoti who in the early part of the 17th century entered the convent at the age of 9 but went on to write, produce, and perform two major plays before the Medici court.

It is an interesting sociological fact that the great majority of art history teachers and students today are women. Among them there would appear to be a great interest in exploring the role of religious orders of nuns during the Renaissance. Maybe it is even an identification with these extremely creative women who for various reasons spent their whole lives toiling in obscurity.
After hearing these three fine papers, it occurred to me that maybe women during the Renaissance were better able to explore their creativity inside the convent than outside its walls.

After an afternoon siesta, I went back for the plenary session held in the University’s beautiful art gallery. Diane Cole Ahl of Lafayette College presented the annual Louis L. Martz lecture, “This Splendid, Noble Art,” : Re-viewing Fifteenth-Century Painting in Italy.”

In effect her talk was a preview of her forthcoming book on 15th Century Art. Taking her cue from Giovanni Santi’s encomium on 15th century art, she described the great achievements of the Quattrocento throughout Italy, from Venice and Milan to Sicily. She demonstrated that the three themes, Classical Antiquity, Sacred Art, and depictions of love and pleasure, were certainly well established in the 15th.

She blamed Vasari for the undue emphasis placed upon Florence, Rome, and Venice in the 16th century. Vasari was motivated, she said, not just by personal conviction but also by his position as court artist to the Medici. Still, I cannot help but feel that Vasari had a point. He wasn’t the only one to discern a remarkable advance in art during the “High Renaissance.” I’m sure that Raphael, for example, felt that his work far surpassed anything that his father or even his master, Perugino, had ever done. Moreover, when opportunity beckoned, Raphael did not hesitate to leave Umbria for Florence and Rome.

Nevertheless, Diane Cole Ahl is certainly right to draw attention to artists living outside the big three major cities. Not only are they significant in their own right, but also they can throw considerable light on what was going on in Florence, Venice and Rome.

The day ended with a dinner at a local restaurant attended by most of the presenters. It was great to sit and talk on an informal basis. Sadly many of these art historians and educators are feeling the pain of the economic downturn that is forcing many schools to close down Art history programs. I heard of a major university in the South that is dropping its whole graduate program.

One final note about Dr. Jill Carrington of Stephen F. Austin University in Texas. She organized and hosted the dinner as well as chaired the Reconsiderations panel. From our first meeting she made this “independent” and “unaffiliated” scholar feel right at home.
Posted by Dr. F at 3:13 PM