There is no mystery about the subject of Titian's famous version of "The Presentation of the Virgin". It is a depiction of the legendary account of Mary's dedication to the temple by her parents, Joachim and Anne. According to the legend the prayers of the barren couple were finally answered, and in thankfulness they offered the child to the Temple where she would be raised in service to the Lord. The presentation was supposed to have occurred when Mary was weaned at about the age of three, but painters usually depicted her as somewhat older.

Here is Anna Jameson's description of Titian's version from her "Legends of the Madonna."

In the general arrangement, Titian seems to have been indebted to Carpaccio; but all that is simple and poetical in the latter becomes in Titian’s version sumptuous and dramatic. Here Mary does not kneel, but holding up her light-blue drapery, ascends the steps with childish grace and alacrity. The number of portrait heads adds to the value and interest of the picture. Titian himself is looking up, and near him stands his friend, Andrea de’ Franceschi, grand-chancellor of Venice, robed as a Caveliero di San Marco. In the fine bearded head of the priest, who stands behind the high-priest, we may recognize, I think, the likeness of Cardinal Bembo. In the foreground, instead of the poetical symbol of the unicorn, we have an old woman selling eggs and fowls, as in Albert Durer’s print, which must have been well known to Titian. Albert Durer published his life of the Virgin in 1520, and Titian painted his picture about 1550.*

Scholars now date the painting to about a decade earlier but have had difficulty in identifying the old woman with the eggs so prominently figured in the foreground.  To my knowledge no one has so far been able to come up with a good explanation of this woman who does not even look at the young Virgin ascending the steps. In his Titian catalog Filoppo Pedrocco saw the woman as a symbol of Judaism or the Old Law.** But I have suggested in an earlier post that the answer can be found not in an apocryphal legend but in Scripture itself. In his gospel Luke, always a stickler for historical accuracy and detail, noted the presence of an elderly woman who practically lived in the Temple. It was Anna the prophetess. In Luke's account of the Presentation of the Infant Jesus in the Temple, itself probably the basis for the legend of the Presentation of his Mother, we meet two strange figures: the famous Simeon, and the not so famous Anna. Here is Luke's description. (2:36-38)

There was a prophetess also, Anna the daughter of Phanuel, of the tribe of Asher, she was well on in years. Her days of girlhood over, she had been married for seven years before becoming a widow. She was now eighty-four years old and never left the Temple, serving God night and day with fasting and prayer. she came by just at that moment and began to praise God; and she spoke of the child to all who looked forward to the deliverance of Jerusalem. 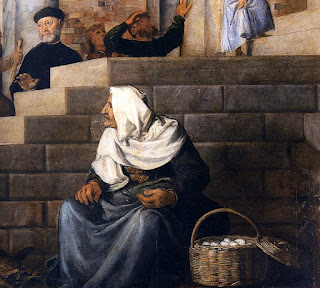 Do the eggs represent a problem for this identification? There might be a reference in the legends, or they might be symbolic, but I suspect that they refer to the sacrifice mentioned by Luke at the Presentation of Jesus: "a pair of turtledoves or two young pigeons." Perhaps Anna was thought to support herself by supplying these birds.

I think it would have been perfectly natural for the legends to place a Temple denizen who had been present at the Presentation of Jesus at the scene of the Presentation of his Mother only a few years before. In another legend popular at the time the two thieves who were crucified alongside of Christ were believed to have been the same two who had waylaid the Holy Family on the flight into Egypt 30 years before. See my discussion of "Discovery of Paris" or the Encounter with the Robbers at MyGiorgione.

My original post was to draw attention to David Orme's  wonderful discussion at art-threads.co.uk of the artistic renderings in Renaissance Italy of the apocryphal legend of the Presentation of the Virgin. Titian's version above is perhaps the most famous but David reproduces some equally marvelous versions especially one by Tintoretto. He includes an explanation of the 15 steps so commonly used. Although Titian's version only seems to contain 13 steps, there are two more behind the priest at the top. David's discussion of the Presentation is included in his section on the Life of the Virgin and Childhood of Jesus.

Email ThisBlogThis!Share to TwitterShare to FacebookShare to Pinterest
Labels: Presentation of the Virgin, Titian

Although most of my work has centered around Giorgione, Titian and the Venetian Renaissance, my acquaintance with Hasan Niyazi and his popular Art history blog, Three Pipe Problem, led me to consider and re-interpret a painting usually attributed to  Raphael. Hasan, who died tragically and unexpectedly last week at the age of 37, was a great fan of Raphael. Actually, he was much more than a fan. Besides his work at 3PP, he was in the process of creating a complete Raphael database. 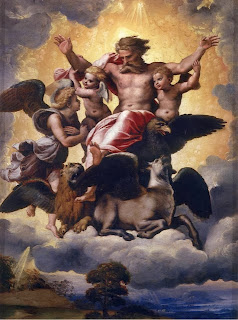 On June 6, 2011 Hasan posted an account, "Raphael's Vision and an Italian Storm," of a controversy in Italian art history circles concerning "The Vision of Exekiel," a painting usually attributed to Raphael or to one of his circle. On reading his account I was surprised to see that despite the controversy, no one questioned the subject or title of the painting. It seemed to me that rather than the vision of Ezekiel, the subject of the painting was a vision of John from the Book of Revelation.

I prepared a little essay and sent it off to Hasan and he agreed to post it as a follow up on his site. It appeared on June 10, 2011 as "Re-examining the Vision of Ezekiel." Understanding the real subject of the painting also shed light on its connection with a Madonna and Child with John the Baptist and Saint Elizabeth attributed to Giulio Romano. Although separated today, the paintings seem to have been originally conceived as a pair. The meeting of the infant Jesus with John the Baptist in the desert marks the beginning of the public life of Jesus. The vision of John on the isle of Paphos marks the climax of the life of Christ. 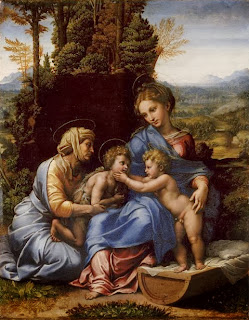 To me this fruitful interaction is one of the great advantages to online discussion of art history. Use the links above to read the two posts and decide if the painting should now be called "The Vision of St. John on the Isle of Patmos."