One of my favorite art venues in New York City is the Morgan Library, the former home of famed financier and collector J.P. Morgan. My wife and I and a friend visited the Morgan early this summer to see two exhibitions. The first, “Henry James and American Painting,” examined the novelist’s interest in art as well as his friendship with a number of painters of the time. The second, “Poussin, Claude, and French Drawings in the Classical Age,” was drawn largely from the Museum’s huge collection. Despite the title, the drawings exhibited a continued interest in religious or sacred subjects in the classical era.

The exhibitions were excellent but for me the highlight of any visit to the Morgan is the West Room, J.P. Morgan’s own personal study. It is an extremely spacious room whose walls are covered with opulent red wallpaper or fabric. His magnificent wooden desk is at one end and when he sat behind it, he would have faced a large fireplace above which was his own large portrait. To me the most striking thing about the room is that the great financier chose to surround himself with at least five paintings featuring the Madonna and Child.

As you enter the room and look at his desk you immediately notice on the wall behind what certainly looks like a Madonna done by the great early Venetian Renaissance master, Giovanni Bellini. In the painting the Madonna sits off to the right with her nude infant Son on her lap. The Child raises his hand to bless a kneeling donor. Four saints stand as witnesses. The Museum labels the saints as Paul, George, and two unidentified female martyrs with the one facing the viewer perhaps being St. Cecilia holding a martyr’s palm.

The Museum’s website indicates that while the painting bears the appearance of a Bellini, it was done by Marco Bello, a member of Bellini’s workshop, who obviously followed the master’s guidelines. The Bellini workshop was in the business of providing high quality devotional objects for its Venetian clientele. The painting was done in tempera on panel but later changed to canvas. It measures 29 ½ by 43 inches. 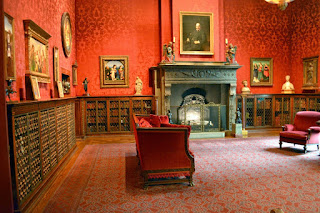 Across the way, two similar paintings flank the fireplace on the wall facing Morgan’s desk. On the right we see a Perugino of a kneeling Madonna with two saints adoring the Christ child who lies on bare ground. The Morgan’s website identifies the saints as St. John the Evangelist and “an unidentified female saint, perhaps Mary Magdalene.” I can accept Mary Magdalene, but I find it hard to see John the Evangelist in this painting. I know that Renaissance artists often portrayed the youngest Apostle as beardless and with long hair, but the saint on the left certainly looks like a woman to me. I believe that the part in the middle of her hair is a tipoff.


The website also notes that the inscription on the frame is from Psalm 45 and refers to the Christ child. “Fairer in beauty are you than the sons of men; grace is poured out upon thy lips; thus God has blessed you forever.” It’s too bad that Perugino’s clumsy bambino does not bring out the beauty of the child in the way that his pupil Raphael might have done.


On the other side of the fireplace is a painting of the Madonna and child by Francesco Francia, who, like Perugino, was one of the artists in great demand by patrons at the end of the fifteenth century. Francia was a goldsmith by trade who worked mainly in his home town of Bologna. The Museum’s website notes that depictions of “the Virgin and Child with saints are predominant among his major surviving works.”


The Madonna stands behind a parapet supporting her child who stands on the parapet. The child is nude but old enough to stand. In respect to the child Francia did a much better job than Perugino. Madonna and Child are flanked by St. Dominic holding a lily, and St. Barbara holding a martyr’s palm as well as a replica of the tower in which she was imprisoned by her pagan father.

The painting is oil on panel and measures 32 and a half by 26 and five eighths inches.


Near the Francia, on the adjacent wall, are two other Madonnas. Morgan could have looked up from his desk and seen all three together. The first is a tondo labelled the Madonna of the Magnificat. It looks like a Botticelli but the Museum notes that it is only from the master’s workshop.

The Museum indicates that "the title derives from the opening words of the Virgin's song of exaltation, Magnificat anima mea dominus (My soul doth glorify the Lord)." It is in oil on panel and measures 37 3/8 inches in diameter. The Museum dates it c. 1490.


The second is by Cima da Conegliano and is labelled, “Virgin and Child with SS. Catherine and John the Baptist. The Museum trivializes the painting somewhat by claiming that “the Christ child leans back to play with John the Baptist’s cross,” but the many depictions of this incident make it clear that Jesus is in the act of taking up his own cross or mission. This action is then tied in with the acceptance of the ring which the Madonna offers to S. Catherine who in her mystic marriage will join herself with Christ and take up her own cross. In her hand she holds the martyr’s palm.

The Museum notes that “Cima asserted his authorship of the painting on the small piece of paper (cartellino) affixed to the parapet in the foreground, an element considered a signature of his work.” The painting is in oil on panel and measures 25 3/8 by 38 5/8 inches.

The Francia was acquired by Morgan in 1907,  and the other four in 1910/11. Morgan lived during the Pre-Raphaelite movement and that might explain his interest in these paintings, even the copies. I suspect, however, that he had his own personal reason for lining his study with images of the Madonna.