Valentin de Boulogne at the Met

Last week my wife and I finally got to see the Metropolitan Museum’s exhibition, Valentin de Boulogne, Beyond Caravaggio, that closes today after a run of three months.  The Met did a remarkable job of assembling 45 of the 60 extant paintings of this early seventeenth century artist who, like Caravaggio, died at a relatively young age. 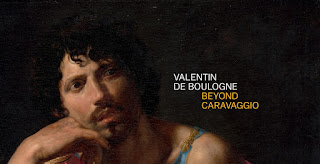 On its website the Met provided this introduction to Valentin:

Although he is not well known to the general public, Valentin has long been admired by those with a passion for Caravaggesque painting. His work was a reference point for the great realists of the 19th century, from Courbet to Manet, and his startlingly vibrant staging of dramatic events and the deep humanity of his figures, who seem touched by a pervasive melancholy, make his work unforgettable.

After viewing the paintings which were beautifully hung in a number of rooms, it would be hard to dispute the Met’s description.  Valentin came on the scene right around the time of Caravaggio’s death and obviously learned from the master.  His paintings, many of a very large size, are startlingly vibrant and dramatic, and full of the humanity of his figures both secular and sacred. 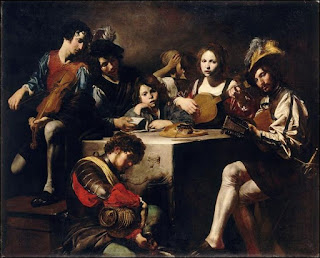 Like Caravaggio he depicted musicians, tavern goers, gamblers, pick-pockets, and card sharps in action. Nevertheless, most of the paintings in the exhibition showed that Valentin’s patrons still desired sacred subjects, and that some subjects still retained their popularity despite the iconoclasm of the Protestant Reformation, or the reforms of the Council of Trent.

For example, the exhibition contained more than one painting of the denial of Peter. The Met’s permanent collection features a Titian version of the denial that illustrates continuity as well as development. Titian used the contrast of light and dark long before Caravaggio and Valentin, but did not place the scene among a crowd of disinterested bystanders for dramatic effect.


In the same way, I found it interesting to compare Valentin’s two versions of Judith, the Jewish heroine, with Giorgione’s version completed a century before. In one version Valentin followed Caravaggio and Artemisia Gentileschi in depicting Judith in the act of beheading Holofernes. However, in another version we see a much less bloody scene with a stately composed Judith calmly standing with the severed head at her side in much the manner of Giorgione.

Protestant reformers rejected the Book of Judith as apocryphal but the story obviously remained popular in Catholic Rome.  I suspect that Judith’s enduring popularity was not just because she was viewed as a savior of her people from an oppressive tyrant. Looking at these paintings I saw a woman defending her own virtue and chastity. Shakespeare’s Rape of Lucrece was one of the most popular poems of this era for much the same reason.

Here is a link to an excellent brief video introduction of Valentin and the Met exhibition by Met curator Keith Christiansen. Alternatively, the video can be viewed below.