May 2, 2019 marked the 500th anniversary of the death of Leonardo da Vinci.  I thought it might be appropriate to reprise a review article on Leo Steinberg's interpretation of the Last Supper that originally appeared on this site on 9/18/2014. 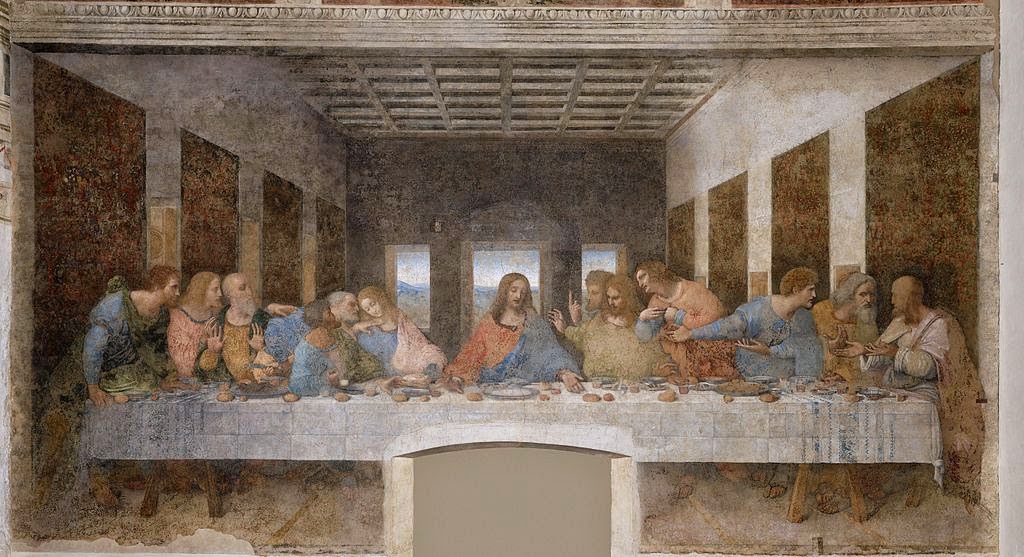 The damage to Leonardo da Vinci’s famous Last Supper is well known. Even after the most recent restoration the huge fresco that measures over 29 by 15 feet is in such perilous condition that viewing access is strictly controlled and limited.

We know from early copies that much of Leonardo’s work has been irretrievably lost or covered. Early on, the feet of Christ and the Apostles had so disappeared that the monks had no reluctance to put a door in the wall under the figure of Christ. We know of this from copies but even the earliest copies are often unreliable.  They either omit or alter certain important details. Finally, although the painting is still in its original venue, it is impossible to replicate the monk’s dining room or cenacolo and see the painting as its original viewers would have seen it.

Compared to the physical damage that Leonardo’s work has suffered, the interpretive damage has been even greater. It was this damage that Leo Steinberg set out to repair in an extended essay, “Leonardo’s Last Supper,” that appeared in the Art Quarterly in 1973. Almost thirty years later in 2001 he published his definitive revised update, Leonardo’s Incessant Last Supper.

I am not familiar with the critical reaction to either study except to the extent that Steinberg referred to it in the 2001 book. Nevertheless, anyone reading Steinberg's book today would have to acknowledge that it a revolutionary masterpiece by one of the greatest art historians of the twentieth century.

Of course his answer was positive.

What remains to be told about Leonardo’s Last Supper is not some residual matter previously overlooked; the novelty of the subject is the whole of the work responding to different questions. In the present study, the picture emerges as both less secular and less simple; contrary to inherited notions, it is nowhere “unambiguous and clear,” but consistently layered, double functioning, polysemantic.[i]

Steinberg took on an academic tradition that had been entrenched ever since the time of the Enlightenment, especially after Goethe’s famous essay claimed that Leonardo had depicted the psychological shock on the faces of the Apostles at the moment immediately following the announcement of the betrayal. Goethe’s interpretation had seemingly settled the matter for all future observers. Steinberg, however, blamed nineteenth secularism for a profound mis-reading.

In the art of the Renaissance, the obscurantism imputed to religious preoccupations seemed happily superseded. Ideal art was believed to reveal humane truths which the service of religion could only divert and distort. And it was again in Leonardo in whom these highest artistic goals, originally embodied in ancient Greece, seemed reaffirmed. In this projection of nineteenth-century values upon Renaissance art, the masterworks of the Renaissance were reduced to intelligible simplicity, and Leonardo’s Last Supper became (nothing but) a behavioral study of twelve individuals responding to psychic shock. [ii]

By 2001, almost 30 years after his original study had been published, he could remark that his interpretation was “no longer news,” and that the “common view” was “no longer pandemic.” But I wonder if he was too sanguine. A quick web search found that the lead Wikipedia article began with the following pronouncement.

The Last Supper specifically portrays the reaction given by each apostle when Jesus said one of them would betray him.

I suspect that his thesis is still only known by a small coterie of Art historians. I even think that most Art history graduate students are not required to read it.

Reading Steinberg’s Leonardo's Incessant Last Supper not only brings one deeper and deeper into a great masterpiece, but also deeper and deeper into the mind and culture of the genius who was Leonardo. However, since the common view holds that the painting depicts the psychological reaction to the announcement of the betrayal, I would like to concentrate on Steinberg’s analysis of Leonardo’s portrayal of the Apostles.

Beginning with the general principle “that nothing in Leonardo’s Last Supper is trivial,” Steinberg asserted that the subject of the picture was not merely the betrayal announcement but the whole story of the Last Supper; the Institution of the Eucharist, the Passion, and the significance of it all to the viewer.

never before attempted, was to collect in “conjoint presence” a super dozen male sitters strung across nearly 29 feet of wall, to convert the drag of enumeration into what he called a “harmonic total effect.”[iii]

Leonardo’s solution of the problem is “an untiring marvel” but first we must identify the Apostles. In their places from left to right there are Bartholomew, James (the eventual head of the Church in Jerusalem), Andrew, Peter, Judas, and John. On the other side there are James (the son of Zebedee), Thomas (who has thrust himself ahead of James), Philip, Matthew, Thaddeus (sometimes called Jude), and Simon.


Much of the detail of the original has been lost but an anonymous copy c. 1550, gives a very good look at the hands and feet of the 13 men in the picture. Steinberg stressed the significance not only of the feet of Christ but of the Apostles. Christ’s feet are central and larger and they announce his impending crucifixion. The feet of the Apostles are there to be washed but also represent their role and future destiny.

this very night, each of these feet is washed and wiped dry by the Master. In view of the gospel…how negligible can these feet be; surely, this is their hour! [iv]

While he stressed the importance of viewing Christ and the Apostles as a whole, Steinberg also broke them down into groups of six, three and two, and discussed the various relationships in these groups. Here are some examples. 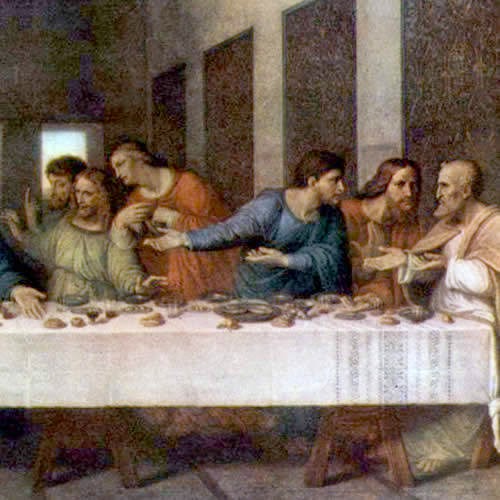 Let’s start with the triad of Simon, Thaddeus, and Matthew on our right at the end of the table.

A flotilla of six open hands in formation strains toward Christ, as if in immediate response to the word “take!” ….the Communion of the Apostles is imminent.[v]

Thaddeus’ hand toward Christ; Christ’s toward us. It is missing a lot to dismiss the correspondence as accidental.

Feet, hands, even fingers are important. In the triad at Christ’s left hand (Philip, Thomas, James) the finger of Thomas, who has thrust himself forward toward Jesus, is a veritable sign marker, “the finger destined to verify the Resurrection, the Christian hope…" 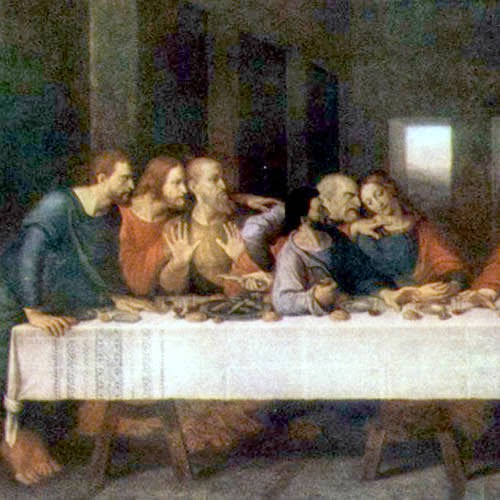 The triad closest to Christ’s right hand includes Peter who denies, Judas who betrays, and John who remains to the end at the foot of the Cross.

The inner triad refers to imminent Crucifixion. It contains the dark force that sets the Passion in motion, then, behind Judas, St. Peter. Peter’s right hand points the knife he will ply a few hours hence at the arrest. And the interlocking hands of the beloved disciple are pre-positioned for their grieving on Calvary.

The figure of Judas who recoils from the plate is given special attention. Steinberg’s interpretation is buttressed by an analysis of a Leonardo drawing that depicts “the wretchedness of a man who had once been chosen by Jesus.”

Leonardo brought a tragic vision far in advance of what his contemporaries could fathom. The subjective experience of abjection never received more humane understanding.

The triad on the left furthest from Jesus includes Andrew, the brother of Peter, James, the first Bishop of Jerusalem, and Bartholomew. They are all interconnected. Andrew sits next to his brother and James places the hand of ordination on each of them. Peter’s knife points to Bartholomew and prefigures the form of his martyrdom. The pose of Andrew is particularly interesting.

For those who have seen a priest at the altar, who recall the corresponding pose of St. Francis stigmatized and, finally, Andrew’s own story, he is the Apostle whose lodestar is crucifixion….

At the end of the table Bartholomew has risen with his feet awkwardly crossed, an inexplicable oddity that has even led some copiers to correct Leonardo’s “mistake.” However, Steinberg noted one tradition that had Bartholomew crucified, a martyrdom he yearned for in order to emulate the Master.
Speaking of Jesus, no review can do justice to Steinberg’s discussion of the figure of Christ, no longer seen as a passive figure sitting back while the Apostles react to the betrayal announcement.

as the person of Christ unites man and God, so his right hand summons the agent of his human death even as it offers the means of salvation….the Christ figure as agent—both hands actively molding his speech, and both directed at bread and wine…[vii]

Christ becomes the capstone of a great central pyramid…And midway between the…slopes of Christ arms and the floor lines that transmit their momentum, exactly halfway, there lies the bread, and there lies the wine.[viii] 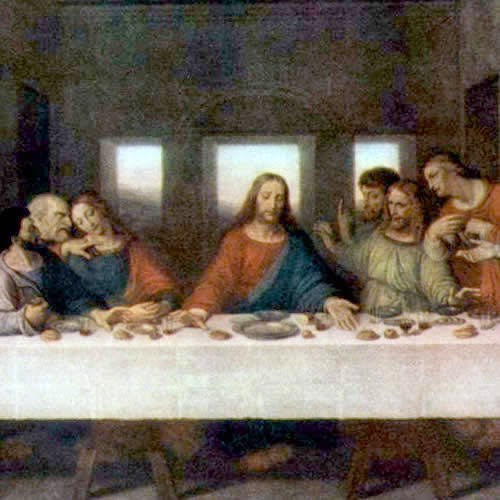 Within the geometry of the picture, the elements of the eucharist, placed in extension of Christ’s earthly presence, serve as conveyors: from the centrality of the Incarnate toward the faithful this side of the picture.

Steinberg backed up his interpretation with a virtuoso display of all the tools available to a modern art historian. He displayed a magisterial familiarity with the interpretive history; the texts; the traditional legends; the related paintings; and with the whole oeuvre of Leonardo. More than anything else, however, was his ability to immerse himself in the whole culture and devotion of Medieval and Renaissance Christianity.  He was born a Russian Jew and emigrated to America right after World War II. He somehow managed to graduate from Harvard and land a position at New York University where his original field was “Modern Art.” But he eventually gravitated to the Renaissance, and his integrity and great learning allowed him to see the “Last Supper” through the believing eyes of Leonardo’s contemporaries.