Royal Academy Exhibition: In the Age of Giorgione

The Royal Academy of Arts exhibition, "In the Age of Giorgione" opened on March 12 to mixed reviews. Searching on line I found one reviewer who claimed that rather than restoring Giorgione's reputation, the exhibition showed his inferiority to the more famous Titian. It's hard to understand how such a judgment could be made given the fact that masterpieces like the Accademia's Tempest, the Kunsthistorisches Museum's Three Philosophers, and the Dresden Sleeping Venus are not included in the exhibition.

However, a reviewer at The Guardian praised Giorgione and the exhibition but regarded the painter as a sex-addict whose work is riddled with eroticism.

Nothing pleased this artist like escaping the noisy city and wandering the countryside, lute in hand, a woman on his arm. And what he really loved was to get the woman to strip off in some tranquil glade. Giorgione revolutionized the female nude. Before him, Renaissance artists were quite decorous in approaching the goddess Venus. Giorgione made nudity carnal, hedonist. He was quickly imitated by other Venetian artists, including his younger friend Titian, who followed him out into the meadows with wine, music, and courtesans.

I am not alone in this opinion. Famed art historian Kenneth Clark claimed that Giorgione invented "the classic Venetian nude," but he did not see eroticism in Giorgione's work. Instead he found in the Sleeping Venus,  “an appetite for physical beauty more eager and more delicate than had been bestowed on any artist since fourth-century Greece.” 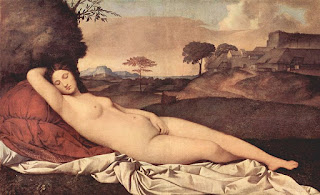 Here is a link to one of the earliest and most popular posts on Giorgione et al... that discusses the Sleeping Venus and Clarks opinion more fully.

This year London's Royal Academy of Arts is hosting an exhibition entitled, “In the Age of Giorgione,” from March 12 to June 6. The exhibition will bring together a number of paintings attributed to Giorgione and some of his contemporaries. The expressed goal of the exhibition is to raise awareness of Giorgione and his great contribution to the Venetian Renaissance.

Although held in the highest regard by professional art historians, Giorgione has not attained the public iconic status of Titian, Raphael, or Michelangelo. Giorgione died tragically of the plague in 1510 at about the age of 33. Although acknowledged as a master by his contemporaries, little is known about the young master from Castelfranco in the Veneto. He did not sign his works and left no letters or documents behind.

For centuries his major works have mystified scholars and led to countless and contradictory interpretations. Moreover, given the paucity of evidence questions of attribution have persisted from his death to the present. The Royal Academy website has a very good discussion of the attribution history.

Indeed, the Royal Academy has brought together two world class Venetian Renaissance scholars, Peter Humfrey and Paul Joannides, to debate online the attribution of a portrait of a young man variously given to Giorgione or the young Titian. The RA is even asking the public to participate by indicating its preference on social media. The portrait is often called the Giustiniani portrait from the Venetian family of that name.

Below are excerpts from the assessments of the two scholars that not only give the gist of their position, but also demonstrate the methods used in scholarly analysis. First, here is Peter Humfrey arguing for Giorgione.
The Giustiniani Portrait is one of the very few paintings that continue to be widely accepted as by Giorgione – to my mind correctly – despite its lack of any early history. Significantly, it is always seen as an early work, close in style to the Castelfranco Altarpiece which is now usually dated to the very beginning of the 16th century, c. 1500. Indeed, despite their completely different subjects, the two works take as their starting point compositional models by Giovanni Bellini, while also revolutionising them. In both works the figures are dreamily introspective, absorbed in thought. Their poses are also passive, with only the slightest indication of movement, and their physiognomies remain slender. Very similar is the way that the left hand of the Virgin and the right hand of the young man are represented in somewhat delicate and tentative foreshortening on top of an almost abstract ledge.

On the other hand, Paul Joannides makes a strong case for Titian.

But the essential quality that reveals Titian’s authorship is the symphonic interaction of flesh, hair, fingernails, chemise and the astonishing quilted jacket, which itself takes on the palpability of flesh. This interplay of forms and textures and the manner in which those textures – which vary internally as well as between one another – are constructed is characteristic of the young Titian’s pictorial tactility, which surpasses anything seen in Giorgione. Thus the gullies in the jacket and the complex forms of the ties are created not by continuous modelling, but by juxtaposed components of purple, applied in streaks and touches of the brush.

It should be noted that Joannides’ attribution would require a later date for the painting than Humfrey’s date of circa 1500. Indeed in his study of the early Titian, Joannides had argued that Titian only taught himself to draw after the death of Giorgione in 1510.

The Royal Academy website gave the public three voting options, Giorgione, Titian, or Neither. I would like to suggest that there should be another option. It is not unimaginable to think that both Giorgione and Titian worked on this portrait. It is possible that both Humfrey and Joannides are correct and that there are elements of both Giorgione and Titian in this painting. It is well known that some of Giorgione’s unfinished works were completed by Titian and Sebastiano Veneziano, later called Sebastiano del Piombo.

In 1510 Giorgione was at the height of his craft. Titian was just coming into his own and had just recently worked for Giorgione on the exterior frescoes of the Fondaco dei Tedeschi. I have come to believe that both Titian and Sebastiano worked for Giorgione as colorists. It would not have been unusual for a Renaissance master to leave mundane details like clothing to a member of his shop.

Humfrey sees Giorgione details in the Portrait of a Young Man, and Joannides sees Titian details. Maybe they both see correctly. I would like to respond to the Royal Academy survey by answering, "Both".