The meaning of the figures on the antique relief in the center of Titian’s Sacred and Profane Love has eluded scholars for centuries. In this post I would like to discuss the horse so prominently depicted on the left side of the relief.

In my paper on the Sacred and Profane Love I argued that the subject of the mysterious painting is the “Conversion of Mary Magdalen,” and that the figures on the antique relief must not only refer to the subject of the painting, but also, must be depictions of great sinners.

In my previous two posts I elaborated on my discussion in the paper and looked at the right side of the relief where we can now identify Adam and Eve as well as Cain and Abel. On the left side of the relief we can see a horse whose rider appears to be falling off. We can also make out two other men in front of and in back of the horse. *

Why has no one ever seen the conversion of St. Paul in this scene? Anytime, we see a riderless horse in a painting from the Renaissance we should suspect that the artist has attempted to depict the famous conversion on the road to Damascus. Here is the account of Paul’s conversion from chapter 9 of the Acts of the Apostles:

And as he went on his journey, it came to pass that he drew near to Damascus, when suddenly a light from heaven shone round about him; and falling to the ground, he heard a voice saying to him, “Saul, Saul, why dost thou persecute me?” And he said, “Who art thou, Lord?” And he said, “I am Jesus, whom thou art persecuting. It is hard for you to kick against the goad.” And he, trembling and amazed, said, “Lord, what wilt thou have me do?” And the Lord said to him, “Arise and go into the city, and it will be told thee what thou must do.” Now the men who journeyed with him stood speechless, hearing indeed the voice, but seeing no one. And Saul arose from the ground, but when his eyes were opened, he could see nothing. And leading him by the hand, they brought him into Damascus.

Although there is no mention of a horse in the scriptural account, it had become part and parcel of the story as early as the fourth century despite the objection of St. Augustine who argued that a Pharisee would never ride a horse. By the Renaissance the horse had become part of the common Catholic imagination and was usually included in artistic representations.

For our purposes other important parts of the account would be the light from heaven that shone round Paul and forced him to fall to the ground. The voice of Jesus is heard but he does not appear. Also, Paul is accompanied by other men who hear the voice but stand by as speechless spectators.

In Titian's relief Paul is actually falling off the horse's hind quarters. One attendant can be seen in front of the horse, and another tries to prevent Paul's fall at the rear.

Everyone is familiar with Caravaggio’s famous depiction of the event that still remains in its original location in the Cerasi chapel of S. Maria del Popolo in Rome. Paul lies on the ground, arms upraised toward the light and the horse towers over him.

Other depictions of the event often present a more tumultuous scene but still include the light, the other men, and the horse. These elements must have been commonplace even before the sixteenth century. Here is a famous tapestry made from a Raphael cartoon.

Early in his career Giovanni Bellini also depicted the conversion of Paul.

I know that Renaissance artists loved to depict horses but when we see a riderless horse in a seemingly inexplicable scene, we should at least consider the possibility of the conversion of Paul.

There is more than one reason why Titian or his patron might have wanted to include St. Paul in a painting representing the conversion of Mary Magdalen. The conversion stories of both saints were equally famous. At the same time, they were both symbols of sinners converted by divine love.

In researching this piece I turned to the always reliable Emile Male. In his magisterial study of later Medieval art Male re-discovered two extremely popular books of the fifteenth century that have subsequently slipped back into oblivion. The first was the Ars moriendi (the Art of dying):**

The text was often striking, but it is the astonishing woodcuts above all that spread its fame throughout Europe….death appears not as a farcical dance, but as a serious drama played around the bed of the dying man; angel and devil stand at his side, contending for the soul that will soon depart...

The success of the Ars moriendi was even more extraordinary than the success of the Danse Macabre. Printed editions began to appear after the woodcut editions. Each country had its own… It appeared in turn in French, German, English, Italian, and Spanish….Even Italy, where Gothic barbarity was so scorned, was influenced by the crude woodcuts of the Ars moriendi, although it is true it robbed them of most of their original character.

The other book was a commentary on the Ars moriendi in an edition published by Verard entitled "L’Art de Bien Vivre et de Bien mourir (The Art of Good Living and Good dying)."  Male noted that a "book that edified all Europe is worth some study."

Verard's commentary includes a number of episodes with corresponding woodcuts where devils and angels compete for the soul of the dying man. In one episode Mary Magdalen and St. Paul appear with St. Peter and the Good Thief to console the dying man.

When the devil cannot shake the dying man’s faith, he changes tactics. He no longer denies God, but represents him as inexorable... Hideous monsters again rove around the sick man’s bed. One presents him with a large parchment document: this is the list “of all the evils that the poor creature has committed during his sojourn on earth.”…
The angel again descends from heaven, accompanied by four saints. They are St. Peter, who thrice denied his Master; Mary Magdalene, the sinner; St. Paul, the persecutor whom God struck down to convert him; and the good thief, who repented on the cross. These are the great witnesses of divine mercy….

The woodcut shows Mary Magdalene with her jar of ointment and St. Paul is shown atop the fallen horse. the woodcut is dated 1492. In the same year (1514) that Titian painted the Sacred and Profane Love Raphael painted his depiction of St. Cecilia surrounded by four saints. In front, flanking St. Cecilia, are St. Paul with his sword of truth, and Mary Magdalen with her jar of ointment.

*This series of posts first appeared on Giorgione et al... in the Spring of 2013.  The original paper was first published in 2011.

Adam and Eve on Titian's Relief

In my interpretation of Titian’s “Sacred and Profane Love” I identified the subject of the mysterious painting as the “Conversion of Mary Magdalen.” Seeing the painting as a “sacred subject” opened the way to an explanation of the figures on the equally mysterious relief, a feature that even the greatest scholars have been unable to interpret. Some have even declined to deal with the figures on the relief.

In my paper I discussed the two figures immediately to the right of center and identified them as Cain and Abel. It was not difficult to show that the image of a man in the act of delivering a blow to another man lying prone on the ground was the common way of depicting Cain’s murder of his brother. Titian himself used the same template years later.

In this post I will turn to the two nude figures to the right of Cain and Abel. How is it possible that scholars and others have never been able to identify the nude man and woman standing around a tree as Adam and Eve? What other woman is ever portrayed in full frontal nudity standing by a tree other than Eve. It is a little more difficult to see Adam but if we look closely we see him there on the other side of the tree. 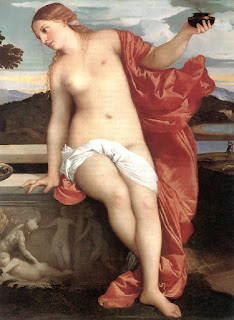 The image of Adam and Eve standing around the tree at the moment of the Fall was probably ubiquitous during the Middle Ages and the Renaissance. It was sculpted on exterior walls and on the interiors of churches and baptistries. Here is an example from the exterior of the Doge’s palace in Venice. 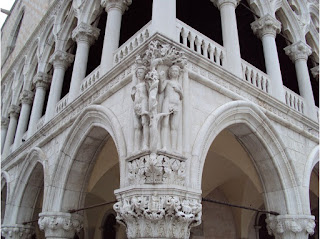 A quick search of the web will also reveal Adam and Eve around the tree on some famous paintings. In the Brancacci chapel Masaccio painted the  expulsion from the garden but Masolino, his associate, portrayed the first couple completely nude by the Tree of the Knowledge of Good and Evil right before the Fall.

Later Raphael used the same motif in the Stanze. 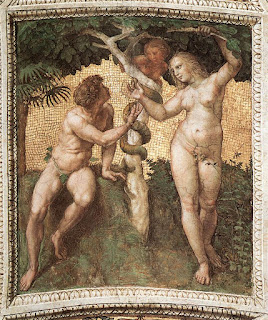 Finally, here is a Titian depiction of Adam and Eve around the tree from around 1550. (Prado) 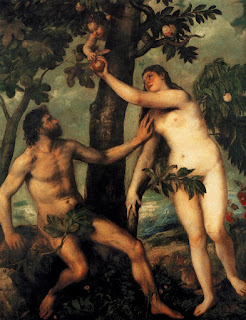 How have scholars not been able to see Adam and Eve on the relief of the “Sacred and Profane Love”?  In his classic study of the art and iconography of the Middle Ages Emile Male noted a similar problem in his own time. He raised the issue in a discussion of carved calendars on famous Medieval cathedrals.

The most beautiful carved calendars are at Chartres, Paris, Amiens, and Reims. They are works of true poetry. In these small scenes, man appears in eternal attitudes. The artist probably intended to represent the peasant of France, but it is also a man of all time, bent toward the earth, the immortal Adam. In their universality, these thirteenth-century reliefs avoid banality. The artists, who themselves did not live far from nature, had experienced this life in all its detail, for just beyond the walls of small medieval towns lay the real country with its tilled fields, its meadows, the beautiful rhythm of its Virgilian labors…when sculptors were imagining scenes of rustic life, they had only to look around them for models….

It is hard to believe that the obvious meaning of these scenes escaped early nineteenth-century archeologists. In 1806, Lenoir interpreted the twelve scenes illustrating the calendar of the cathedral of Cambrai as the twelve labors of Hercules. Dupuis, author of L’Origine de tous les cultes, did identify the signs of the zodiac on the façade of Notre-Dame of Paris, but from this he concluded that the cult of the sun or of Mithra had survived into the thirteenth century. *

Even today scholars and students expend enormous amounts of time and energy trying to find the equivalents of Hercules and Mithra in some of the most beautiful paintings of the High Renaissance. I believe that they are often looking in the wrong place, and often fail to see what would have been obvious to any Venetian artist, patron and even man in the street.

* Emile Male: Religious Art in France, the Thirteenth Century, Princeton, 1986, p. 69. Male's great study is available in paperback under the title, The Gothic Image.
Posted by Dr. F at 7:20 AM 1 comment: