My wife and I just returned from a two week visit to Italy to see some of the paintings that I have written about over the past few years. It was a very meaningful trip for us since it will probably be the last time we ever travel out of the USA. The high point was our visit to the Accademia in Venice where we were surprised to find that Giorgione's Tempest had been given pride of place in a great hall that also featured a small Bosch exhibition.

Below is an abstract of my paper on the Tempest delivered in April, 2010 at the annual meeting of the Renaissance Society of America, held that year in Venice. The full paper itself can be found on my website, MyGiorgione.


Abstract: This paper identifies the subject of Giorgione’s "Tempest" as "The Rest on the Flight into Egypt." This interpretation is the only one that identifies all the major elements in the painting. The nude woman nursing an infant is the Madonna. The man standing at the left functioning as an “interlocutor” is St. Joseph with his staff. The broken columns featured so prominently are commonplace in depictions of the Rest on the Flight into Egypt. The city in the background is Judea from where the Holy Family has fled but could also be equated with Padua during the Cambrai war. The scraggly plant in the foreground is identified as a “belladonna” a plant associated with witchcraft and the Devil. No other interpretation of this painting has even attempted to identify the plant.

The great difficulties of this interpretation, the “nude Madonna” and the “young” Joseph, are dealt with in the paper. The nude Madonna is Giorgione’s idiosyncratic way of depicting the concept of Mary’s Immaculate Conception, a doctrine of great importance at the time, especially in Venice. If the association with the War of Cambrai is correct, this interpretation dates the painting in 1509, a year before Giorgione’s death.

The paper also does discuss the relevance to the “Tempest” of a heretofore misidentified copy by David Teniers of a “lost” Giorgione. This painting is usually identified as “The “Discovery of Paris,” but it is actually Giorgione’s depiction of an apocryphal episode on the Flight of the Holy Family into Egypt which I call "The Encounter with the Robbers on the Flight into Egypt." ###


The first stop on our Italian journey was Rome primarily to visit the Borghese Gallery and see once again its most famous possession, Titian's Sacred and Profane Love. I have interpreted the subject of that painting as "The Conversion of Mary Magdalen." Below is an abstract of a paper that was presented at the annual meeting of the South Central Renaissance Conference in New Orleans in 2012. The full paper can be found at MyGiorgione.

This paper identifies the subject of Titian’s Sacred and Profane Love as the Conversion of Mary Magdalen. This interpretation identifies all the major elements in Titian’s famous painting. The finely dressed Woman is Mary Magdalen as a Venetian courtesan contemplating a life changing decision. The nude Woman is the converted Magdalen in the process of throwing off her worldly finery as a prelude to a life of fasting and mortification. In her hand she holds the jar of ointment that is found in practically every depiction of the great sinner/saint.

Seeing Mary Magdalen in the painting opens the way for the interpretation of the other iconographical elements in the painting. Wild roses, red garments, and flowing red hair are commonly associated with Mary Magdalen. Even the landscape can be related to her story.

The sarcophagus like fountain that connects the two women is a symbol of the new life of the convert through Baptism. An angel, not Cupid, stirs the waters. The antique relief, which so far has eluded explanation, can now be seen to depict three great sinners. Adam and Eve stand around the tree to the right. Toward the center Cain murders his brother, Abel. At the left, St. Paul falls from his horse on the road to Damascus.

Next to the Madonna, Mary Magdalen was the most popular female saint of the Middle Ages and Renaissance. Titian became the most prolific painter of the Magdalen during his long career. He even admitted that he viewed her as an intercessor. The patron of the Sacred and Profane Love, like most Venetians, was of the same mind. ###

After Rome we traveled to Florence to visit the Pitti Palace and the Uffizi for the last time. At the Pitti we wanted to see a painting by Giorgione that is usually called the Three Ages of Man.  I have interpreted its subject as "The Encounter of Jesus with the Rich Young Man." The paper can also be found at MyGiorgione. Many paintings in the Pitti Palace are difficult to see because of their placement and lighting, but the Giorgione is placed very nicely between a doorway and a window. On the other side of the doorway is Raphael's La Donna Veleta, a nice juxtaposition since the careers of both of these young artists were cut short by early deaths.


At the Uffizi we especially wanted to see, along with everyone else in the crowd on Saturday morning, Michelangelo's Doni Tondo. Just last year I posted on this site a series of essays on that famous painting and ultimately posted a full paper at MyGiorgione. I argued that Mary is actually elevating her Child in the same way that a priest elevates the Host at the Consecration of the Mass. The multitude of tourists straining to see the painting seemed like so many worshippers. 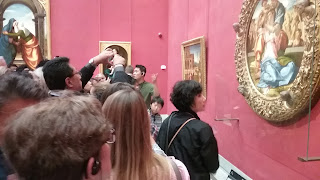 After Florence it was on to Venice to see the Tempest, and then to Milan to see the beautifully renovated Brera. Raphael's Sposalizio, his depiction of the engagement of Mary and Joseph, is beautifully displayed. In that painting Raphael portrayed Joseph as a virile young man just as Giorgione's did five years later in the Tempest. Neither of these young artists chose to portray Joseph as a vecchio.


Of course, our Italian journey included much more but that can wait for subsequent posts.


Note: Dr. Francis P. DeStefano holds a PhD in History from Fordham University but he is not associated with any educational institution. Although early in his career he taught History at a university in Fairfield, CT, he left teaching to build a financial planning practice. He retired in 2008 and now devotes himself to writing and lecturing on History, especially Art History.

Dr. DeStefano currently resides in Fairfield, Ct. His email address is drdestefano@mac.com.
Posted by Dr. F at 6:53 AM No comments: