In my last post I listed my four major interpretive discoveries concerning some of the most famous and mysterious works of the Venetian Renaissance. Although I believe that the name of Giorgione’s “Tempest” should never be changed, it does depict “The Rest on the Flight into Egypt”. Also, his “Three Ages of Man” in the Pitti Palace represents the “Encounter of Jesus with the Rich Young Man”. Titian’s “Sacred and Profane Love” should now be seen as “The Conversion of Mary Magdalen”, and his “Pastoral Concert” could best be understood as Titian’s “Homage to the Deceased Giorgione” utilizing the biblical story of David and Jonathan.

My work on these interpretations has led to a number of other significant discoveries concerning heretofore mysterious or mis-understood paintings. In this post I will list two that have already been discussed on this blog as well as on my site, MyGiorgione. 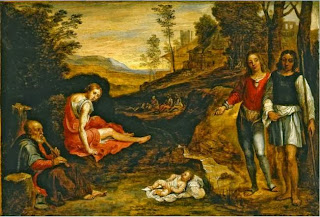 The first is a painting that is usually called “The Discovery of Paris.” In 1525 Marcantonio Michiel saw this painting in the home of Taddeo Contarini and described it as follows.

The picture on canvas, representing the birth of Paris, in a landscape, with two shepherds standing, was painted by Giorgio di Castelfranco, and is one of his early works. [104]

The editor of Michiel’s notes pointed out that only a fragment of this early Giorgione painting survives but that there does exist a seventeenth century copy by David Teniers. The editor referred to a description in an old manuscript  catalogue.

A landscape on canvas, in oil, where there are on the one side two shepherds standing; on the ground a child in swaddling-clothes, and on the other side, a half nude woman and an old man, seated, with a flute.

This early Giorgione is a very important painting since Michiel’s description has been almost universally accepted and some eminent scholars have even based elaborate interpretations of the "Tempest" on Giorgione’s apparent awareness and fondness for the legend of Paris. However, Michiel guessed wrong and I believe that Giorgione has actually represented “The Encounter with Robbers on the Fight into Egypt”, a popular apocryphal legend.

In my interpretation the painting takes on new importance since it reinforces my interpretation of the Woman in the “Tempest.” In this painting Giorgione has dared to depict a Madonna with bare leg in danger of sexual assault. A full discussion of this lost Giorgione can be found in my “Tempest” paper or on its own at MyGiorgione.

There is no disagreement about the subject of Giorgione’s “Judith” that now hangs in the Hermitage. The mystery of that painting revolves around the bare leg of the Jewish heroine. Its prominence is striking and to some shocking. No good explanation has so far been offered. However, I believe that I have found the reason for the bare leg in the Book of Judith itself. Just as in “The Encounter with the Robbers” Giorgione uses a bare leg to indicate a woman in danger of sexual assault. In each case they are spared by their trust in God. The essay with biblical text can also be found at MyGiorgione.

Email ThisBlogThis!Share to TwitterShare to FacebookShare to Pinterest
Labels: Discovery of Paris, Judith


This September marks the third anniversary of Giorgione et al… Previously, I had created a website for my work on Giorgione's Tempest but was advised that blogspot would reach a wider audience. Seeing the Tempest as a sacred subject, "The Rest on the Flight into Egypt", provided the key that opened the door to a number of other new interpretations of equally famous and mysterious paintings of the Venetian Renaissance. Below are brief summaries of the four major interpretive discoveries. In a subsequent post I will list a number of secondary but significant discoveries that have arisen from my work on Giorgione and Titian.

Discussions of these interpretations can be found throughout Giorgione et al... by clicking on the labels or using the search box. The full papers have been published at MyGiorgione.

Incredibly, I am not a professional art historian. Although I hold a doctorate in History my field of study was eighteenth century British politics, and I left academe in 1972. Until my retirement in 2007 I was a financial advisor. Only in the last few years did travel and some other factors lead me to Venice. 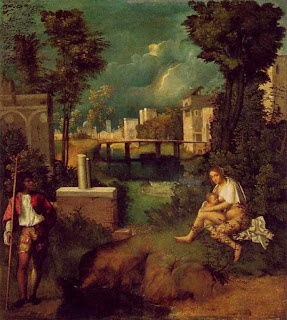 Giorgione: The Tempest. In the fall of 2005 I interpreted the subject of the Tempest as “The Rest on the Flight into Egypt.” In this interpretation all the major elements in the painting are identified. The nude woman nursing an infant is the Madonna. The man standing at the left functioning as an “interlocutor” is St. Joseph with his staff. The broken columns are commonplace in depictions of the “Rest on the Flight into Egypt.” The city in the background is Judea from where the Holy Family has fled but could also be equated with Padua during the Cambrai war. The scraggly plant in the foreground is identified as a “belladonna” a plant associated with witchcraft and the Devil. Even the bird on the distant rooftop is shown to be derived from a famous Psalm. A short essay was published in the Masterpiece column of the Wall St. Journal In may, 2006. In 2010 I presented a paper on the “Tempest” at the annual meeting of the Renaissance Society of America held that year in Venice.

Titian: Sacred and Profane Love. In 2010 after a visit to Rome’s Borghese Gallery, I realized that the subject of Titian’s Sacred and Profane Love was the Conversion of Mary Magdalen. In this interpretation all the elements in Titian’s famous painting are identified. The finely dressed Woman is Mary Magdalen in the guise of a Venetian courtesan. The nude Woman is the converted Magdalen in the process of throwing off her worldly finery. In her hand she holds the jar of ointment that is found in practically every depiction of the great sinner/saint. The antique relief on the sarcophagus-like fountain, which so far has eluded explanation, can now be seen to depict three great sinners: Adam and Eve, Cain and Abel, and St. Paul falling from his horse. In 2012 I presented my interpretation of the Sacred and Profane Love at the annual meeting of the South Central Renaissance conference in New Orleans. 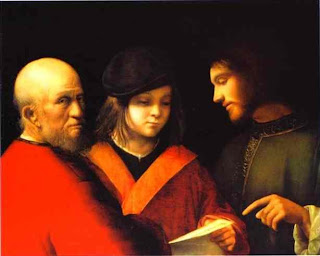 Giorgione: Three Ages of Man. After seeing the Tempest as a “sacred subject” I was able to take a fresh look at some of his other mysterious paintings. For example, I discovered the subject of the Three Ages of Man to be the Encounter of Jesus with the Rich Young Man derived from an episode in the Gospel of Matthew. So far there has been no scholarly agreement on the subject of this famous depiction of three half-length figures that now hangs in the Pitti Palace in Florence.  The young man in the center, whose clothing indicates his wealth, has just asked how he can achieve eternal life. On the right, Jesus dressed in a green vestment points to the commandments that he has directed the man to follow. On the left, an aging, bald Peter, dressed in martyr’s red, invites the viewer to enter the scene. 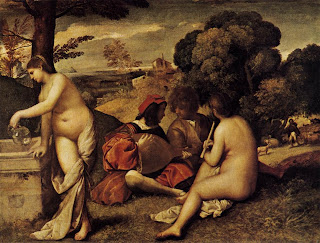 Titian: Pastoral Concert. Earlier this year I argued that this famous and mysterious painting whose attribution has been variously given to Giorgione and Titian should be considered as Titian's Homage to Giorgione. There are signs in the painting that the finely dressed lute player is not only Giorgione, but also that he has recently died. His face is in shadow; the lute has no strings; and the female muse at the left is pouring out his soul into the well. I believe that all the Giorgionesque elements in the painting were  put there by Titian in homage to his mentor. The shepherd and flock in the background indicate that Titian, the young rustic on the right, portrayed himself as David grieving over the loss of Jonathan. Both the female nudes are the muse, Euterpe.

Needless to say, these interpretations have not met with acclaim in the scholarly community. It is my hope that young scholars and students (with better tools and more energy than I possess) will be open to see with their own eyes and explore the possibility that Venetians living during the Renaissance were primarily interested in beautiful renditions of traditional sacred subjects.