Giorgione: the Solitary Bird in the Tempest

In my interpretation of Giorgione's Tempest as "The Rest on the Flight into Egypt" I identified the nude Woman nursing the Child; the Man holding the staff; the broken columns; the City in the background; and even the plant in front of the Woman. I must confess that until a discussion at the popular art history blog, Three Pipe Problem, I had not seen the need to identify the solitary bird on the rooftop in the City. See here for the discussion on 3PP. Below is the original post dated 11/5/2010 that identified the bird on the rooftop lamenting the Massacre of the Innocents symbolized by the storm.* 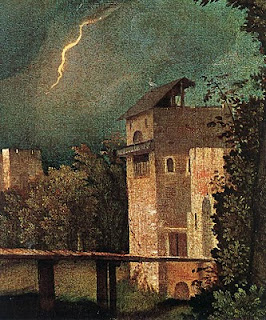 The source of the bird barely visible on a rooftop in the background of Giorgione's "Tempest" can be found in Psalm 102, one of the seven penitential psalms. Here are the verses from the Jerusalem Bible (102, v.7-8), and the Latin Vulgate (101, v. 7-8).
I live in a desert like the pelican, In a ruin like the screech owl, I stay awake, lamenting Like a lone bird on the roof; {101:7} Similis factus sum pellicano solitudinis: factus sum sicut nycticorax in domicilio. {101:7} I have become like a pelican in solitude. I have become like a night raven in a house. {101:8} Vigilavi, et factus sum sicut passer solitarius in tecto. {101:8} I have kept vigil, and I have become like a solitary sparrow on a roof. Latin Vulgate, Psalm 101.
It is difficult to identify the solitary bird hardly visible on a rooftop in the city in the background of Giorgione’s famous painting. In his 2007 catalog Wolfgang Eller was one of the few to take notice but he could neither make a positive identification nor offer an explanation. “A white bird with a long neck sits on the ridge of this roof. The depicted bird is probably neither a heron nor a cormorant, since both of these have a straight neck when they are seated;” Wolfgang Eller: Giorgione, Catalogue Raisonee, p. 95. Never mind that the bird appears to be standing, this was all Eller had to say.
In 2004 Waldemar Januszczak identified the bird as a crane to support his rather fanciful BBC TV interpretation of the Tempest as the story of Demeter and Iasion taken from one sentence in Homer’s Odyssey. He argued that a crane is often shown with the goddess, Demeter. He paid a lot of attention to this little figure in the background but failed to explain why Demeter is nursing one child although she had twins by Iasion.
I was led to the Psalm interpretation after browsing the web for images of various crane like birds. The innumerable images available made it difficult, especially when trying to distinguish between cranes, herons, bitterns, storks, and even pelicans. Despite it’s curved beak even an ibis seemed possible. 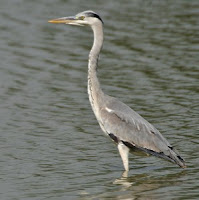 Then, I recalled that Giovanni Bellini had depicted a Grey Heron in his St. Francis in the Desert, now in New York’s Frick Museum. John Fleming’s study of this famous painting provided the answer. Here is his explanation of Bellini’s pelican. “In ornithological terms, the “pelican” seems to be any large bird, especially any large water bird. In poetic terms, the pelican is almost any desert bird, so that the pelican and the passerus are treated as equivalents in monastic texts….”

Of course, Fleming was discussing Bellini’s "St. Francis" and not Giorgione’s "Tempest". Nevertheless, a solitary bird on a roof lamenting the massacre of the Holy Innocents symbolized by the storm is certainly appropriate in a depiction of the “Rest on the Flight into Egypt.” Even more if it is a large water bird associated with the desert and the Nile Delta.

Finally, there is the obvious connection with Franciscan spirituality. Below are some notes from Fleming’s study, From Bonaventure to Bellini, an Essay in Franciscan Exegesis.

Giovanni Bellini’s desert is the Tuscan mountain called La Verna, but we must be prepared to discover that its flora and fauna are those of the Levant. That is to say, while the artist’s command of animal anatomy and vegetable forms reveals a close empirical observation, his vision of animal ecology would seem to reflect the literary sources of the Scriptures, and his desert wildlife gives visual form to the poetic diction of the Psalms, Isaiah, and Job. P. 35.

[Desert hermits] “By their aspirations and deeds they join voice with the Psalmist: “I am become like to a pelican of the wilderness, I have watched, and I have become as a sparrow, all alone on the house top’” [Ps. 101: 7-8] p. 37.

[Desert birds] “ In the famous passage of Cassian’s history of the monastic life, that life’s highest form, eremitic anchoritism, is betokened not merely by a desert beast, but also by desert birds…. So masterful is Bellini’s technique that we can identify them with certainty as a grey heron and a bittern, as we would name them today. P. 40-41.

A cursory iconographic survey of the well-known emblem of the “Pious Pelican” in the Middle Ages and Renaissance will reveal an entire aviary, birds we would be disposed to call pelicans, egrets, herons, eagles, storks, and swans, not to mention many that we would be hard pressed to give a name to at all. In ornithological terms, the “pelican” seems to be any large bird, especially any large water bird. In poetic terms, the pelican is almost any desert bird, so that the pelican and the passerus are treated as equivalents in monastic texts…. (p. 42)

It is Augustine who underscored for us these associations of the pelican that are most poetically appropriate for Bellini. The pelican is a dweller of the Nile, a water bird and an Egyptian bird. Bellini gives us a wonderful rendition of a large and solitary water bird, an ancient symbol of the eremitic life…(p. 44)**

** John Fleming, From Bonaventure to Bellini, an Essay in Franciscan Exegesis, Princeton, 1982.