The broken columns and ruins in Giorgione's Tempest must be discussed in any plausible interpretation. In my interpretation I showed that they were commonplace in depictions of the "Rest on the Flight into Egypt." After delivering my paper at a conference in Venice in 2010, my wife and I stopped over in Orvieto before proceeding on to Rome. We wanted to revisit the famous cathedral of the beautiful hill-top city. In particular, we wanted to see the St. Brisio chapel with its frescoes by Fra Angelico and Luca Signorelli. 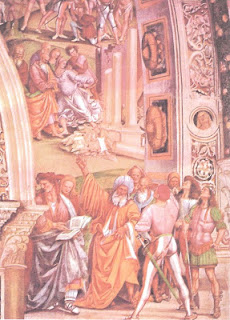 Imagine my surprise when I noticed the columns depicted in the above image. Scholars have pointed out the connection between the work of Luca Signorelli in the S. Brisio chapel in Orvieto and the work of Michelangelo and Raphael. Perhaps, there is also a connection between Signorelli and Giorgione. Begun in the middle of the fifteenth century by Fra Angelico, the frescoes of the famous chapel were completed by Signorelli between 1499 and 1504. The “outer bay” of the chapel contains Signorelli’s version of the end of the world.

“One may take these to be the tribulations that Luke had described just before in the same chapter, where people are told to flee and are led away as captives, while no stone is left on another. These are precisely the motifs Signorelli shows us, with people running from a ruined colonnade, a nearby building showing cracks, and soldiers tying people up.” p.139.

The ruined colonnade is actually three truncated white columns standing erect surrounded by rubble. In his book on the Tempest Salvatore Settis provided a number of broken column images but none were as similar to Giorgione’s or as close in time as the ones in the S. Brisio chapel. Signorelli’s use of the broken columns could not be clearer. It indicates the destruction of the World.

In "How Fra Angelico and Signorelli Saw the End of the World" Creighton E. Gilbert tried to identify the sources for Signorelli’s whole iconographic scheme in the S. Brisio chapel. He argued that two prominent churchmen, both associated with Orvieto, might have played pivotal roles. One was the young Cardinal Alessandro Farnese, the future Pope Paul III, and the other was a famous Venetian cardinal.

"In this scenario a second powerful name should be mentioned, that of Cardinal Grimani, whose connection both with connoisseurship and with the Borgia group in control of Orvieto have been observed. It would be logical to see him seconding a proposal by Farnese." p. 115.

Domenico Grimani was the son of the famous Doge as well as the Patriarch of Aquileia. He was also an avid art collector who is perhaps most well known for the magnificent illustrated Grimani Breviary. Gilbert points out that Grimani had strong ties to Orvieto.

"Grimani too visited Orvieto in 1493 and 1495 with Farnese, Borgia, and the rest. More of interest is that in 1505 he built himself a vacation house below the city walls, at the abbey of Santa Trinita." p. 81.

Signorelli’s work was completed in 1504 and the Tempest painted in 1509. It is not difficult to imagine Grimani describing Signorelli’s justly famous frescoes to eager Venetian hearers. Certainly, Giorgione’s use of the broken columns to symbolize the Fall of the Egyptian idols on the Flight into Egypt is strong evidence for the Grimani connection. On the other hand, the idea could have been conveyed to Signorelli by Grimani.

Another sign of the connection between Signorelli and Giorgione is in the use of nudity. The following quotes from Gilbert’s work point out the novelty of Signorelli’s approach to nudity,

“These saved are innovative in their nudity, surely unlike what Angelico had projected. All previous Judgments in this tradition contrasted the clothed saved with the naked damned,…This innovation, as such, seems not to have interested writers. Perhaps they found it only what one would expect in 1500, in the emerging High Renaissance, especially from a painter praised as an anatomist. Yet a closer look is surely warranted. At this period the saved appeared nude, outside a High Renaissance context, in the great sequence of Judgment paintings in northern Europe. …This was a time when the theme did not flourish in Italian painting. The nudity was logical in that the souls were regularly seen emerging naked from their tombs… Mainstream theology always affirmed that they would then be perfect bodies…." p. 80. "The nude saved do appear in Italy before Signorelli in various less noticeable contexts, presumably under northern influence…. The saved appear nude more conventionally in a large Venetian woodcut around 1500, possibly later than Signorelli…" p. 81.

In the S. Brisio chapel Signorelli also depicted a nude Judith. This famous Jewish heroine was commonly regarded as a precursor of the Virgin Mary. Gilbert noted this unique portrayal as well as a northern equivalent.

"Also about 1508, he [Niccolo Rosex da Modena] engraved a nude Judith, inscribed with her name. She is the only one in Italy of this period other than Signorelli’s monochrome found in this same outer bay of the chapel." p. 147. 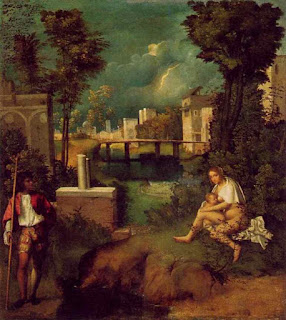 About five years after Signorelli completed his work in the S. Brisio chapel, Giorgione painted a nude woman nursing her child in the Tempest. Is it really that unimaginable to consider that she might be the Madonna?

Gilbert, Creighton E.: How Fra Angelico and Signorelli Saw the End of the World, Penn State, 2003.

Note: This post is slightly revised from the original posted over 10 years ago.