Titian’s so-called Sacred and Profane Love is one of the most important and mysterious paintings of the Renaissance. One of its most mysterious features is the relief on the front of the sarcophagus like fountain.

Almost ten years ago, in my interpretation of the painting as the “Conversion of Mary Magdalen” I was able to identify the scenes depicted on the relief and fit them into the overall subject of the painting. The explanation of the relief, despite its central position, had defied even the greatest scholars.

Erwin Panofsky included a discussion of The Sacred and Profane Love in his long essay on the Neoplatonic Movement in Florence and North Italy. The essay was published in 1939 along with others in his classic work, “Studies in Iconology”. The essay explored the philosophical work of Marsilio Ficino, and Panofsky used Titian’s painting as an example of Neo-Platonic themes. His essay became the starting point for all future discussions of the painting, and his "Two Venus" interpretation was widely accepted.

However, he did not discuss the relief and just relegated this admission to a footnote. “The reliefs on the sarcophagus invented by Titian in the classical style, have not yet been explained.”*  In the 1962 paperback re-issue Panofsky noted some criticisms of his essay but he still did not attempt to discuss the relief or alter the footnote. He was still not able to fit this piece of the puzzle into the picture.

In 1978 David Rosand accepted Panofsky’s Neo-Platonic "Twin Venus" interpretation and did attempt an explanation of the relief.

a third type is depicted on Titian's invented sarcophagus relief: bestial love-pure lust, which seeks not beauty and its procreation but rather mere satisfaction of sexual appetite-is symbolized by the unbridled force and the accompanying acts of passion and violence.**


A few years later Rona Goffen, who wrote more on the painting than any one else, was obviously unsatisfied with Rosand's explanation but could only hazard a guess about the relief.

Finally, in his Titian catalog of 2007 Peter Humfrey could only call the relief “Titian’s own invention" and leave it at that. #

The relief is not an insignificant detail. It is boldly presented right in the center of the painting. Why could these four great scholars with all their skill and ability not be able to see its real meaning? I think it is more than just my imagination that led me to see three great sinners depicted on the relief in a painting whose subject is Mary Magdalen, the greatest of sinners? On the viewer's right is Adam and Eve standing around the Tree. On the left is a man falling from a horse that can only be St. Paul. But just to the right of center there is an act of violence that depicts Cain and Abel.

This striking image depicts a man with his arm raised as if to strike a blow on the man lying prone on the ground. Is this such an unusual image? Is it Titian's own invention or is it a commonplace in depictions of Cain and Abel. the first instance of sin after the Fall?

Titian himself painted Cain and Abel approximately 30 years after the Sacred and Profane Love.

Here is Tintoretto's version of the act of violence.

Rather than inventing this scene it would appear that Titian and Tintoretto were just following the standard universally accepted template for Cain's murder of his brother. In the Ghent Altarpiece Jan van Eyck used the same motif and even painted it as a sculpted relief.

*Panofsky, Erwin: “The Neoplatonic Movement in Florence and North Italy (Bandinelli and Titian),” in Studies in Iconology, Humanistic Themes in the Art of the Renaissance, Oxford 1939, Reprint 1962, p. 152.

Perhaps the most spectacular work of art in the magnificent collection of Rome’s Borghese Gallery is Titian’s “Sacred and Profane Love,” one of the great masterpieces of the Venetian Renaissance. Early in the last century a collector offered more for this one painting than the appraised value of the entire Museum. Measuring over 9.5 by 3.5 feet, this beautiful painting seems to dominate one of the most beautiful rooms in the entire gallery.

Despite its fame there has never been agreement on the subject of Titian’s painting. The title “Sacred and Profane Love” was only attached to it long after Titian’s death in an attempt to describe the two beautiful fair-haired women in the foreground. One is fully clothed in a sumptuous gown, and the other is semi-nude except for garments that billow around her but only cover her privates.

Commentators have always noted the resemblance between the two women. Some call them sisters, even twins. Most scholars have accepted the view, expressed by famed Art historian Erwin Panofsky about 75 years ago, that the women are versions of a Neoplatonic Venus, one earthly and the other celestial.

More recently, the late Rona Goffen argued that Titian represented one woman in two guises. The woman was an idealized version of a bride, chaste and sexual at the same time. Indeed, the painting appears to commemorate the marriage in 1514 of a young widow, Laura Bagarotto, to a Venetian official, Niccolo Aurelio, whose coat of arms can be seen on the mysterious fountain.

I agree that Titian did depict one woman in two separate guises, but the only person who could be portrayed at the same time as a well- dressed, even sumptuously dressed, woman, and as a semi-nude figure is Mary Magdalen, whose perceived life was the epitome of sexuality and chastity.

During the Renaissance the sinful and fallen women of the gospels were all considered to be Mary Magdalen. Indeed, it was the imputed sinfulness of her life that brought her nearer to her devotees. She was the sinner with the heart of gold who had finally seen the light. In Venice a long established tradition of venerating the penitent Magdalen went hand in hand with the largest concentration of prostitutes in Europe.

Artists often depicted the Magdalen as a richly attired and seductive courtesan contemplating the folly of her life and considering the opportunity that had been opened up to her by the words of Jesus to sin no more. She could, however, also be portrayed as a semi-nude penitent sinner fasting and mortifying herself, according to legend, in a desert. Donatello’s penitent Magdalen; gaunt, haggard, and covered almost entirely by long hair that reaches to her ankles is the most famous fifteenth century version.

Apparently Venetian patrons preferred a beautiful to a gaunt Magdalen. Usually, she would be depicted in the vestiges of her finery but at the same time tearful, sorrowful, and disheveled with breasts fully or partially exposed.

Titian became the most prolific and famous painter of Mary Magdalens. His half-length depictions of a beautiful, full-figured semi-nude show her long red hair around her body but parted to reveal bared breasts. She looks upward with the jar of ointment-- used to anoint Jesus-- beside her. 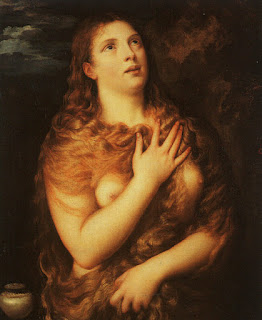 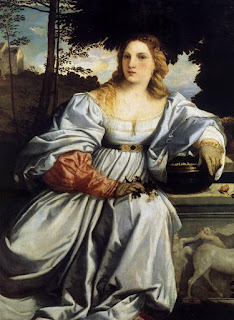 We notice the woman’s beautiful red hair so characteristic of Titian’s later Magdalens. The red color of her sleeve is also a Magdalen attribute as is the sprig of wild rose she holds in her hand. Her left hand rests on a container that could hold her jewels and perfumes. Both hands are gloved. Mary Magdalen was the patroness of all those engaged in producing female luxury items like perfumes and gloves. 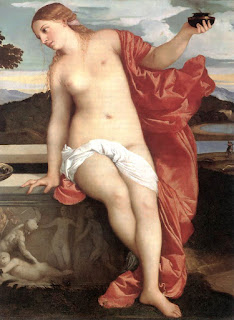 On the right the semi-nude woman is the newly converted, penitent Magdalen rejecting her jewels and finery. Legend had it that she spent the last 30 years of her life fasting and mortifying herself in a desert outside of Marseilles. The converted sinner in the “Sacred and Profane Love” has the same flowing red hair as well as the red garment of the courtesan. In her left hand she holds aloft the jar of oil that is the single most recognizable symbol of Mary Magdalen.

Titian joked of his Magdalens that he liked to portray them at the beginning of their fasting rather than as thin, wasted figures. Joking aside, in the “Sacred and Profane Love” Titian could actually be portraying the moment of conversion.

Both the Magdalens sit on a sarcophagus-like fountain that further serves to connect them. The wild rose bush in front is also a traditional symbol of Mary Magdalen. The fountain is a puzzle in itself and the relief has also eluded identification.

There are three scenes on the relief and we can now see that they depict great sinners. On the far right two nudes stand on each side of a tree. The figure on the left is Eve portrayed in her usual full frontal nudity. Adam is on the other side of the tree. Moving toward the center we see an act of murderous violence that represents the story of Cain and Abel, the first incident of sin after the Fall.

On the other side of the relief a man leads a horse whose rider appears to be falling off. The falling rider can only be St. Paul, one of the few sinners capable of being mentioned in the same breath as Mary Magdalen. In his letter to Timothy, Paul called himself the greatest of sinners.


If there was any woman in Venice who thought of turning to Mary Magdalen as an intercessor, it might have been the wife of the man who commissioned the painting. The arms of Niccolo Aurelio, a Venetian official, can be seen on the fountain. In 1514 he married Laura Bagarotto, a widow from Padua, whose father, as well as her husband, had been accused of treason in 1509 by the Venetian government for collaboration with the enemy during the War of the League of Cambrai. The husband most likely died in the war and the father was publicly hanged in the Piazza di San Marco, an execution that his wife and daughter were forced to witness.

Laura’s goods, including her substantial dowry, were confiscated. Subsequently, she campaigned for the restoration of the family’s good name as well as for the restoration of the dowry. Her marriage to Niccolo Aurelio in 1514 must have been an important step in her rehabilitation since her dowry was only restored the day before the marriage. One would like to think that Niccolo was honoring his new wife, or seeking to aid in her rehabilitation with this painting.

Given the ups and downs of her own life, Laura Bagarotto might have looked to the Magdalen as a patron. On that fateful day in 1509 she lost both her father and her patrimony. If she had not been a woman, she might have lost her own life. Eventually, she would provide the aging Niccolo with a beloved daughter and then a male heir. Who can doubt that she had prayed to the Magdalen, the patron saint of all women hoping for a family?

* Note. I first saw the painting on a visit to the Borghese Gallery in 2010, shortly after presenting a paper on Giorgione"s Tempest at the annual meeting of the Renaissance Society of America held that year in Venice. The full annotated version of my interpretation of Titian's painting can be found on my website, MyGiorgione. This shortened version originally appeared in 2012 on the popular art history website Three Pipe Problem whose creator, Hasan Niyazi, died tragically in 2013.
Posted by Dr. F at 7:04 AM No comments: