A post, dated May 6, 2012, on Titian's famous painting, The Sacred and Profane Love, has been the sixth most popular post on Giorgione et al... since its inception in 2010. It has received over 3200 page views. As noted in the post, it was an intuition, while standing in front of Titian's painting in Rome's Borghese Gallery, that led me to see Mary Magdalen.  The intuition led to research that resulted in a new interpretation of this painting that I believe should be called The Conversion of Mary Magdalen.

My wife and I first saw Titian’s Sacred and Profane Love on a visit to the famed Borghese Gallery in Rome in the spring of 2010. We were in Rome for a few days at the end of a journey that had begun in Venice where I delivered my paper on Giorgione’s Tempest at the annual meeting of the Renaissance Society of America.
After the conference we visited Florence and Orvieto and wound up in Rome to complete our journey. However, once in Rome we discovered that we were among the multitude stranded there because an eruption of a volcano in Iceland had shut down most air travel from Europe. It was a nerve-wracking experience but we were in a lovely hotel not far from the Spanish Steps and the Pantheon. We had no choice but to enjoy a few extra days in Rome.
So one day my wife suggested we visit the Borghese, a site that due to my ignorance we had never visited before. The Villa Borghese is located in a huge beautiful park right across the street from the fashionable Via Veneto. Even though a sign at the door said sold out, we entered and had no trouble gaining admission.
In 1909 Edward Hutton, an Englishman who would go on to spend most of his life in Italy, introduced the Borghese in this fashion.*

The Villa was built in the early years of the seventeenth century by Cardinal Scipione Borghese…and was bought, with its magnificent collection of pictures, and beautiful gardens and parks, by the Italian government for 144000 lira, much less than its real value, in 1901. 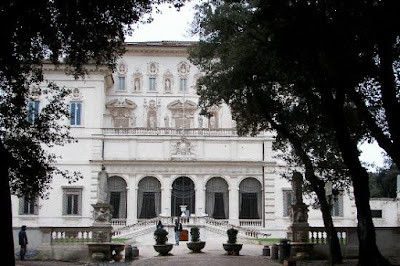 the chief glory of the villa, however, lies in its park and gardens, which have a circumference of nearly four miles and contain a riding school, an amphitheatre, a lake, an aviary and fountains. ‘Classical’ temples and ruins are dotted here and there among the shady walks of the great boschi of ilex. In assembling so many diverse buildings within the compass of one vast part it is tempting to think that perhaps Cardinal Scipione intended to create a villa on the lines of that of the Emperor Hadrian at Tivoli.**

Walking through the park was a beautiful experience but we had come to see the collection within the Gallery. We were not disappointed. The collection of statuary on the first floor was incredible including famous works by Bernini and Canova. However, it was the second floor that blew us away. I share the feelings of Edward Hutton expressed over a 100 years ago.

But it is really the Gallery of Pictures which calls for our wonder and admiration, since it is, perhaps, the finest private collection of the Italian masterpieces of the sixteenth century anywhere to be found….
the true glory of the gallery consists not only, or even chiefly, in the work of Raphael, but in three works by the greatest master of that or any other period, Titian, who is represented by three pictures, the first belonging to his youth, the others to his old age....

The Sacred and Porfane Love, painted about 1512 for Niccolo Aurelio, Grand Chancellor of Venice, is the highest achievement of Titian’s art at the end of his Giorgionesque period. It has been in this collection since 1613, when it was called…’Beauty unadorned and Beauty adorned.’ In fact, the name it now bears, which has so puzzled the world, does not occur till the end of the eighteenth century, when it seems to have been given it by the Germans. For us, at least, it can have no authority, the subject of the picture being merely a moment of beauty,--a moment gone, but for Titian’s genius, while we try to apprehend, in the golden summer heat, under the trees by a fountain of water….

No photograph or digital image can do justice to the Sacred and Profane Love. It is over nine feet long and seems to take up almost an entire wall in one of the largest rooms. I think that Hutton was right on when he described the subject of the painting as a “moment of beauty.” That is certainly the first impression when looking at the two beautiful female figures in the equally beautiful landscape. Titian’s coloration is also overwhelming. 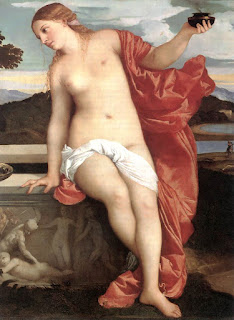 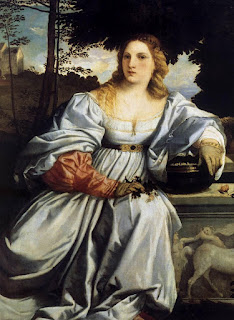 However, I distinctly recall turning to my wife and saying, “It’s Mary Magdalen.” Why? I still don’t know. Nevertheless, after we finally got home, I began to think more and more of the iconographic symbols in the painting, and to do a little research on the Magdalen. I discovered that as in the case of the Tempest, there was no agreement among scholars about the subject of the famous painting. Moreover, recent scholarly studies of Mary Magdalen in history and art provided much material for a Magdalen interpretation.
It took a few months to do the research and to write a first draft that was very kindly reviewed by some art history blogger friends. Eventually, I put the paper on my website and guest posted a condensed version on the popular art history blog, Three Pipe Problem.  *** Earlier this year I presented the paper in New Orleans at the annual meeting of the South Central Renaissance conference. Attempts to publish the paper in a scholarly journal have so far been unsuccessful. #
Sometimes I worry that interpreting beautiful paintings like the Tempest and the Sacred and Profane Love as “sacred” or “religious” subjects might lessen the reverence that these paintings have enjoyed in both the scholarly world and in the popular imagination. For years people have loved these paintings. Part of the allure has been the mystery and enigma that has always surrounded them. Moreover, in today’s secular society would a “sacred” subject turn people off?
I hope not. To me it is the mark of genius to be able to produce beauty that will be admired even by those who don’t see the paintings in the same way that devout contemporary Venetians might have. I know that the Sacred and Profane Love was not originally meant to be hung in the Borghese Gallery but seeing it there in that magnificent setting will always be an unforgettable experience.
In 1909 a young Edward Hutton summed up the experience and fifty years later in the seventh edition of his “Rome” his opinion of the Borghese was the same.

But, after all, what we have come here to see is the Sacred and Profane Love, by Titian, and that will lead us, not from picture to picture in a sudden enthusiasm for painting, but most certainly back again into the gardens, where the world is so sleepily golden in the heat, and the shade so cool and grateful. There we shall linger till, from the faraway city, the Ave Mary rings from all the cupolas, and we must return down the long alleys in the softly fading light, stealing softly, half reluctantly, out of the world of dreams back into the streets and the ways of men. ###

*** Note, 5/5/2017: Three Pipe Problem no longer exists due to the unfortunate and untimely death of its creator, Hasan Nyazi.

# I originally published my papers on my website MyGiorgione but last year I published these and some others at academia.org.

Number 5 on the list of top viewed posts on Giorgione et al... is a brief post originally written ten years ago directing readers to a study of Duccio's Maesta by my English friend and correspondent David Orme. The post was intended to direct readers to David's wonderful exposition of the Maesta that he had put up on his website,  Art Threads. Just click on the Duccio section and you will be able to scroll through all the panels on both the front and rear of the famed altarpiece. 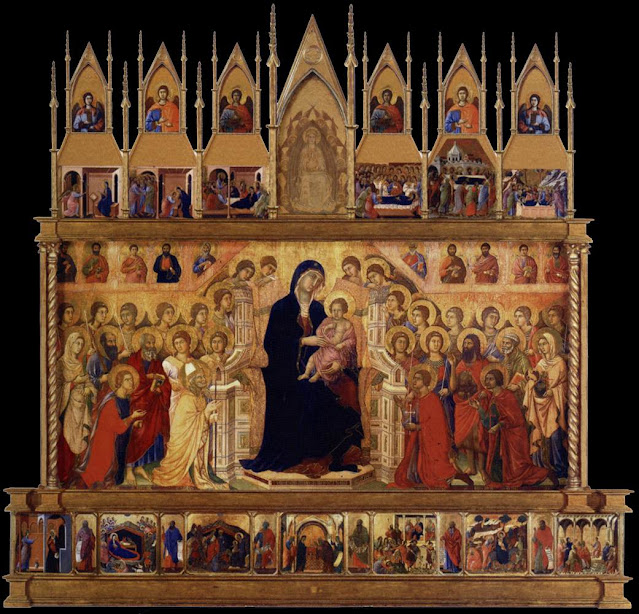 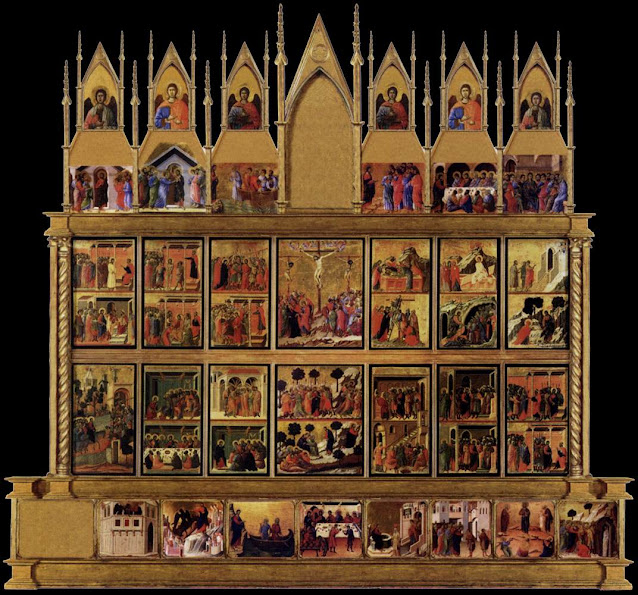 David, a professed agnostic with a love for Italy and its art, has provided the relevant scriptural passages as well as brief comments.

This site is devoted to Giorgione and the Venetian Renaissance but I couldn't resist the opportunity to draw attention to David's work on Siena's famous Maesta, an altarpiece that I now see ranks right up there with Giotto's work in Padua's Scrovegni chapel. ###
Posted by Dr. F at 6:48 AM No comments: