For over 50 years the Frick Museum in New York City has been my favorite museum. It is a small, easily navigated site quite unlike the Metropolitan only a few blocks away on Fifth Avenue. Its magnificent collection of paintings, acquired for the most part during the late 19th and early 20th centuries by steel baron, Henry Clay Frick, spans the gamut of Western art from late Medieval to the Impressionists.* 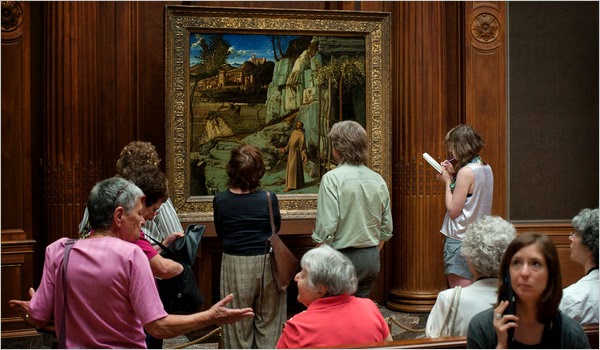 You cannot visit the Frick and fail to notice that patrons invariably stop in the great central living room to stare and wonder at Giovanni Bellini’s famous, “St. Francis in the Desert.” On one occasion a museum employee confirmed my guess that this painting, despite the presence of works by the likes of Titian, Rembrandt, and Renoir, is the most popular in the whole collection.

Born in 1430 Giovanni Bellini is arguably the first great master of the Venetian Renaissance. The Venetian version of the Renaissance has long taken a back seat to the Florentine but in the last few decades it has come into its own and today most scholars would agree that Bellini and his younger successors, Giorgione, and Titian, can hold their own as painters with Leonardo, Michelangelo and Raphael.

Indeed, the Bellini family studio is now seen as one of the great sources of the Renaissance. Giovanni and his brother, Gentile, who at one point went to Constantinople to paint the Sultan, inherited the studio from their father, Jacopo. Andrea Mantegna, a great painter in his own right, married one of the Bellini sisters and exerted a powerful influence on the studio. Scholars also suspect that both Giorgione and Titian were apprentices at the Bellini studio before they broke out on their own.

Although he painted the St. Francis around 1480, Bellini continued to paint well into the next century. Until his death he was sought after and courted by public, religious, and private patrons. He is best known as a painter of Madonnas and groups of figures ranged around the Madonna and Child often called “sacra conversazione.” Nevertheless, the St. Francis is a unique work in the history of Renaissance art. 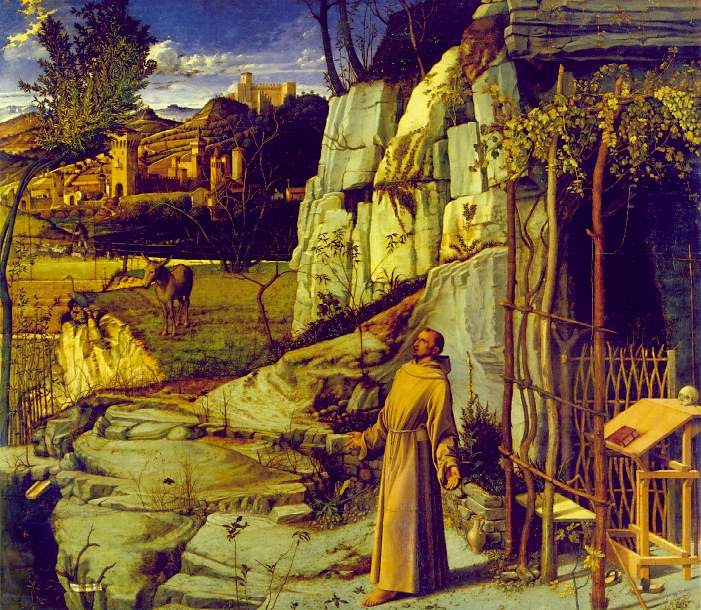 What is going on in the painting? St. Francis stands in the foreground a little off center wearing his familiar robe.  Behind him is a kind of wooden structure that seems to lead into a cave. The mid-ground is largely made up of a barren landscape whose primary occupant is a small horse or ass. Prominent in the upper left is an oddly shaped tree that appears to be leaning toward St. Francis. In the distant background we see a majestic towered city.

In one interpretation of the painting Francis is receiving the stigmata, the actual wounds of Christ on his own body.  His hands are outstretched but it is hard to see if there are wounds. Moreover, traditional elements usually employed in depictions of the stigmata episode are absent. His companion, Brother Leo, is not shown and neither are Christ or an angel.

I prefer the interpretation of John V. Fleming in From Bonaventure to Bellini, an Essay in Franciscan Exegesis. In this often overlooked but extraordinary 1982 monograph Fleming argued that Marcantonio Michiel’s original description of the painting, when he saw it in the home of Venetian patrician, Taddeo Contarini, “St. Francis in the Desert,” was indeed correct.  Fleming saw the subject of the painting and every detail in it grounded in Franciscan spirituality.

The landscape in the painting is not La Verna, the site of the stigmata episode, but the desert of the Old Testament or Hebrew scriptures. In particular, it is the Egyptian desert. The prominent animal in mid-ground is the Onager or wild ass of the desert while the heron standing before it is a bird of the Nile delta. 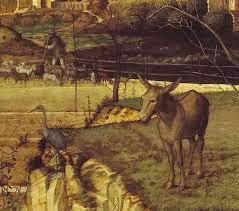 Franciscans often associated their founder with Moses and Elijah and their life in the desert. In the background beneath the city there is a shepherd tending his flock just as Moses did before his encounter with the Lord. Indeed, the leaning tree so prominent in the upper left is the famous burning bush in which the Lord appeared to Moses. It is a laurel which at the time was believed to be impervious to fire.

We also notice that Francis has removed his sandals and stands barefoot in the same manner as Moses.
The wooden structure behind Francis is a Sukkoth, variously translated as tent, hut, booth, or tabernacle, a kind of portable structure used by the Israelites in their wanderings in the desert. The Sukkoth also recalls the scene of the Transfiguration when Christ was revealed in His glory accompanied by Moses and Elijah to the three apostles, Peter, James, and John. Dumfounded, Peter offered to build three booths or Sukkoth for the Lord and his guests. 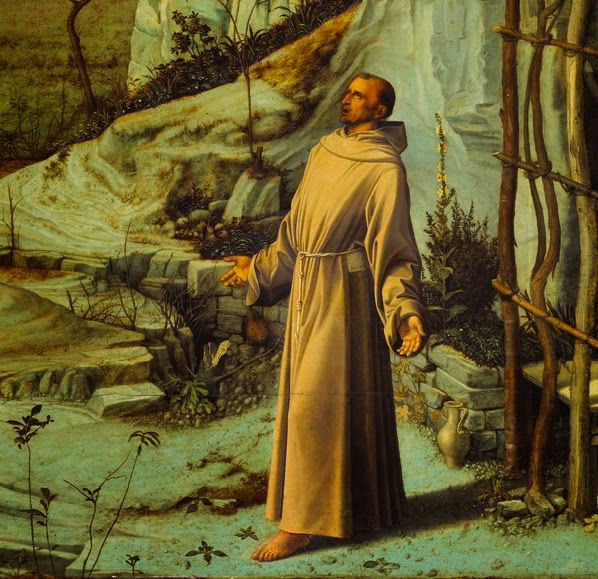 If we look closely, we will see beneath the right hand of Francis a rabbit in a hole in the rock, and beneath his left hand a jug. The rabbit was a symbolic reference to Moses who hid his face from the Lord and the jug is a reference to Elijah. Indeed, the abundant vegetation sprouting around Francis is a garden or carmel, another reference to Elijah who was supposed to have been the founder of the Carmelite order. Francis stands between Moses and Elijah in the same way as Christ stood between them at the Transfiguration. In Franciscan spirituality and imagery, Francis was the new Christ.

Most of the paintings acquired by Henry Clay Frick had a special meaning for him. A committed Mason, Frick admired Francis because of his love of Nature. Others who have viewed the painting since Frick added it to his collection perhaps have had their own reasons for admiring it. Even if we know nothing of Franciscan spirituality, Bellini’s painting is still an image of a human being standing open and receptive to the divine light and transforming the world because of it.

* This review essay originally appeared as a guest post on Hasan Niyazi's popular Art history blog, "Three Pipe Problem." After Hasan's untimely death almost a year ago, his blog has been shut down although hopefully not forever.
Posted by Dr. F at 2:26 PM