This week I have put the latest version of my interpretation of Michelangelo's Doni Tondo on my website, MyGiorgione. Last year at Giorgione et al... I published an initial exploration of the famous painting but then followed it with four essays revising the initial interpretation. Now I have put them all together and available in one place at MyGiorgione. Here is a link. 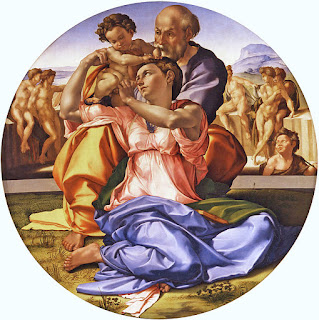 Below are some of the sources that I have used in trying to understand the Doni Tondo.

D’Ancona, Mirella Levi : “The Doni Madonna by Michelangelo: An Iconographic Study.” Reprinted in Michelangelo, Selected Scholarship in English, edited with Introduction by William E. Wallace, New York and London, 1995, V. 1.Life and Early Works, p. 403-412. (numbers in brackets refer to the pages in the Wallace collection).This study first appeared in the Art Bulletin in 1968.

Wallace, William ed.: Michelangelo, Selected Scholarship in English, New York and London, 1995. In addition to the articles on the Doni Tondo mentioned above, this three volume collection contains a number of papers on the Sistine Chapel that shed light on the Doni Tondo.

Whitford, David: The Curse of Ham in the Early Modern Era, Ashgate, 2009.

Below find an image of Luca Signorelli's Medici Madonna, another tondo often compared to the Doni Tondo, especially because of the semi-nude young men in the background. 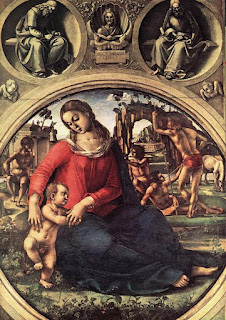