Doni Tondo Revision III: The Nudes in the Background


In recent years the five nude young men in the background of Michelangelo’s Doni Tondo have received as much, if not more, attention than the Holy Family in the foreground. There would appear to be no agreement as to who they are or what they represent. Among other things, they have been variously interpreted as angels without wings, sinners, penitents awaiting Baptism, figures from pagan antiquity, or figures from the Old Testament. 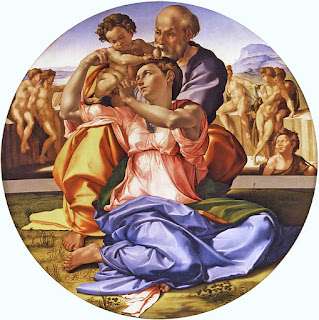 In a paper, entitled “Michelangelo’s Doni Tondo: Holy Family and Family Myth,” Andree Hayum concentrated on the scene in the background. [i] She noted the many different interpretations offered for the five nude men, but found the source in the Old Testament account of the drunkenness of Noah. She saw an obvious connection between the young men and Michelangelo’s famous depiction of the Noah story on the ceiling of the Sistine chapel.

In her interpretation the three men on the viewer’s right in the Doni Tondo would be Noah’s sons Ham, Seth, and Japheth before the incident of their father’s humiliating drunkenness. After drinking of the fruit of the vine, Noah had fallen naked into a stupor in his tent. Ham looked upon his father’s nakedness but the other two averted their faces and covered him. When Noah awoke and realized what had happened, he cursed Ham. Hayum argued that the two innocent or sinless sons are therefore depicted after the episode on the viewer’s left.

In the First Letter of St. Peter the saving of Noah and his family are seen as prefiguring Baptism. Just as the waters of the Flood wiped away sin, so too do the waters of Baptism. There can be no doubt of the prominence of the Noah story during Michelangelo’s time. Savonarola, his favorite preacher, had given perhaps his most famous series of sermons on Noah and the Flood right before the French invasion of Italy in 1494. A couple of years after the completion of the Doni Tondo Michelangelo featured the Noah story on the ceiling of the Sistine chapel.

Nevertheless, I have some questions about Hayum’s hypothesis. In the first place, where is Noah in the Doni Tondo? For Hayum this question was not a problem because she saw Noah in the figure of St. Joseph.

As in the sacrifice of Noah, the Holy Family alludes to Noah and his sibylline daughter-in-law. They have come to rest holding up the future male child. Like the ritual of sacrifice, the thanksgiving and the gift are one, and a sense of celebration prevails.[iii]

Noah’s daughter-in-law was reputed to be a sibyl and given the sibyls in the Sistine chapel, it was easy for Hayum and others to recognize a sibyl in Mary’s posture. Nevertheless, I believe it would be impossible to find another reference to Joseph as Noah. If anything, Noah is a type of Christ, not of St. Joseph. Noah’s salvation of mankind from destruction at the time of the Flood prefigured the salvation effected by Christ on the Cross.

My second question relates to the postures of the nude figures in the Doni Tondo. Rather than participating in the scene of their father’s drunkenness, they lounge about like modern Italian men on a street corner ogling passing young women. A similar posture can be seen in an earlier devotional tondo by Luca Signorelli that is usually called the Medici Madonna. Hayum and others have seen a connection between the five nudes in Michelangelo’s tondo and the four practically nude young men in Signorelli’s painting.

In the foreground of Signorelli’s painting the Madonna sits on the ground while her son appears to be taking his first step. St. Joseph and John the Baptist are absent but a bust of the Baptist as a man appears in the fictive frame above the tondo with a banner reading “Ecce Agnius Dei”. However, the four young men in Signorelli’s tondo also appear to be idlers. It is hard to see how they could be the sons of Noah either before or after the incident of his drunkenness.

I would like to suggest that the nudes in both paintings are related to the story of Noah but that they are not his sons. In the Book of Genesis there is a brief reference to giants upon the earth. Here is an English translation of the Vulgate Latin.

Now giants (gigantes) were upon the earth in those days. For after the sons of God went in to the daughters of men, and they brought forth children, these are the mighty men of old, men of renown. [Genesis 6:4]

The Golden Legend embellished the biblical account of the time of Noah.

This time men began to multiply upon the earth, and the children of God, that is to say of Seth, as religious, saw the daughters of men, that is to say of Cain, and were overcome by concupiscence and took them to their wives. This time was so much sin on earth in the sin of lechery, which was misused against nature, wherefore God was displeased…

A fuller account can be found in the apocryphal legends of the Jews.

Unlike Istehar, the pious maiden, Naamah, the lovely sister of Tubal-cain, led the angels astray with her beauty, and from her union with Shamdon sprang the devil Asmodeus. She was as shameless as all the other descendants of Cain, and as prone to bestial indulgences. Cainite women and Cainite men alike were in the habit of walking abroad naked, and they gave themselves up to every conceivable manner of lewd practices. Of such were the women whose beauty and sensual charms tempted the angels from the path of virtue. The angels, on the other hand, no sooner had they rebelled against God and descended to earth than they lost their transcendental qualities, and were invested with sublunary bodies, so that a union with the daughters of men became possible. The offspring of these alliances between the angels and the Cainite women were the giants, known for their strength and their sinfulness…[iv]

The legends of the Jews ascribed a number of names to these giants but one was Nephilim, “because bringing the world to its fall, they themselves fell.” The modern Jerusalem bible does use the word Nephilim instead of giants to describe these troublemakers whose sins were so great that it took a flood to wipe them out. In addition to walking about naked, the Nephilim were noted for their arrogance and wantonness.

They knew neither toil nor care, and as a consequence of their extraordinary prosperity they grew insolent. In their arrogance they rose up against God…. It was their care-free life that gave them space and leisure for their infamies.[v]

The description of the Nephilim in the Jewish legends fits the depiction of the nude young men in the background of both Signorelli’s Medici Madonna and Michelangelo’s Doni Tondo. The painter of the ceiling of the Sistine chapel certainly had knowledge of the Book of Genesis. Scholars have demonstrated that he could have read the text in Italian because of the publication of the Malerbi bible in 1490 in the vernacular. He obviously used the Malerbi woodcuts in his work in the Sistine chapel.

Could he have been familiar with the folklore and legends of the Jews? Michelangelo grew up in a Florence that was a center of Hebraic studies.  Michelangelo trained at the Medici court where Pico della Mirandola was known for his knowledge of the Hebrew lore and traditions that were all lumped together under the heading of Cabala.  Most of Savonarola’s sermons were based on the books of the Old Testament. Also, Sante Pagnini, who succeeded Savonarola as Prior of San Marco, was a Dominican specialist in Hebrew language and grammar. He spent practically his entire career    translating the Hebrew Scriptures into Latin.

Why would Michelangelo place the proud giants or Nephilim in the Doni tondo? I can only offer the following guess. The painting is a devotional image. The Madonna elevates her infant Son in the way a priest elevates the Host at Mass. John the Baptist looks at the Host and utters the words of the Agnus Dei: Behold the Lamb of God…. But the full version of the ancient prayer is “Behold the Lamb of God, who takes away the sins of the world, have mercy on us.”