Note: I have had a change of mind on this post. Comments from friends led me to look more closely at the painting and go back and re-read some papers on the subject. I have posted the first part of my revision on May 31 on this site. It's focus is on the Holy Family in the foreground. The second part of the revision concerns the role of the young John the Baptist in the mid-ground. The third part of the revision offers a possible interpretation of the five nudes in the background. It was posted on July 21, 2015. I leave this initial post here as testimony to my own mis-step.

Note 2: Since wring the above note I have put the whole paper on the Doni Tondo on my website, MyGiorgione. Use this link.

Is the Madonna in Michelangelo’s famed Doni Tondo handing her infant son to St. Joseph, or is St. Joseph handing the child to her? This question is one of many that arise from a look at this painting that is one of the greatest masterpieces of the High Renaissance. It dates to the first decade of the fifteenth century somewhere between Michelangelo’s completion of the David in 1504 and his departure from Florence to Rome in 1506. 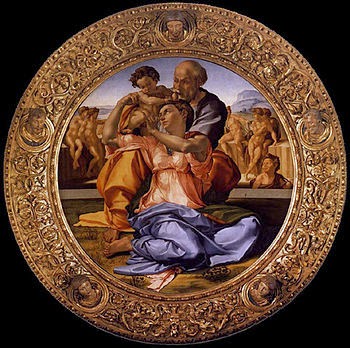 What is your opinion? Here's a closer look. 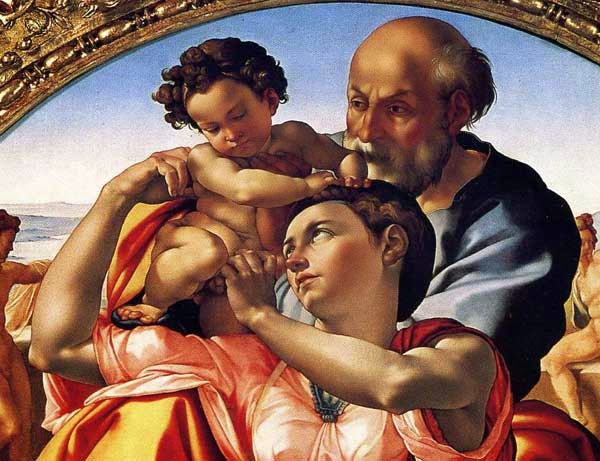 In his Lives of the Painters… Giorgio Vasari said that even a quick glance at the painting indicated that Michelangelo depicted the Madonna handing the Infant Jesus to St. Joseph.

There came to Angelo Doni, a Florentine citizen and a friend of Michelagnolo. who much delighted to have beautiful things both by ancient and by modern craftsmen, a desire to possess some work by Michelagnolo; wherefore that master began for him a round picture containing a Madonna, who, kneeling on both knees, has an Infant in her arms and presents Him to Joseph, who receives him. Here Michelagnolo expresses in the turn of the head of the Mother of Christ and in the gaze of her eyes, which she keeps fixed on the supreme beauty of her Son, her marvelous contentment and her lovingness in sharing it with that saintly old man, who receives Him with equal affection, tenderness, and reverence, as may be seen very readily in his countenance, without considering it too long. Nor was this enough for Michelagnolo, who, the better to show how great was his art, made in the background of his work a number of nudes, some leaning, some standing, and some seated; and with such diligence and finish he executed this work, that without a doubt, of his pictures on panel, which indeed are but few, it is held to be the most finished and the most beautiful work that there is to be found. *

Vasari was often mistaken or ill informed but he was a close friend and confidant of Michelangelo. It would be almost the height of temerity to reject his eyewitness description of the central feature in this painting.

An analysis of the real subject of the painting will show that Vasari’s eyes did not deceive him. In the Doni Tondo Michelangelo placed the Holy Family outside in a landscape. He used the traditional setting of one of the most popular subjects of the day, the encounter of the Holy Family with the infant John the Baptist on the return from their sojourn in Egypt. Obviously, the infant John the Baptist had also been saved from the murderous designs of King Herod. While the Holy Family had fled to the safety of Egypt, popular legends recounted the escape of the Baptist and his mother Elizabeth by taking refuge in a desert cave or grotto.

Scripture does not record how long the Holy Family remained in Egypt but the legends claimed that when they finally did return to Judea, they encountered the young John the Baptist in the desert. The significance of the meeting was not lost on theologians, ordinary folk, and the artists who found a ready market for paintings of the meeting of the two infants.

The meeting in the desert was regarded as a precursor to the meeting at the Jordan some thirty years later that marked the beginning of the public life of Jesus. At the Baptism of Jesus, John had proclaimed, “behold the lamb of God”, a prophecy of the ultimate sacrifice of Jesus on the Cross. When artists portrayed the two infants meeting and sometimes embracing in the desert, they were depicting the acceptance by Jesus of his sacrificial mission. Sometimes the scene includes an actual lamb, or even a lamb in the place of John the Baptist.

Leonardo’s so-called “Madonna of the Rocks” is a good example of the encounter with the young John the Baptist. Leonardo placed the meeting in the cave or grotto in which the Baptist and his mother took refuge. The version now in London even shows the Baptist showing a little cross to the infant Jesus. Leonardo’s equally famous depiction of Mary, her mother Anne, and the two young boys is also a version of the encounter in the desert. Leonardo substituted a lamb for the Baptist in the final version.

Speaking of Baptism, I like the theory that the five nude figures in the background of the Doni Tondo also refer to Baptism. It has been argued that the three sons of Noah are shown on our right but that the third, who looked upon his father's nakedness, is omitted on the left. In the First Letter of St. Peter it is stated that the saving of Noah and his family from the Flood prefigured Baptism.

A New Covenant was established after the Flood. Jesus claimed that John the Baptist was the last and greatest of its prophets. Accordingly, the young Baptist is behind the parapet that separates the Old from the New and gazes at the Christ Child being raised up by his Mother as if she were a priest elevating the Host at the Consecration of the Mass. 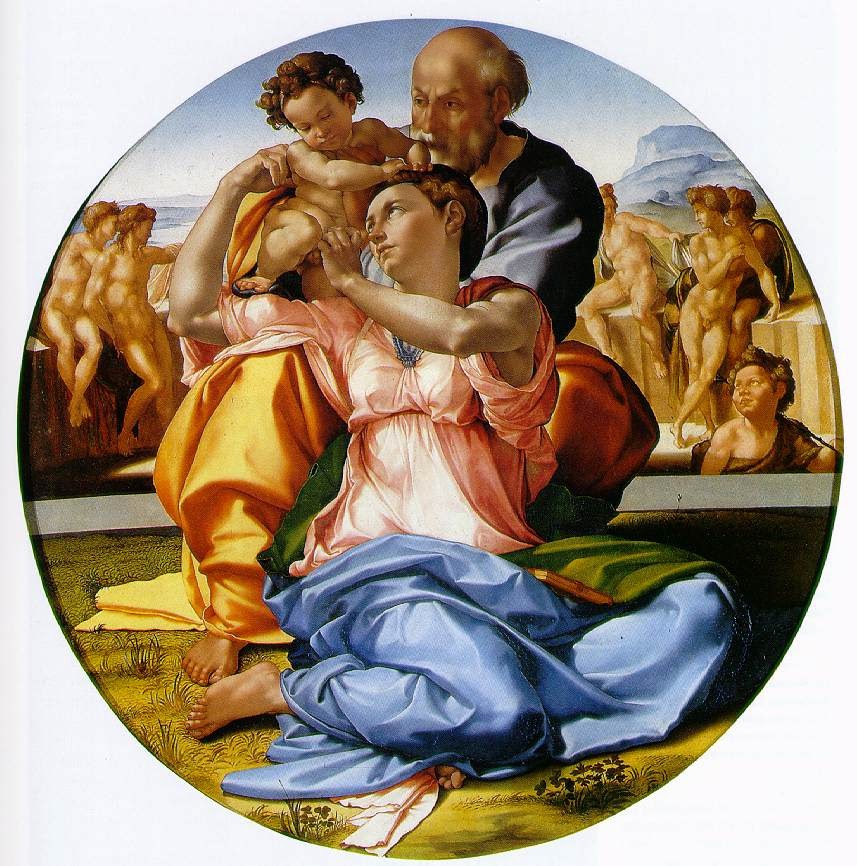 Not only does Mary elevate the Child, but also she hands Him to St. Joseph. In the preceding century theologians had elevated the humble carpenter to the role of patron and protector of the Church. Indeed, the descendant of King David is often depicted wearing gold, the color of royalty. In the Doni Tondo I believe that Michelangelo went even further. Joseph is now a symbol of the Church or people of God. At the outset of his mission on Earth, Mary delivers the Child to the Church that is commissioned to carry on His mission.

There can be multiple levels of meaning in a Renaissance painting. It is also possible that the Doni Tondo includes the hope that Agnolo Doni’s wife would present him with a male son and heir.