In their 1999 Giorgione catalog Terisio Pignatti and Filippo Pedrocco made a valiant attempt to not only attribute and interpret the paintings of Giorgione, but also to present them in a rough chronological order.*

The dust jacket of the catalog noted that Teriseo Pignatti made his career at the Civic Museum of Venice since 1945, and that he became director of the Museum in 1974. Filippo Pedrocco had overseen the Museum of Settecento Veneziano in Ca’ Rezzonico since 1983. It would be hard to imagine two more distinguished Italian scholars.

In the next few months I would like to present the works of Giorgione in the order in which Pignatti and Pedrocco presented them knowing that there will always be disagreement on matters of attribution, interpretation, and dating when it comes to Giorgione.

In today’s posting I list the first four entries in the catalog. These four small similar panel paintings all seem to have been made for a small box.

We support the argument that the Padua panels—and the others that make up this series—were originally part of a decorative scheme for a piece of furniture or a jewel box.(p. 92)

I use the titles preferred by the authors. 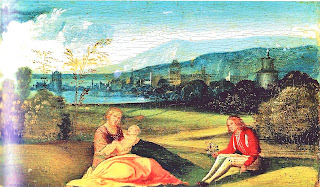 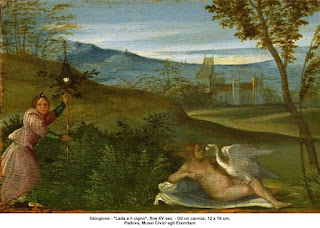 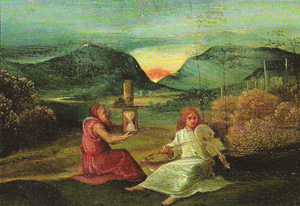 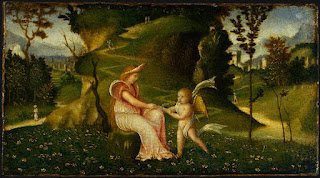 The authors agree with those who believe that these panels are the earliest known works of Giorgione.

Number 1 depicts three figures in a landscape. Since I interpreted Giorgione’s Tempest as his version of the “Rest of the Holy Family on the Flight into Egypt,” I suspected that the “Rustic Idyll” might have been an early attempt at that subject. However, recent attempts to attribute the “Malmesbury” version of the “Judgment of Paris” to either Giorgione or Raphael have made me wonder if the man in the Rustic Idyll might also be Paris since the attire of both is so similar. In that case the “Rustic Idyll” would represent the story of Paris, the nymph Oenone, and their young child. 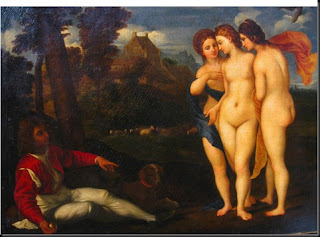 Number 2 is the only one of the four with an obvious subject. However, in her study of Venetian humanism Margaret King has shown that even the rape of Leda by Jove in the guise of a swan could have a Christian meaning. No one has ever been able to identify the woman holding up a strange mirror.

Number 3 depicts two figures in a landscape. The authors believe that the Astrologer title is not pertinent and believe that an hypothesis suggesting Orpheus and Father time is “more credible.”

Number 4. The authors note that this panel might have been the front of the box since x-rays reveal a keyhole in the center. Most accept the identification of Venus and Cupid but I wonder if the long red hair of the woman could make her the penitent Mary Magdalen in the wilderness being ministered to by an angel. ###


Edit: In his 2007 catalog Wolfgang Eller argued that none of the four panels exhibited enough quality to be by Giorgione and that they were most likely done around 1520 or 1525. He felt that the quality was so poor that they couldn't even be attributed to Giulio Campagnola.**

However, In his 2009 study of Giorgione done in connection with the exhibition in Padua celebrating the 500th anniversary of the death of Giorgione, Enrico Maria dal Pozzolo attributed #1 and #2 (coincidentally now in Padua) to Giorgione but believed that #3 and #4 were by an associate working with Giorgione. He supports an early dating.***

“in reaching out to the immaterial through the material man may have fleeting visions of God.” Emile Male.

Emile Male was a pioneering Nineteenth century French historian who almost single-handedly rediscovered the magnificent art of the French cathedrals of the Twelfth, Thirteenth, and Fourteenth centuries. I have only been able to interpret Giorgione’s "Tempest" and Titian’s "Sacred and Profane Love" because I sat on the shoulders of this giant.

I first read “The Gothic Image”,  the English paperback version of Male’s study of the Thirteenth century cathedrals while teaching Western Civilization at a small college in Connecticut over 40 years ago. Even after I left academe to pursue a career in the world of finance, I continued to read Male and eventually went through his complete three volume set, “Religious Art in France,” re-published by Princeton from 1984 to 1986.*

Male was a pioneer not only because he was one of the first to see the real  subjects of the Gothic windows and sculptures after years of “Enlightenment” obscurantism, but also because  he employed the tools of modern historiography. It almost seems that he actually visited every church and chapel in France as well as a host of others on the European continent. He also found the long forgotten texts that provided the key to the understanding of the windows, paintings, and sculptures that filled the sacred spaces.

It may seem commonplace now but for Male the art of the Middle Ages was primarily didactic. Its purpose was to teach and instruct.  Although it often achieved great beauty, art was not to give visual pleasure.

Through the medium of art the highest conceptions of the theologians and scholars penetrated to some extent the minds of even the humblest of people.

Every branch of human knowledge found its way into the cathedrals which resembled great ships carrying the faithful to their final destination. All that was needed to be known could be found on board. Male identified six major areas of knowledge.

Iconoclastic revolutionaries attacked and destroyed the statues and windows of the cathedrals because they believed that they were representations of the history of the French monarchy. Male showed that they were mistaken because the medieval theologians and artists were more interested in “sacred” history. History could be divided into six major subject areas.

In dealing with such important subjects the artists followed the dictates of the scholars and theologians.

the artistic representation of sacred subjects was a science governed by fixed laws which could not be broken at the dictates of individual imagination.

Even in the Renaissance when great artists like Giorgione and Titian were stretching the envelope, they still were true to traditional iconography. When I was searching for an explanation of the two broken columns in Giorgione’s Tempest, I had only to turn to Male’s description of the apocryphal legends surrounding the flight into Egypt. 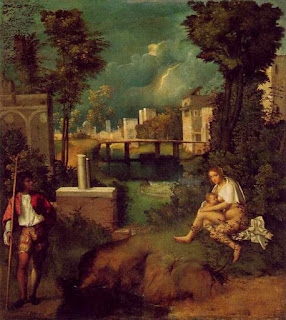 Many medieval writers told that when Jesus entered the temple of Sotinen, called Hermopolis by others, he caused the idols to fall, in fulfillment of Isaiah’s words: “Behold the Lord will ascend upon a swift cloud and will enter into Egypt. And the idols of Egypt shall be moved at  his presence”…When the governor of the town, Affodosius, heard of the miracle, he went to the temple; when he saw that all the statues were broken, he worshiped Jesus….

The Church adopted the story of the Fall of the Idols, which like many apocryphal legends, grew out of a desire to justify a prophetic text, and it authorized the artists to represent it….The thirteenth century gave an abridged, almost hieroglyphic form to the legend. There are neither town, temple nor priests…two statues falling from their pedestals and breaking in two suffice to recall the miracle. **

More than an encyclopedic reference, Male was a true guide for anyone seeking to understand Medieval and Renaissance art. He showed how symbols could be decoded to identify once familiar subjects. The nimbus or halo was a sign of holiness within and was only used to identify Christ, the Madonna, the Apostles, and the saints. Christ is always shown with his unique “cruciform” halo. God the Father, Jesus, and the Apostles are always bare foot, but not the Madonna and the saints. Divine intervention is usually indicated by a hand emerging from above or from clouds. Cherubs indicate the eternal rest of Heaven.

Well-known Apostles have their identifying characteristics. St. Peter usually has curly hair and a short stubby beard. St. Paul is bald with a long straight beard since he belonged to the Jewish sect that did not cut their hair. He is often shown with the sword used in his own execution.

Even events must follow the rules. At the Last Supper Jesus and the Apostles are usually ranged opposite Judas who is bereft of halo. At the Crucifixion the Madonna must stand at the right hand of Jesus and St. John at the left. The right hand always indicates the place of honor. At the Annunciation artists could vary the postures and attitudes of the angel and the Virgin, but there must always be a flower between them.

Male explained why the altar must always be oriented toward the East, the direction of the rising sun. Only after the Reformation would the Jesuits discard this ancient practice. The cold, dark North side of the cathedrals would always depict scenes from the Old Testament while the warm and bright South would be used for the New Testament. The West was the direction of the setting sun and therefore used to depict the end of the world and Last Judgment as seen in the great West Rose window of Chartres.

Numerical symbolism was extremely important. The number 3 represented the Trinity and all spiritual things. Four represented all material things, since matter was made up of the four elements of air, earth, fire, and water. Seven was a particularly important number for it represented humanity, the unique sum of spirit and matter. There were the seven ages of man, the seven virtues with their corresponding vices, the seven sacraments, and even the seven planets that played a mysterious role in governing human destiny. The number 12, the product of 3 and 4, represented completeness. It was the number of the Apostles, the tribes of Israel, and of the universal Church.

Consider this little Rose window from the back of my own parish church in Connecticut which was modeled on the Norman Gothic style of the Twelfth century. The risen Lamb of God from the Book of Revelation reclines on an altar with the Seven Seals. Around this center the twelve petals of the rose each contain a symbol of one of the  Apostles who represent all the elect. This same circular window representing Paradise can be found in all the great French cathedrals, as well as in Dante’s Paradiso.

For Medieval artists and craftsmen the choice of subject was extremely important. To paraphrase Male, every form clothed a thought, and thought fashioned the matter and assumed plastic form.
Sadly, most modern scholars seem to have only a token knowledge of his work. I suppose it is regarded as out-dated and old fashioned but, in my opinion, it is impossible to fully understand the art of the Italian Renaissance without poring through his volumes. For Male the Middle Ages ended not with the Renaissance but only in 1517 with the onset of the Protestant Reformation. ###