I do not know how Margaret L. King’s, Venetian Humanism in an Age of Patrician Dominance was received when it first appeared in 1986, but it was a real eye opener for me more than 25 years later. I originally looked into it for the profiles in the last section of her study of all the ninety-two humanists that she found in Venice in the fifteenth century.*

*All quotes are from Margaret L. King, "Venetian Humanism in an Age of Patrician Dominance," Princeton, 1986. Page numbers in parentheses. This review article was originally published at Giorgione et al... on 1/12/2013.
Posted by Dr. F at 6:30 AM No comments: 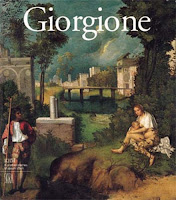 The exhibition produced a beautiful and valuable catalog with essays and catalog entries by most of the world’s leading Giorgione scholars. In addition, the catalog included two appendices on the scientific or technological examination of some of Giorgione’s works that contained some valuable information that so far has been little noticed.*
The first study, “Giorgione’s Materials and Painting Technique: Scientific Investigation of Three Paintings,” was a joint effort by Elisa Campani, Antonella Casoli, Enrico Fiorin, and Stefano Volpin. The authors examined the newly restored “Castelfranco Altarpiece”, the “Tempest”, and the portrait of an old woman usually called “La Vecchia”. Acknowledging Giorgione’s fame as an innovator, the authors declared that:
The goal of this diagnostic campaign was to determine the extent to which Giorgione’s inventiveness manifested itself in a desire to experiment with new materials and techniques. 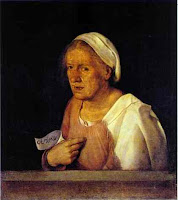 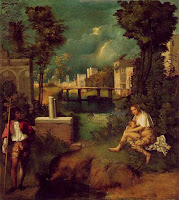 Those interested in the very full discussion of the variety of scientific techniques used will have to read the article. In brief, I would just like to highlight some of their results and conclusions. The authors believed that their investigation enabled a “complete reconstruction of Giorgione’s palette in the three masterpieces.” Moreover,
The choice of materials seems to depend on the result which the artist wished to achieve in each work, adapted to his expressive requirements and the evolution of his style. (256)
This conclusion only seems to confirm what everyone has thought of Giorgione and other Venetian painters but it is good to have it confirmed scientifically. Not only does his palette vary significantly but so too does his choice of binding medium. One of the results of the technical examination highlighted,
a significant difference in the painting technique of the three examined works; the choice of egg tempera to apply colour in the Castelfranco altarpiece and of a mixed technique, using walnut oil mixed with egg for La Tempesta and La Vecchia. (260)
The authors draw the following conclusion that so far does not appear to have penetrated the Giorgione world.
Even given the limited number of works investigated, the artist emerges as a figure with a great knowledge of materials and techniques rather than as an innovator and experimenter. One could say that the artistic revolution caused by Giorgione does not necessarily translate into strictly technological innovation. In fact, from this point of view, the analyses have not highlighted any novel resolutions in the three works. Instead there is clear evidence of an ability to utilize the extensive materials available in Venice and of a sound knowledge of the painting techniques accumulated by Venetian workshops during the 15th century.
Sandra Rossi and Paolo Spezziani collaborated on the second technical essay, “Examination via X-Ray and Infrared Reflectography, and Restoration of the Castelfranco Altarpiece.” Although mainly a discussion of the altarpiece, the authors did report on a  2001 infrared reflectography examination of both the “Tempest” and “La Vecchia” in preparation for the 2004 exhibition. This examinination confirmed a pentimento in the "Tempest" that the catalog still regarded as inexplicable:
investigation enabled a more precise characterization of the figure on the bridge, who wears a long garment and is seen proceeding to the right. The figure holds a staff in his left hand; on his right shoulder is a second stick, from which hangs a container.
Although this figure cannot be seen even in the infrared image provided in the text, Dr. Rossi confirmed the existence of the man on the bridge to me as we both stood in front of the painting in the Accademia in 2010. A man with a staff and a pilgrim’s sack flung over his shoulder fits no other interpretation of the painting than “The Rest on the Flight into Egypt.” As so many other painters did, both before and after, Giorgione originally must have intended to portray the actual flight in the background with the “Rest” in the foreground. Why he changed his mind, we will never know. ###