Although originally given to Raphael, scholars for over a century have agreed that Judith with the Head of Holofernes is an early work by Giorgione. According to recent catalogs, it was a ground-breaking work.
In her 1996 catalog Jaynie Anderson credited Giorgione with the introduction of “the Jewish heroine of the Apocrypha to Venetian painting….” * Three years later Terisio Pignatti wrote that Giorgione’s Judith introduced “numerous innovations that make the painting fascinating, particularly in the field of iconography..." **  In a 2007 catalog Wolfgang Eller claimed that Giorgione’s figure of Judith “is the first really feminine and the first graceful figure in Venetian art.” ***
Characteristically, Giorgione avoided the use of stock or standard iconographical elements. Eller noted that Giorgione’s Judith contains “no optical indication of the events. There is no female servant, no tent, no besieged city, and no waiting figures in the background that illustrate the story.”
All commentators seem to agree that the most striking element in the painting is the bare leg of Judith. According to Pignatti, "Giorgione inserts a completely new motif in the garments which reveal the left leg of the woman." For explanation, scholars fall back on "eroticism" and "sensuality." Eller regards the bare leg as highly erotic.
the raised leg makes an extensive laying bare of the female thigh possible for the painter. In Giorgione’s time, this was considered highly erotic, for a woman to show only her calves was even more daring than a bare bosom. Thus from the aspect of the observer of those times, the depicted figure is identifiable as being erotic. (48)
It would appear, however, that in depicting the “bare thigh” Giorgione was just paying close attention to the biblical account in the Latin Vulgate, the only Bible in use at the time. Chapter 9 of the Book of Judith gives the famous prayer of the Jewish heroine as she prepares for her encounter with the enemy tyrant. Here is verse 2 taken from the Jerusalem Bible.

Lord, God of my father Simeon,
You armed him with a sword to take vengeance on the foreigners
who had undone a virgin's girdle to her shame,
laid bare her thigh to her confusion,
violated her womb to her dishonor...
Judith is referring to the story of the rape of Dinah, the daughter of Jacob and the sister of Simeon, from the Book of Genesis, 34: 1-3.

Dinah, who was Jacob’s daughter by Leah, went out to visit the women of that region. Shechem, the son of Hamor the Hivite, who was ruler of that region, saw her, carried her off and raped her, and so dishonoured her.

This incident led to the slaughter of the Hivite men after they had been tricked into undergoing circumcision.
Apparently, Giorgione used an exposed thigh to indicate a woman in danger of sexual assault. In an early work that we only have in a seventeenth century copy by David Teniers, Giorgione used the same motif. He exposed the thigh of another woman in danger of sexual assault.
Although the painting is usually called the “Discovery of Paris,” it is actually a depiction of the apocryphal legend of the encounter of the Holy Family with robbers on the flight into Egypt. The young Giorgione had the audacity to depict the bare leg of the Madonna who, according to the legend, escaped dishonor when one of the robbers persuaded the other to let the Holy Family proceed on their journey in peace. #
Giorgione also paid close attention to another element in the biblical account. Chapter 10 of the Book of Judith gives a detailed account of Judith putting on her finery.
There she removed the sackcloth she was wearing and, taking off her widow’s dress, she washed all over, anointed herself with costly perfumes, dressed her hair, wrapped a turban around it and put on the dress she used to wear on joyful occasions when her husband Manasseh was alive. She put sandals on her feet, put on her necklaces, bracelets, rings, earrings, and all her jewelry, and made herself beautiful enough to catch the eye of every man who saw her.
Judith’s deed is usually seen as an heroic attempt to deliver not just herself but her people from danger. Yet during the Renaissance she was often seen as a prototype of Mary. Perhaps it was this aspect that influenced Giorgione or his patron. Judith’s prayer (9:11) sounds very similar to Mary’s famous Magnificat.
Your strength does not lie in numbers,
Nor your might in violent men;
Since you are the God of the humble,
The help of the oppressed,
The support of the weak,
The refuge of the forsaken,
The savior of the despairing.
The Book of Judith is still included in Catholic bibles today, but it was rejected by Protestants. Nevertheless, the story remained popular after the Reformation and paintings of the subject by Artemesia Gentileschi and Caravaggio are famous although far more graphic than Giorgione’s version.
###
Note 1: This post originally appeared on Giorgione et al... on 4/17/2011. Later, on 11/16/2014, I discussed a depiction of Judith on the Fondaco dei Tedeschi, a Giorgione/Titian collaboration. In that fresco the identity of the helmeted soldier can also be found in the Book of Judith.

Note 2: J.C. comments. Thank you for sharing your latest Giorgione post. It might be useful to include a reference to Donatello's bronze David. The exposed thigh and how Judith holds the sword and stands on the head of Holofernes is similar to Donatello' s David's pose.  A new female hero with the attendant weaker physical force overcoming a greater physical force. 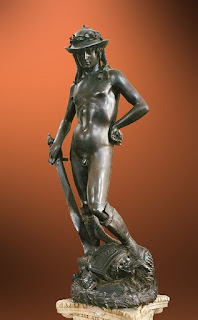 * Anderson, Jaynie: Giorgione, 1997.p. 292. According to Anderson the “Judith” was originally a door panel since there is evidence of a painted over keyhole.
** Pignatti, Terisio and Pedrocco, Filippo: Giorgione, Rizzoli, NY, p. 52.
*** Eller, Wolfgang: Giorgione Catalog Raisonne, Petersberg, 2007, p. 47.
# My analysis of this painting that is usually called "The Discovery of Paris" can be found at my website, MyGiorgione.
Posted by Dr. F at 6:34 AM 2 comments: