I just heard that Hasan Niyazi, my friend and fellow Art history blogger, died suddenly over the weekend.  Hasan was from Australia and in the past three years, his blog, Three Pipe Problem (3PP), had become one of the most popular Art history blogs in the world. He was the son of Turkish Cypriots who had migrated to Australia when Hasan was a young boy. Like Raphael, his favorite painter, Hasan died tragically in the prime of life. 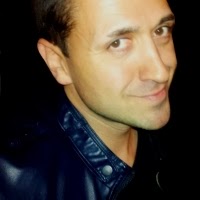 His passion was the art of the Italian Renaissance. He claimed that his interest in Art began at the age of nine when he found a copy of a book by famed art historian Erwin Panofsky. I wonder if it began on the island of Cyprus under the eyes of the goddess Aphrodite, the beloved deity of the island.

I first encountered Hasan when I commented on a blog post he had written for 3PP in July of 2010 on Giorgione’s “Tempest.” We had a spirited back and forth that showed that Hasan was willing to engage in debate but that he was also open to new ideas if they could be backed up with hard evidence. Even though he loved the art of the Renaissance, he had trained and worked in the sciences and believed that Art history should be subject to the same rules that governed the sciences.

Our first encounter led to many more. He helped me immeasurably not only with his research into favorite painters like Raphael but also with the technical aspects of blogging. He was a wizard of design and had a great flair for using images in his work. He willingly shared his knowledge with me, a web newcomer.

Eventually, he allowed me to publish some of my discoveries and reviews on his site. His site was growing by leaps and bounds and he gave me the opportunity to reach a much larger audience. It was not easy because he was a stern taskmaster and editor. We had many arguments and disagreements but I believe we both gained by the exchanges. When I sent him my interpretation of Titian’s  “Sacred and Profane Love,” he chided me for not discussing all the previous interpretations, and eventually decided to do that on his own. It was a great example of web-based cooperation.

Speaking of the Web, Hasan ended his last post with these words.

The future of art history and the internet is a very exciting prospect. This goes beyond the fact that more art historians and institutions are engaging online, but also expands to include an increased public participation and interest in learning about art and history outside of an institutional and pedagogical content. The web allows quality knowledge, and fascinating images and video to be accessible everywhere, and by everyone--hence the potential for art history online is essentially limitless.

As a small token I would like to dedicate my most recent discovery to the memory of Hasan. One of his favorite paintings was Titian’s “Pastoral Concert.” Earlier this year I sent him an advance copy before I posted it on my own website and blog. He read it and very kindly spread the word among his friends and followers. I interpreted the painting as Titian’s homage to his friend Giorgione on his sudden and tragic death at the age of 33. 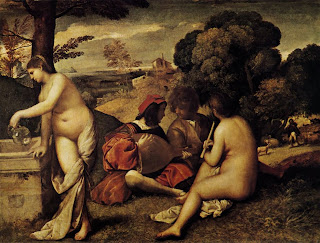 We never met and he lived on the other side of the world in a place he called, Oz. But he was a dear friend and colleague.