Giorgione: Adoration of the Shepherds


Scholars have expended more time dealing with the controversy that has surrounded the attribution to Giorgione of the so-called “Allendale Adoration of the Shepherds” than they have in trying to understand what is actually going on in the painting. Here I would like to deal with the subject and meaning of this famous Nativity scene that is now in Washington’s National Gallery.

The subject of the painting seems so obvious. It is a depiction of the adoration of the shepherds who have left their flocks to seek out the newborn Savior after hearing the angels’ announcement. Here is the biblical text from Luke's gospel.

Now when the angels had gone from them into heaven, the shepherds said to one another, “let us go to Bethlehem and see this thing that has happened which the Lord has made know to us...” So they hurried away and found Mary and Joseph, and the baby lying in a manger. #

The relatively small size of the painting indicates that it was done not as an altarpiece but for private devotion. Although the subject is clear, there is a deeper meaning. Why is the infant Jesus lying on the rocky ground and not in a manger or feeding trough? Why is he naked? Where are the swaddling clothes?*

Actually the newborn infant is lying on a white cloth that just happens to be on the ends of Mary’s elaborate blue robe that the artist has taken great pains to spread over the rocky ground. Giorgione is here using a theme employed earlier by Giovanni Bellini and later by Titian in their famous Frari altarpieces. The naked Christ is the Eucharist that lies on the stone altar at every Mass. The altar is covered with a white cloth that in Rona Goffen’s words “recalls the winding cloth, ritualized as the corporale, the cloth spread on the altar to receive the Host of the Mass.” In Franciscan spirituality Mary is regarded as the altar.

Clearly, the viewer-worshipper is meant to identify the Madonna with the altar and the Child with the Eucharist. Bellini's visual assertion of this symbolic equivalence is explained by a common Marian epithet. The Madonna is the "Altar of Heaven." the Ara Coeli, that contains the eucharistic body of Christ” Ave verum Corpus, natum de Maria Virgine.**

The “Adoration of the Shepherds” represents the first Mass. This was not an unusual concept. Many years ago I attended a talk on the famous Portinari altarpiece that now hangs in the Uffizi. The speaker was Fr. Maurice McNamee, a Jesuit scholar, who argued that Hugo van der Goes had also illustrated a Mass in that Netherlandish altarpiece around the year 1475. His argument centered on the spectacular garments of the kneeling angels that he identified as altar servers wearing vestments of the time. He called them “vested angels,” and they are the subject of his 1998 study, “Vested Angels, Eucharistic Allusions in Early Netherlandish Painting.”

His Eucharistic interpretation explained the naked infant on the hard, rocky ground. The infant Christ is the same as the sacrificial Christ on the Cross and on the altar at every Mass. In a study of Mary in Botticelli’s art Alessandra Galizzi Kroegel referred to this connection.

it needs to be pointed out first of all that the Renaissance era saw the spread of practices of individual devotion to be carried out primarily in the home… From the theological perspective attention should then be drawn to the emergence of a new trend that… tended to identify the mystery of the Incarnation with the Redemption itself, focusing on the Passion with much less fervour than in the past: whence the growing popularity of  ‘incarnational’ iconographies celebrating the word made flesh, such as pictures of the Infant Jesus in his mother’s arms…while the demand for images with Christ on the Cross, very common in the fourteenth century was drastically reduced.***

It would appear that Giorgione has used the same motif although his angels have become little putti who hover around the scene. The shepherds represent participants in the Mass who kneel in adoration.

There are many other iconographical details in this painting that could be discussed. Joseph’s gold robe indicates royal descent from the House of David. The ox and ass in the cave are symbols of the old order that has been renewed with the coming of Christ. So too would be the tree trunk next to the flourishing laurel bush in the left foreground. The laurel is a traditional symbol of joy, triumph, and resurrection.

Giorgione has moved the main characters off to the right away from their traditional place in the center. Rather than diminishing their importance this narrative device serves to make all the action flow from left to right and culminate in the Holy Family.  Giovanni Bellini had done the same thing in his St. Francis in the Desert, and later Titian would use this device in his Pesaro altarpiece in the Frari.

Finally, art historian Mario Lucco has suggested that the long hair of the one indicates a Venetian patrician in shepherd’s clothing.* That may be so but I like to think Giorgione indicated that the Savior, whether present on the ground before the shepherds as a newborn King, or on the altar at Mass, is accessible to all. This King is not protected by armed guards. There is no need to bribe or otherwise court influence with bureaucrats acting as intermediaries. Anyone, even the simplest and the humblest, can approach this King directly and in his or her own fashion.

#Luke’s account of the angelic appearance to the shepherds is the traditional gospel at the midnight Mass on Christmas . The actual arrival of the shepherds at the stable in Bethlehem is the passage used for the gospel reading for the Christmas Mass at dawn.

Email ThisBlogThis!Share to TwitterShare to FacebookShare to Pinterest
Labels: Adoration of the Shepherds, allendale Adoration, Giorgione

The Immaculate Conception in Renaissance Art 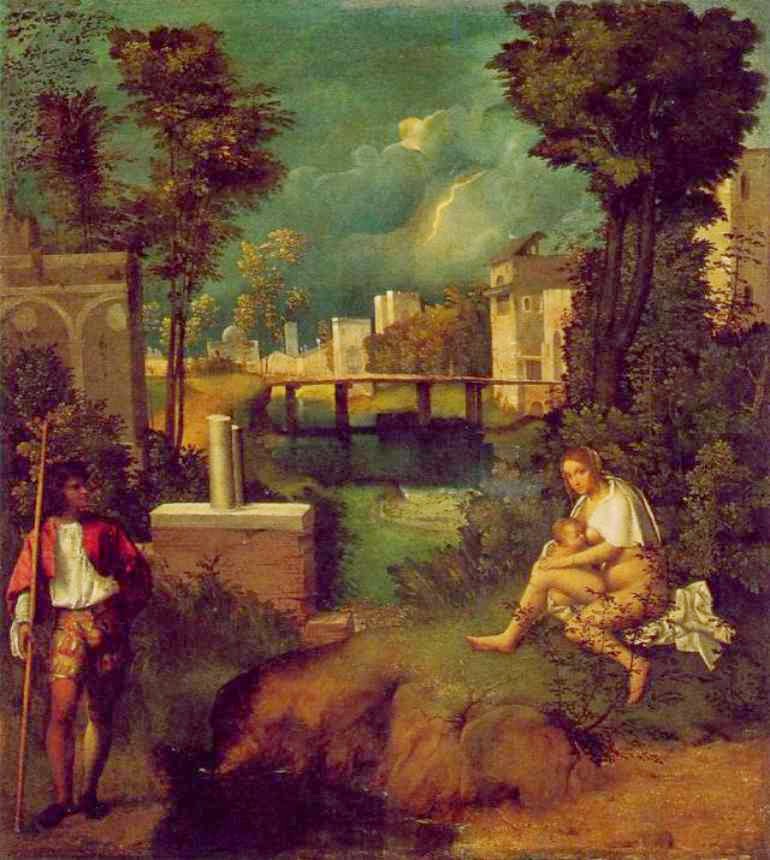 The explanation lies in the Catholic doctrine of the Immaculate Conception, a doctrine of which every Venetian would have been aware. Simply put, the doctrine affirms that Mary had been created free from the stain of original sin inherited by every other descendant of Adam and Eve. Indeed, Mary was regarded as the "new" or "second" Eve.

Significant developments in the fifteenth century had brought the idea of the Immaculate Conception to prominence by the end of the century. In the first place, the century witnessed a continued increase in devotion to the Madonna, which naturally led to an increased interest in the "Conception." This interest was fostered by religious orders, most notably the Franciscans. Secondly, controversy about the doctrine between the Franciscans and the Dominicans, the two great teaching orders, contributed to its development.[i]

In 1438 the Council of Basel, no doubt responding to the upsurge of devotion to Mary, affirmed the doctrine of the Immaculate Conception, but only after Papal legates and others had left the Council. Without Papal support the Council and its decrees could not become binding on the Church. Nevertheless, the concept of the Immaculate Conception had been given tremendous impetus. Nowhere did it receive greater support than in Venice.

Two great figures played a key role in the spiritual life of Venice in the 15th century. Goffen noted the importance of the sermons of St. Bernardino of Siena, who was made a patron saint of Venice in 1470; and of Lorenzo Giustiniani, the saintly first patriarch of the Republic.

In these and other similar passages, Bernardino and Giustiniani declared their belief in the Immaculacy of the Madonna. Their influence on Venetian piety must have been as pervasive during the Renaissance as it is difficult today to gauge in any precise way. Nonetheless, their thoughts and writings constitute part--a very important part--of the original context of sacred art in Renaissance Venice. One must attempt to reconstruct that context in the historically informed imagination.[iii]

After his death in 1453, Giustiniani’s sermons circulated widely and were finally published in Venice in 1506.

The Papacy also played a role. Francesco della Rovere, the scholarly Vicar-General of the Franciscan order, was elected Pope Sixtus IV in 1471. In the previous year he had written a treatise on the Immaculate Conception in which he had tried to reconcile the differing opinions of supporters and opponents. Subsequently, he added its Feast to the liturgy for the entire Western Church, and ordered new offices to be composed. One was even composed especially for Franciscan use.

Art followed doctrine although the doctrine was a difficult subject to render. After all, it dealt not with Mary's birth but with her conception. Early attempts in the fifteenth century had crudely attempted to portray an infant Mary in the womb of her own mother, Anne. By the end of the century this image, which bordered on heresy, was being replaced by a combination of three symbolic images taken from different scriptural sources.

First, there was the image of the woman crushing the serpent beneath her heel from Genesis 3:15. The Latin Vulgate gave this passage as, "inimicitias ponam inter te et mulierem et semen tuum et semen illius ipsa conteret caput tuum et tu insidiaberis calcaneo eius." "I will put enmity between thee and the woman, and thy seed and her seed; she shall crush thy head, and thou shalt lie in wait for her heel." This image first began to appear in the early fifteenth century.[iv]

Secondly, there was the image of the spouse from the Song of Songs 4:7, "Thou art all fair my love, and there is no stain in thee." In this image, the "tota pulchra es," Mary is not a Madonna holding her infant Son, but a beautiful woman standing alone and surrounded by images from the Old Testament that symbolize her purity and role. Rona Goffen noted the prevalence of this image in the devotional literature of the time especially in the “offices for the feast of the Immaculate Conception by Nogarolis and by Bernardino de Bustis.”[v]

Finally, the image of the woman from the Book of Revelation "clothed with the sun" with "stars in her crown" and standing on the crescent moon (that would become the standard after the Reformation) began to appear. These images were rarely used alone but most often in combination. In the Grimani Breviary, named for the Venetian cardinal and art collector who was a contemporary of Giorgione's, there is a miniature of the Woman of the Apocalypse and the "tota pulchra es."[vi] Interestingly, on the facing page in the Breviary there is an image of the “Rest on the Flight into Egypt.”

Advocates of the Immaculate Conception regarded Mary as a new Eve, whose status was the same as Eve's before the Fall. Giorgione had the audacity to portray a "nude Madonna" as Eve would have appeared before the Fall.
###
Addendum:  In the "Tempest" the Madonna's heel is shown over a dead section of a plant that looks like belladonna, a plant associated with witchcraft and the devil. Despite the storm in the background of the painting, the woman is clothed only in bright sunlight. Finally, no one has ever doubted her beauty. She is "all fair." ### 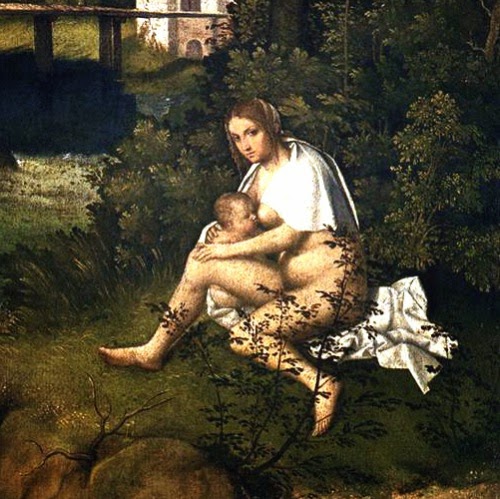