In his monumental 2009 study of Giorgione, Enrico Maria dal Pozzolo began his discussion of the individual paintings with a work that is not usually given to the master from Castelfranco.* 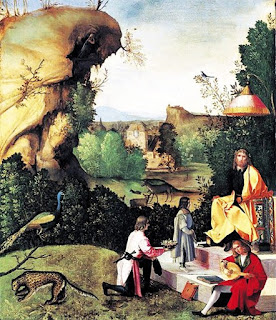 In a clearing, a figure with a melancholy air, who is dressed in dark cloth save his showy yellow cloak, sits on a throne covered with an oriental rug, surrounded by books varying in size and sealed with metal clasps. Standing before him is a young boy wearing a heavy grey garment with a fur collar; he is staring straight ahead as if he were waiting for something. Behind him a servant kneels as he holds out a bowl full of flowers and leaves; he has taken off his hat as a sign of respect…On the first step of the throne a lute player, wearing tights and a pleated shirt, hints at a chord while staring in the direction of the viewer. (120) **

Pozzolo believed that this medium-sized panel (59x 48 cm), now at the National Gallery in London, “might be the first of Zorzi’s works to have been handed down to us." He called it a “bizarre” painting and pointed out the difficulties surrounding it.


The use of the conditional concerns every single aspect of it—the attribution, the date, the subject—because it is a work unlike any other from that time…”
It was purchased by the National Gallery in London in 1885: from that moment on its attribution has bounced back and forth between the master…and his workshop or circle…Similarly, much uncertainty has always surrounded its dating (ranging from the early 1490s to around 1550) , and the subject it is supposed to represent. (120)

He noted that some have believed the main figure is David or Solomon, while others have argued for Jason or Zeus, or even an indistinct “Poet.” Then, Pozzolo himself went out on a limb and made an astounding assertion.


But the main figure is none other than Saturn, the god who devoured his own children, was castrated and denounced by Zeus, represented here in decline and exile in a hortus conclusus inside which human beings and animals live together in peace, all within the bounds of a “virtuous “laurel shrub….

Enrico dal Pozzolo is one of the world’s foremost Giorgione authorities and I have no problem agreeing with him that this work could be an early Giorgione. His interpretation, however, leaves much to be desired. He himself admits that even on those rare occasions when painters depicted Saturn, he was never shown as in this painting.

It seems much more likely to me that this painting is a version of the “Man of Sorrows” in a landscape filled with iconographical elements that Venetian artists like Giorgione loved to employ.

He has the same sorrowful visage of the “Man of Sorrows,” and looks out at the viewer in the same way that so many others do. He wears a royal golden robe and sits on a throne placed upon what could easily be the steps of an altar.

Instead of waiting to be devoured, the young men are in postures of humility and adoration. I cannot identify all the iconographical elements in the painting but the peacock is usually a sign of incorruptibility or immortality, and the leopard a sign of sin. In the Giorgionesque rocky outcrop someone appears to be kneeling in contemplation.

A few years ago, my wife and I visited MOBIA, the now defunct Museum of Biblical Art in New York City, to view an exhibition entitled, “Passion in Venice, Crivelli to Tintoretto and Veronese." The title of the exhibition was a little misleading since it was given over almost entirely to images of the suffering Christ or "Man of Sorrows." a popular subject in the fifteenth and sixteenth centuries.


Its origins rooted in Byzantium, the figure entered Venetian art in the late Middle Ages after which it flourished locally for centuries, eventually acquiring its own name in dialect, Cristo Passo... 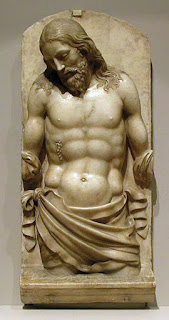 The first thing to note about the subject was its ubiquity. “Cristo Passo” was obviously popular in Venice but the exhibition had works from all over Europe. Moreover, the image appeared in all different types of media, “Illuminated manuscripts, paintings, prints, sculpture, and liturgical objects." There was even a striking polychrome paper mache relief based on a Donatello pictured here. 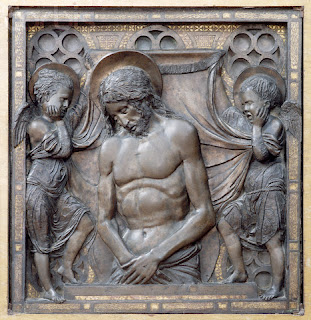 The next thing that struck me was that all the images, despite their obvious differences, were basically the same. It was as if all these artists, the great and the not so great, all used the same model, especially when it came to the head of Christ. Even without his cruciform halo, he is easily recognized. He is a man who has suffered, who has been beaten and humiliated, and whose head slumps to one side, usually his right. His beard is short and pointed albeit ragged. Artists could not depart far from this model. 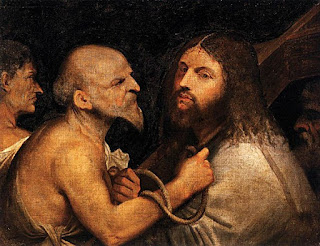 In addition to the "Saturn Exiled" that Dr. Dal Pozzolo placed at the very beginning of Giorgione's career, the famous “Christ Carrying the Cross”  could also be a depiction of the "Man of Sorrows." Vasari claimed that this painting had miraculous healing powers from the time it was first unveiled in the Scuola di San Rocco. Vasari originally claimed that Giorgione did the painting, but in his second edition he gave it to Titian. Since that time scholars have not been able to resolve the question of attribution.

Whether by Giorgione or Titian, the face of Christ that looks out at the viewer, certainly seems derived from the standard image of the “Man of Sorrows.”

What was the reason for the popularity of the image of the “Man of Sorrows?” It was obviously based on the Gospel of Matthew. In chapter 8 after recording a number of the miracles of Jesus, Matthew echoed the words of Isaiah:“He took away our infirmities and bore our diseases.”

Matthew drew from the famous account in Isaiah 53 of the suffering servant:


A thing despised and rejected by men, a man of sorrows and familiar with suffering… And yet ours were the sufferings he bore, Ours the sufferings he carried… Yet he was pierced through for our faults, Crushed for our sins. On him lies a punishment that brings us peace, And through his wounds we were healed.

The MOBIA exhibition demonstrated that every Venetian would have immediately recognized the figure in the painting in the National Gallery.

*Enrico Maria dal Pozzolo, Giorgione, Milan, 2009. Giorgione catalogs by Anderson (1997), and Eller (2007) do not agree with dal Pozzolo's attribution. They accept the title "Homage to a Poet", but without much discussion.

**Edit. 11/2/2013. Please notice the baldachino above the head of the Man in Giorgione's painting. It looks somewhat like an ornate lampshade. In an exchange with David Orme, an English friend and lover of Venice, he told me that he had seen similar fixtures still existing in Venice. Below is an image supplied by his friend, Albert Hickson. 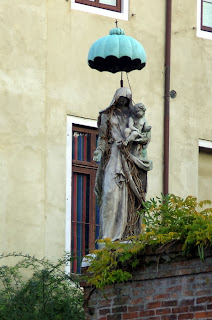 It covers a Madonna and Child on the Rio Ognisanti near San Trovaso. Many thanks, David and Albert.
Posted by Dr. F at 7:33 AM No comments:

Lord, God of my father Simeon,
You armed him with a sword to take vengeance on the foreigners
who had undone a virgin's girdle to her shame,
laid bare her thigh to her confusion,
violated her womb to her dishonor...
Judith is referring to the story of the rape of Dinah, the daughter of Jacob and the sister of Simeon, from the Book of Genesis, 34: 1-3.

Dinah, who was Jacob’s daughter by Leah, went out to visit the women of that region. Shechem, the son of Hamor the Hivite, who was ruler of that region, saw her, carried her off and raped her, and so dishonoured her.

This incident led to the slaughter of the Hivite men after they had been tricked into undergoing circumcision.
It would appear that Giorgione used an exposed thigh to indicate a woman in danger of sexual assault. In an early work by Giorgione that we only have in a seventeenth century copy by David Teniers, Giorgione used the same motif. He exposed the thigh of another woman in danger of sexual assault. Although the painting is usually called the “Discovery of Paris,” it is actually a depiction of the apocryphal legend of the encounter of the Holy Family with robbers on the flight into Egypt. The young Giorgione had the audacity to depict the bare leg of the Madonna who, according to the legend, escaped dishonor when one of the robbers persuaded the other to let the Holy Family proceed on their journey in peace.
Giorgione also paid close attention to another element in the biblical account. Chapter 10 of the Book of Judith gives a detailed account of Judith putting on her finery.
There she removed the sackcloth she was wearing and, taking off her widow’s dress, she washed all over, anointed herself with costly perfumes, dressed her hair, wrapped a turban around it and put on the dress she used to wear on joyful occasions when her husband Manasseh was alive. She put sandals on her feet, put on her necklaces, bracelets, rings, earrings, and all her jewelry, and made herself beautiful enough to catch the eye of every man who saw her.
Judith’s deed is usually seen as an heroic attempt to deliver not just herself but her people from danger. Yet during the Renaissance she was often seen as a prototype of Mary. Perhaps it was this aspect that influenced Giorgione or his patron. Judith’s prayer (9:11) sounds very similar to Mary’s famous Magnificat.
Your strength does not lie in numbers,
Nor your might in violent men;
Since you are the God of the humble,
The help of the oppressed,
The support of the weak,
The refuge of the forsaken,
The savior of the despairing.
The Book of Judith is still included in Catholic bibles today, but it was rejected by Protestants. Nevertheless, the story remained popular after the Reformation and paintings of the subject by Artemesia Gentileschi and Caravaggio are famous although far more graphic than Giorgione’s version.
###

* This post originally appeared on Giorgione et al... on 4/17/2011. Later, on 11/16/2014, I discussed a depiction of Judith on the Fondaco dei Tedeschi, a Giorgione/Titian collaboration. In that fresco the identity of the helmeted soldier can also be found in the Book of Judith. Here is a link.

** Anderson, Jaynie: Giorgione, 1997.p. 292. According to Anderson the “Judith” was originally a door panel since there is evidence of a painted over keyhole.
*** Pignatti, Terisio and Pedrocco, Filippo: Giorgione, Rizzoli, NY, p. 52.
# Eller, Wolfgang: Giorgione Catalog Raisonne, Petersberg, 2007, p. 47.