Despite obvious differences there are similarities between “St. Francis in the Desert,” painted by the young Giovanni Bellini around 1475, and the “Tempest” painted by Giorgione over 30 years later. 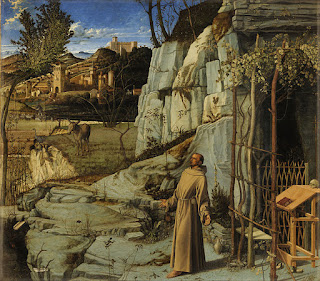 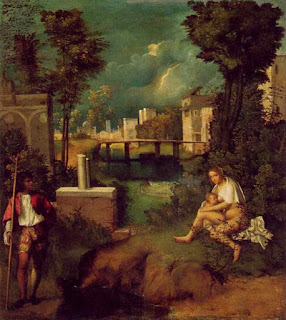 In both paintings there is a city in the background. In the “Tempest” the main characters have turned their backs on it, and in the “St. Francis,” the main figure is oblivious to its existence. In both cases there is a prominent iconographical element in the mid-ground. In the Bellini it is the donkey or Onager, the wild ass of the desert; in the Giorgione, it is the broken columns.

In the left foreground of the “Tempest” the young man acts as an interlocutor whose over the shoulder gaze at the woman and child draws the viewers attention to her. In the “St. Francis” the strangely bent laurel tree directs attention to St. Francis. Finally, in the foreground both painters have moved the main character away from the center and placed them on the right to emphasize that the whole narrative ends with them.

My wife and I took advantage of a lovely spring day to take the commuter line from Fairfield to New York City to view the recently restored “St. Francis in the Desert” at the famous Frick Museum on 5th Avenue and 70th Street right across from beautiful Central park.

The painting has long been a personal favorite of mine. I remember seeing it at the Frick more than 50 years ago when I first visited the Museum as a young college student. At that time I had little interest in Art, sacred or otherwise, but the building, Henry Clay Frick’s former home, and its great collection struck me with awe. Even then Bellini’s painting had pride of place in the magnificent living room where it was hung between two Titian portraits. Years later I discovered that this painting besides being one of Mr. Frick’s favorites was also the most popular with the general public.

Recently the Frick decided to collaborate with the conservation department of the nearby Metropolitan Museum of Art in order to clean the painting, and subject it to extensive scientific investigation. After the cleaning the painting was returned to the Frick and placed in an exhibition gallery right off the central courtyard or garden where it will stay throughout the summer.
Online computers allowed visitors to access the results of the investigation, that can also be found on the Frick’s own website. The most striking result was the revelation of the incredibly detailed underdrawing used by Bellini. The detail is almost Van Eyckian. Especially impressive is the drawing of the Saint’s head.

Moreover, what the investigation failed to find might be of even more significance. Some have long argued that the painting depicts St. Francis in the act of receiving the Stigmata (wounds of Christ) on his body during a retreat on the mountain of LaVerna. One of the objections to this interpretation has been that the traditional signs of the stigmata episode, such as Christ or an angel in the sky, are missing. Some were apparently hoping that the new investigation would reveal that the heavenly figures had been cut or trimmed out of the painting. However, the results were negative. The painting on display in the Frick is what Bellini painted.

I must confess that I was struck by the failure of the Museum and its online analysis to pay much attention to John Fleming’s 1982 study of the painting, “From Bonaventura to Bellini.” Fleming argued that every detail in the painting is there by design, and that Bellini was following an iconographical scheme based on a profound understanding of Franciscan spirituality.
I have discussed Fleming’s interpretation in a guest post at 3 Pipe Problem. Here is an excerpt. [The painting can be explored in detail on the Frick website or on the google Art project] 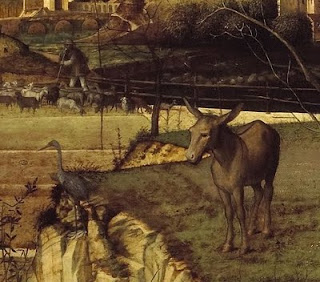 The landscape in the painting is not La Verna, the site of the stigmata episode, but the desert of the Old Testament or Hebrew scriptures. In particular, it is the Egyptian desert. The prominent animal in mid-ground is the Onager or wild ass of the desert while the heron standing before it is a bird of the Nile delta.

Franciscans often associated their founder with Moses and Elias and their life in the desert. In the background beneath the city there is a shepherd tending his flock just as Moses did before his encounter with the Lord. Indeed, the leaning tree so prominent in the upper left is the famous burning bush in which the Lord appeared to Moses. It is a laurel which at the time was believed to be impervious to fire.

We also notice that Francis has removed his sandals and stands barefoot in the same manner as Moses. The wooden structure behind Francis is a Sukkoth, variously translated as tent, hut, booth, or tabernacle, a kind of portable structure used by the Israelites in their wanderings in the desert. The Sukkoth also recalls the scene of the Transfiguration when Christ was revealed in His glory accompanied by Moses and Elias to the three apostles, Peter, James, and John. Dumfounded, Peter offered to build three booths or Sukkoth for the Lord and his guests.

If we look closely, we will see beneath the right hand of Francis a rabbit in a hole in the rock, and beneath his left hand a jug. The rabbit was a symbolic reference to Moses who hid his face from the Lord and the jug is a reference to Elias. Indeed, the abundant vegetation sprouting around Francis is a garden or carmel, another reference to Elias who was supposed to have been the founder of the Carmelite order. Francis stands between Moses and Elias in the same way as Christ stood between them at the Transfiguration. In Franciscan spirituality and imagery, Francis was the new Christ.

Fleming’s book was written almost 30 years ago. How long does it take for a new theory based solidly on textual evidence to gain acceptance in scholarly circles?