Giorgione, Vasari, and a Judith Fresco. In his “Lives of the Artists” Giorgio Vasari placed his brief biography of Giorgione right after Leonardo da Vinci’s and ranked the young Venetian master, who died tragically in 1510 at about the age of 34, with the great Florentine master. Even though Vasari visited Venice on at least two occasions, it is hard to determine what Giorgione works he saw with his own two eyes.  But there can be no doubt that he saw Giorgione’s frescoes on the exterior walls of the Fondaco dei Tedeschi, the center of the German merchant community situated on the Grand Canal near the Rialto bridge.

The Fondaco dei Tedeschi had burned to the ground in 1504, and the Venetian government hastened to rebuild the structure so important to its trade with the North. The new building was finished by 1507, and the young Giorgione was given the commission to decorate the exterior walls. The commission was a sign of Giorgione’s elevated artistic status, and its completion only added to his fame. The Venetian weather eventually did havoc on the Fondaco frescoes but the spectacular figures and colors were still evident when Vasari saw them a little more than three decades after Giorgione’s death.

Although extremely impressed, Vasari confessed that he could not understand the subject or the meaning of much of the work. He concluded that in the Fondaco frescoes, Giorgione

thought only of demonstrating his techniques as a painter by representing various figures according to his own fancy. Indeed, there are no scenes to be found there with any order or representing the deeds of any distinguished person, of either the ancient or the modern world. And I for my part have never been able to understand his figures nor, for all my asking, have I ever found anyone who does. In these frescoes one sees, in various attitudes, a man in one place, a woman standing in another, one figure accompanied by the head of a lion, another by an angel in the guise of a cupid; and heaven knows what it all means. *[274-5]

However, Vasari did identify one figure as the biblical heroine Judith. **

Over the door which leads to the storerooms for the wares, a seated figure of a woman is depicted. She has the head of a dead giant at her feet, as is the custom in representations of Judith; and this head she is raising with a sword, while speaking, at the same time, to a figure in the German habit, who is standing, still further beneath her. What or whom this figure may be intended to represent, I have never been able to determine, unless, indeed, it be meant for a figure of Germany. [275] 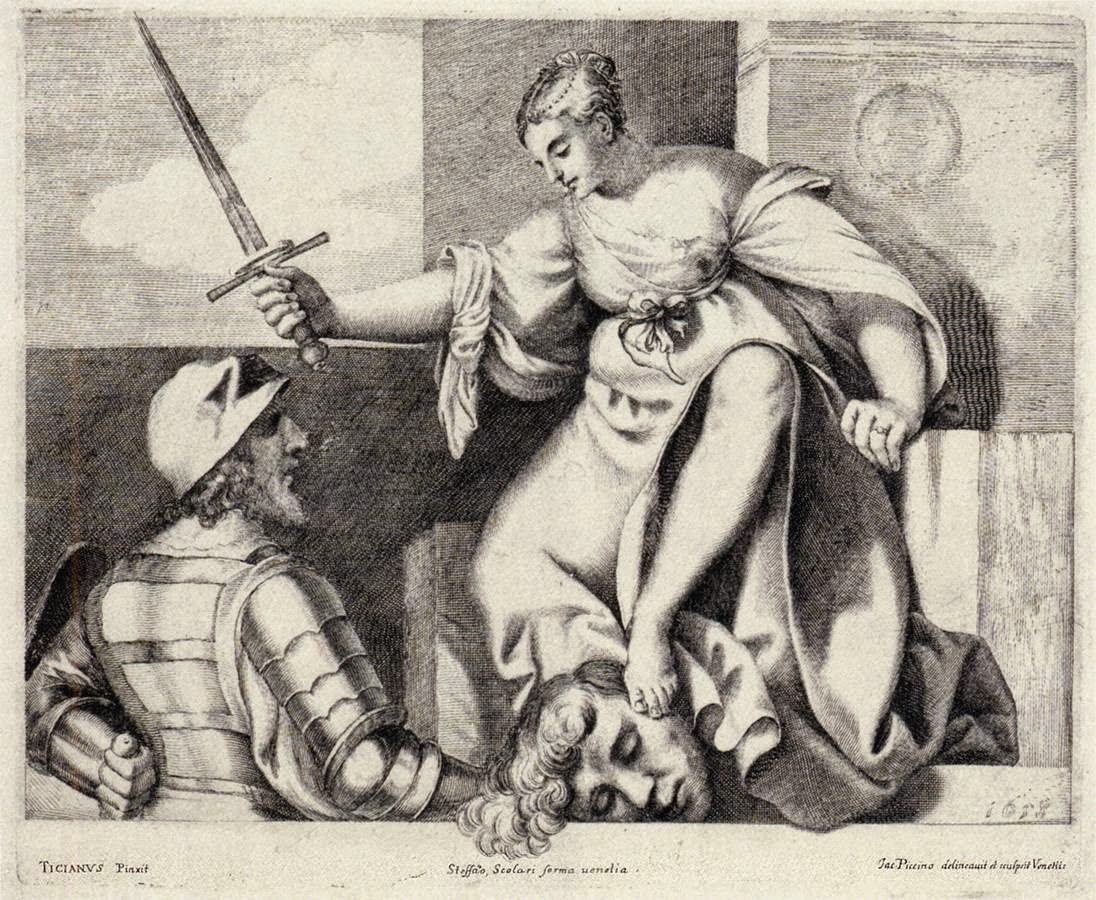 Fortunately, we have a print copy of the Judith fresco from a seventeenth century engraving. It shows Judith dressed in the finery described in the biblical account, with her bare leg resting on the head of Holophernes. *** At the bottom left is a half-length figure of an armored warrior who looks up at Judith. Given that the Fondaco was the German center, I suppose it was natural for Vasari to claim that the man in the scene represented Germany. Interestingly, like many art historians since his time, when Vasari has difficulty identifying a figure he gives it an allegorical interpretation.

I believe that the identity of the man in the Judith fresco can be discovered by taking a closer look at the Book of Judith. Whether in Vasari’s time or ours, churchgoers tend to be aware only of the highlights of biblical stories. But even a quick reading of the relatively short Book of Judith shows that a foreign warrior played a key role in the narrative. It is Achior, the leader of a contingent of Ammonite mercenaries serving in the army of Holophernes.

At the outset of the story Holophernes had asked his various lieutenants for information about the Israelites who dared to oppose his army from their mountain fortress of Bethulia. Achior came forward and recounted the history of the Israelites and the many times that their God had delivered them from adversity. He concluded that unless the Israelites had offended their God, it would do no good to attack them. Holophernes was shocked by this impudent prophecy, and had Achior left bound hand and foot near the Israelite walls to fulfill a prophecy of his own.

As for you, Achior, you Ammonite mercenary, who in a rash moment said these words, you shall not see my face again until the day when I have taken my revenge on this brood of fugitives from Egypt….you will not die, until you share their ruin. ****

The Israelites took Achior into their stronghold and treated him well after they heard his account of what had transpired with Holophernes.

The rest of the story was well known during the Renaissance. Although the book of Judith came to be rejected by Protestant scholars, it was very popular in the early Christian church, and its popularity continued right into the Baroque era in Catholic circles. During the Renaissance Judith was often paired with David for both were examples of God using the weak to triumph over the strong. Judith also came to be seen as a prototype of Mary.

However, the little known Achior made one more appearance at the end of the narrative. After Judith brought the head of Holophernes to the Israelite camp, she asked that Achior view the enemy general’s head in a kind of ironic twist to Holophernes’ own prophecy.

“call me Achior the Ammonite for him to see the man who thought so meanly of the House of Israel and recognize this as the man who sent him to us as a man already doomed to die.”…No sooner had he arrived and seen the head of Holophernes held by a member of the people’s assembly than he fell down on his face in a faint. They lifted him up. He then threw himself at the feet of Judith, and prostrate before her exclaimed:

May you be blessed in all the temples of Judah
And in every nation;
At the sound of your name
Men will be seized with dread….

Subsequently, Achior professed his belief in the God of the Israelites, was circumcised and converted.

Vasari was mistaken in his identification of the warrior on the Judith fresco but there still could be a bit of allegory involved in its placement on the Fondaco dei Tedeschi.  I suspect that the placement of this scene on the Fondaco wall was a sign of the relationship between Venice and the German community in Venice. It is not hard to imagine that Venice was represented there by Judith, and the German community by the foreign Warrior looking up at her.

*Giorgio Vasari, Lives of the Artists, Volume I, a selection translated by George Bull, Penguin Books, 1968. All selections from Vasari are from these editions. Page numbers are in brackets.

**Vasari attributed this fresco to Giorgione but its location on the Merceria side of the Fondaco would indicate that it was done by Titian. However, I do believe that Giorgione was responsible for the whole iconographic scheme including the cartoons of all the work. In any case, this essay is about Vasari's eyewitness view and interpretation.

*** Judith’s bare leg has been discussed in an earlier post on this site.

**** All biblical quotations are from the Jerusalem Bible.