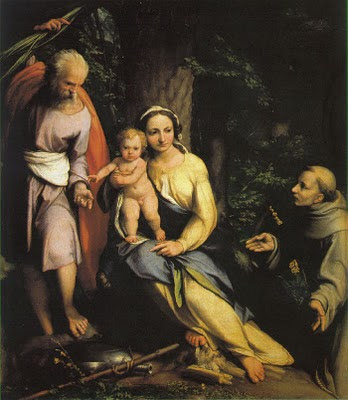 Correggio: Rest on the Flight into Egypt with St. Francis.

My interpretation of the Tempest as the “Rest on the Flight into Egypt” explained the “nudity” of the Woman as Giorgione’s way of depicting Mary’s Immaculate Conception. Was there something going on at the time that would conflate the iconography of the “Rest” with that of the “Immaculate Conception”?

In discussing the famed Grimani Breviary last week I wondered if it was more than a coincidence that the last two images in that extraordinary collection of images should be “The Rest on the Flight into Egypt,” and the “Immaculate Conception.”

The editor of the Levenger press modern facsimile edition noted in his introduction the Franciscan influence in the whole collection. Is there any other evidence that the Rest and the Immaculate Conception were somehow linked in Franciscan spirituality?

In 1975 Sheila Schwartz’s doctoral dissertation, “The Iconography of the Rest on the Flight into Egypt,” was the first and maybe the only full study of the subject. It was a brilliant, exhaustive study, done at NYU under the guidance of Colin Eisler. Unfortunately, it was never published and Dr. Schwartz subsequently went on to other things.

Nevertheless, she was also struck by the incongruity of the “Rest” iconography and the “Immaculate Conception” Of a work by Correggio, she wrote,

“With Correggio’s “Rest on the Flight with St. Francis…of ca. 1516-18, painted for the Church of San Francisco at Correggio, we have the first documented altarpiece with the “Rest” as its subject.” p. 140.

But she was puzzled by its placement in a chapel dedicated to the Immaculate Conception.

“ why should Munari (or anyone else) have commissioned an altarpiece of the “Rest on the Flight” for a Chapel dedicated to the Immaculate Conception? There was never a theological association made between the two themes and the traditional relationship between chapel dedication and altarpiece is not easily ignored. It seems most likely that Correggio’s “Rest” was painted for another part of San Francesco and only later moved to the Cappella della Concezione, perhaps during the sixteenth-century alterations of the Church or the restoration of the Chapel in 1572.” pp. 142-143.

Almost 20 years later David Ekserdjian referred to Schwartz’s discussion of the Munari chapel and tried to offer another solution.

Ekserdjian did not precisely date this painting but gave it to Correggio’s “early period.” Schwartz put it between 1516 and 1518. Correggio, Cardinal Grimani, and Giorgione were contemporaries. Again, at this time was there something in Franciscan spirituality that linked the iconography of the “Rest on the Flight into Egypt” with the “Immaculate Conception”?

Perhaps someday a student will discover a text that provides such a link. For now, I would like to hazard a guess.

The twelfth chapter of the Book of Revelation (Apocalypse) begins with “a great sign” that appeared in heaven. It was the image of “a woman, adorned with the sun, standing on the moon, and with the twelve stars on her head for a crown.” The woman was pregnant and gave birth to a son “who was to rule all the nations.” Both mother and child were threatened by the “dragon” but the son “was taken straight up to God and to his throne, ‘while the woman escaped into the desert, where God had made a place of safety ready…”

As David Ekserdjian noted the iconography of the “Immaculate Conception” was far from fixed at the time of Giorgione but the image of the “woman, clothed with the sun” was becoming identified with Mary and beginning to be used in depictions of her “Immaculate Conception.” The Grimani Breviary contained such an image. 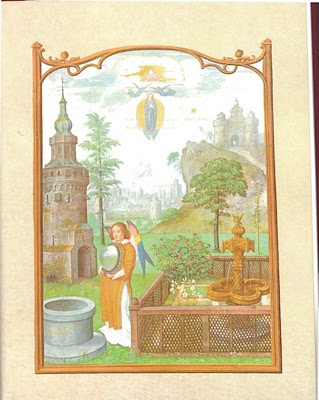 In the Book of Revelation the Woman flees into the desert where she is pursued and threatened by the dragon who has been cast down to earth. We are told “she was given a huge pair of eagle’s wings to fly away from the serpent into the desert, to the place where she was to be looked after for a year and twice a year and half a year.”

Despite some obvious discrepancies, there is enough imagery in the Book of Revelation to provide a source for linking the “Immaculate Conception” with the flight of the Holy Family into the Egyptian desert.

Here is another depiction by Correggio of the "Rest on the Flight into Egypt," sometimes called the "Madonna della Scodella" from the little dish she holds in her hand. 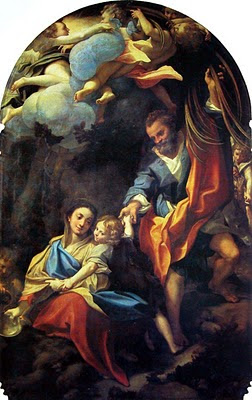