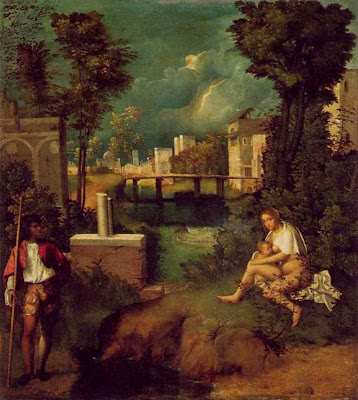 Rainer Metzger’s essay, “Everyday Life and Allegory, An Attempt to Understand Giorgione’s Tempesta” was one of four separate and contradictory attempts to interpret the Tempest in the 2004 Giorgione exhibition catalog, “Giorgione, Myth and Enigma.” *For Metzger the key to understanding the painting can be found in the young man who stands off to the side looking back at the nursing Woman.

“the gentiluomo has come from the background, from the town, a bridge has helped him abandon his urban life. On the far bank of the stream an ambience loaded with sentiment awaits him, dominated by ruins apparently left behind by antiquity and by now overgrown by nature….But it seems that the gentleman in his elegant breeches and the very latest fashion in codpieces has found a way to fight his way through to the promised land in the foreground. In this he has been supported by a shepherd’s crook, which is clearly only a prop and not an attribute, indicating not the beau’s profession but rather his obsession”….(114)

The young man has no relationship with the Woman—she is a product of his imagination, an imagination based on his reading of the pastoral literature that was becoming popular in Venice around the year 1500. He is having a vision in the same way that Chancellor Rolin imagined the Madonna and Child in Van Eyck’s famous painting.


The nursing Mother is a personification of fertile nature.

He does however attach much importance to one of the pentimenti revealed by technological examination—the nude woman dangling her feet in a stream at the lower left. Although the catalog entry argued that Giorgione never intended to place two women in the painting, Metzger believes otherwise and that the man was a later addition thereby creating a major problem with his interpretation. If the Man is the key figure in the painting, and if the painting represents his vision, why wasn’t he in the original version? 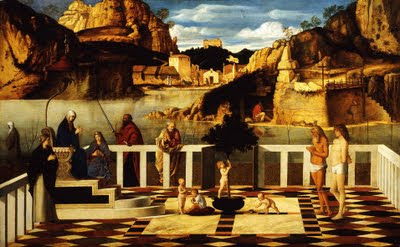 He sees the Madonna and Child in the Tempest but cannot bring himself to believe his own eyes.

*Ferino-Pagden, Sylvia, and Nepi-Scire, Giovanna: exh. Cat. Giorgione, Myth and Enigma, Vienna, 2004. This catalog was the result of the historic 2004 joint exhibition sponsored by the Accademia in Venice and the Kunsthistorisches Museum in Vienna. Historic, because for the first time the “Tempest” left Italy for the Vienna showing. The copious catalog entry did not take sides on the interpretation of the Tempest but left that to the four scholars. I have already reviewed Bernard Aikema’s essay in a previous post.
Posted by Dr. F at 6:17 AM