Kenneth Clark claimed that Giorgione invented the “classic Venetian nude.” He noted some antecedents but found in Giorgione “an appetite for physical beauty more eager and more delicate than had been bestowed on any artist since fourth-century Greece.”*


Giorgione’s discovery opened the way for others.


It is because he suddenly found the shape and color of those desires which had been floating half formed in the minds of his contemporaries that Giorgione's work has reached us inextricably confused with that of other artists. He had no sooner found the password then all could enter at the same door, and one or two may have pushed past him.

Clark did not refer to the young woman in the “Laura” with one breast exposed, or even to the nude nursing woman in the “Tempest.” He had in mind the nudes on the Fondaco dei Tedeschi and, above all, the “Sleeping Venus” now in Dresden.


In the nude we can be sure that he was the real inventor. Engravings of his vanished masterpiece, the frescoes of the Fondaco dei Tedeschi, show nude figures of women used for almost the first time as units in a decorative scheme; and a nude woman is the subject of the picture in which his peculiar graces are most clearly apparent, the Dresden Venus.

Like most of Giorgione’s paintings the “Dresden Venus” has raised questions of attribution and interpretation. In 1525 Marcantonio Michiel, a Venetian patrician, saw the painting that most scholars believe to be the “Dresden Venus” in the home of Messer Jeronimo Marcello at San Tomado.


The canvas, representing Venus, nude, sleeping in a landscape with Cupid, is by Giorgio di Castelfranco; but the landscape and the Cupid were finished by Titian.**

The editor of Michiel’s notes also claimed that Carlo Ridolfi saw the painting in Marcello’s house over a century later.


Ridolfi in 1646, saw it in Marcello’s house, and described it in his book as a work of Giorgione in the following words: ‘In Marcello’s house there is a lovely nude Venus sleeping, with Cupid at her feet holding a bird in his hand, which (cupid) was finished by Titian.’ The Venus is now alone in the landscape, for the Cupid was so badly damaged that it had to be effaced. (note 3)**

Both observers mention that the painting had been left unfinished by Giorgione and completed by Titian. They also mention the Cupid that can no longer be seen because of a later overpainting. X-rays have revealed the presence of the Cupid but it is impossible to say if it was painted by Giorgione, Titian, or someone else.

In the past, despite Michiel’s words, some have attributed the entire painting to Titian but now most agree on Giorgione. Still, there is much controversy about the extent of Titian’s contribution. While the nude is universally given to Giorgione, some claim that Titian did the landscape, and others claim that he was responsible for the fine materials on which the Venus reclines. In a recent catalog Wolfgang Eller argued that most of the painting is by Giorgione’s hand and that Titian did little more than a final touch up.***


The Venus of Georgione is sleeping, without a thought of her nakedness, in a honey-colored landscape: but her outline forbids us to identify her as Venus Naturalis. Compared to Titian's Venus of Urbino, who seems, at first, so closely to resemble her, she is like a bud, wrapped in it's sheath, each petal folded so firmly as to give us the feeling of inflexible purpose.*


The sleeping figure does not realize that she is being observed and in contrast to Titian’s later depiction, she is not consciously displaying her nudeness. Giorgione rendered the beauty of the nude female female body with noble delicacy, and there is no indication of rawness or lasciviousness.***

Clark, Eller and most scholars agree that Giorgione represented a brief moment in time. In the first decade of the 16th century Giorgione took the lead along with Michelangelo in the depiction of the nude body with no trace of shame. Titian, especially in his early work, reflected Giorgione’s greatness and influence. Writing about the nude in the “Sacred and Profane Love,” Rona Goffen noted, 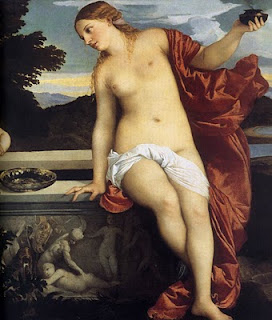 “as female nudes go, this one is modest; her sex is covered not by a coy gesture but by the unambivalent means of a white drapery. Moreover, her legs are firmly locked together,…there is nothing prurient about her presentation, and her turning away from us to glance at her counterpart underscores the nude’s purity.” ****

Not too long after after Giorgione’s death in 1510 a new element would enter into the picture and eventually bring to an end this brief moment in time. Reformation reformers, both Catholic and Protestant, would direct their efforts against lewd images, but the process took some time. At the same time, lewd images would begin to proliferate. In the 19th century Mark Twain described Titian's "Venus of Urbino" as not even fit for a bagnio. Carlo Ginzberg referred to a study of manuals for confessors that showed that images were not of primary concern in the first decades of the 16th century.

For the time of Giorgione the words of Kenneth Clark are still apt.


In European painting the Dresden Venus holds almost the same place as is held in antique sculpture by the Knidian Aphrodite. Her pose is so perfectly satisfying that for four hundred years the greatest painters of the nude…continued to compose variations on the same theme… Her pose seems so calm and inevitable that we do not at once recognize its originality. Giorgione's Venus is not antique... how un-Gothic she is in the cylindrical smoothness of every form.

Yet this isolation on the nude from the vegetable life that surrounded it could not be maintained for long: it resulted from a moment of balance as delicate as that which produced Botticelli's Primavera. And in the culmination of the Georgionesque, the Concert Champetre, the bodies have lost all sense of Gothic virginity. Far from being buds, they have the opulent maturity of an Italian summer. We have entered the realm of Venus Naturalis. 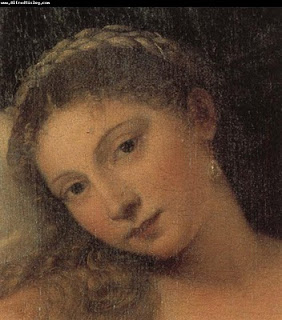 Titian: Detail of "Venus of Urbino," Uffizi, Florence. Repeated attempts to put up the full image of the "Venus of Urbino" have been blocked. Anyone interested can find the full image with a simple search. In a way, I guess it just confirms the point made above about the modesty of early nudes by Giorgione and Titian.

**The Anonimo, Notes on Pictures and Works of Art in Italy made by an Anonymous Writer in the Sixteenth Century: ed. by George C. Williamson, London, 1903, p. 105.