In a paper that I put on my website on September 9, 2011, I argued that the two woman in Titian’s famous “Sacred and Profane Love” are both Mary Magdalen but in two separate guises.The “Sacred and Profane Love” might not have been Titian’s first attempt to portray Mary Magdalen in her two guises. In 1508-9 the young Titian worked with Giorgione on the exterior frescoes of the Fondaco dei Tedeschi, the vital center of the German commercial community in Venice that had been recently rebuilt after a fire in January of 1505.

In 2001 Paul Joannides noticed the similarity of one of Titian's frescoes, now lost, to the "Sacred and Profane Love." Joannides thought it strange that a 17th century copy made by Antonio Zanetti of the Fondaco figures was related to a depiction of Judith, "This seems to mean that the two figures, one certainly, the other probably, nude were placed above the Judith, and thus above the cornice. Zanetti's wording is ambiguous since his print contains at least part of the second figure... Indeed, it may be that this passage has been confused by some misprint. If, however, the two women were placed directly above the Judith it is evident that significant figural decoration continued into the storey above her-if only in the center, of the façade-and it is probable that the figures embodied some meaning, since they would have been seen in conjunction with Judith. The nude, apparently pointing upwards, might have represented hope; the other, looking down perhaps to children, possibly Charity--but this is to reach the limits of the speculative."*

If the two women in the “Sacred and Profane Love” are seen as Mary Magdalen, there would be little need to speculate about the reason why one of the most famous woman of the Old Testament might have been placed below a famous one of the New Testament. Moreover, just like Mary Magdalen, Judith dressed herself in her most alluring garb in order to seduce her victim. 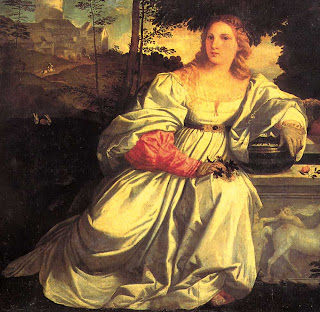 In the "Sacred and Profane Love" The fully clothed woman is Mary Magdalen depicted as a Venetian courtesan in the process of contemplating the spiritual opportunity that Jesus has presented to her. 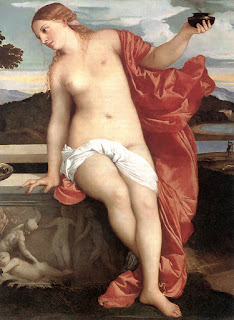 The semi-nude woman is the penitent Magdalen perhaps in the first moments of her conversion. She holds in her hand the jar of oil or ointment that is the almost universal sign of Mary Magdalen. Once the two women are identified all the other pieces in this puzzling painting fall into place.


The two heads in Zanetti’s etching do resemble the two women in the “Sacred and Profane Love.” It would also be interesting to speculate on the contribution of Giorgione and the Fondaco frescos to Titian’s painting. Giorgione did the section that faced the Canal but Titian did the section that faced the Merceria. Years later Vasari related the story of Giorgione’s chagrin when friends told him that his work on the Merceria side was even better than his work on the Canal section. There might have been more than jealousy behind Giorgione’s chagrin.

In his study of Titian’s early years, Joannides argued that in 1508/9 the young Titian still was deficient in drawing skills. As a result it is hard to imagine him with the skill necessary for the intonaco work of a fresco cycle. Despite the praise heaped on Titian’s section, I believe that Giorgione was responsible for the whole iconographical scheme of the Fondaco and did the necessary drawings either of the cartoons or the actual intonaco. Titian merely had to do the final painting, a task often left to assistants.

The Fondaco project was a huge success. Today we have only a few remnants as well as some later engravings, but the large classical figures depicted in brilliant colors must have awed and inspired artists and spectators for years. A panel of distinguished elder painters agreed that the parsimonious Venetian government should pay Giorgione the full 150 ducats he had contracted for. Titian was never mentioned in the contract. It would appear that he was a sub-contractor hired by Giorgione.

Titian’s painting and the Fondaco figures might have had the same patron. The discovery of the coat of arms of Niccolo Aurelio on the sarcophagus/fountain in the 19th century definitely established the connection of that Venetian official to the “Sacred and Profane Love.” According to Paul Joannides, Niccolo Aurelio

was also involved, naturally, with the Serenissima's artistic policies: he signed the payment order to Giorgione for the frescoes on the Fondaco dei Tedeschi. It could be that he had some responsibility for planning Giorgione's (and Titian's) schemes, but whether or not this is so, Niccolo must have been in contact with both Giorgione and Titian and would have been in a position to order works from them.


I discuss Niccolo Aurelio and his bride, Laura Bagarotto, in the paper referenced above. A very full account of the couple can be found in Rona Goffen's "Titian's Women."