The South Central Renaissance Conference held it's annual meeting in New Orleans this year from March 8 to March 11. The Society numbers over 170 members and includes three subgroups: the society for Renaissance Art History, The Queen Elizabeth I society, and The Andrew Marvell society. 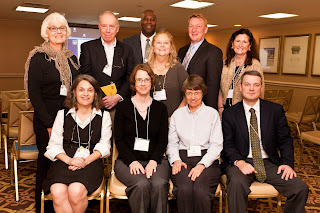 Altogether there were 47 panels usually consisting of three papers of no more than 20 minutes in length. This year quite a few papers were dedicated to Shakespeare and Elizabethan drama. Seven panels were dedicated to Art history. (To the left are some of the participants with me tieless in the back row)

I read my paper on Titian’s “Sacred and Profane Love” on Friday morning as part of a panel entitled “Reading the Meanings of Renaissance Art in the Veneto.” I thought my paper was well received by the fifteen or so attendees. Afterwards some told me that they found the Mary Magdalen interpretation convincing. During the question time a couple raised objections or thought further work was necessary, but I believe that all could now at least consider the Magdalen as a possibility for the identity of the two women in Titian's painting.

My paper had been preceded by two others.  One by Jill Carrington (Stephen F. Austin State University in Texas) on “The Paired Altar Tombs of Barolomeo Sanvito and Bartolomeo Urbino in San Francesco Grande in Padua and the Effigy in Tombs of the Veneto.” The other was by Jasmin Cyril  (Benedict College, South Carolina) on “Carlo Crivelli’s Madonna of the Cucumber: Sacred Image and Morphology.” This latter paper was especially interesting to me because I have largely overlooked Crivelli in my work on Giorgione and Titian. Dr. Cyril’s presentation included some beautiful images of Crivelli’s work. She noted that the cucumber or gourd so prominent in Crivelli’s many versions of the Madonna and Child was a sign of Resurrection.

My wife and I did attend some of the other sessions on Friday and Saturday including papers on such diverse subjects as “The Flea Hunt Reconsidered” by Yael Even of the University of Missouri—St. Louis, and “Francesco Colonna and Edward Burne-Jones: Love among the Ruins” by Liana De Girolamo Cheney of the University of Massachusetts Lowell. The former was a discussion of a genre of paintings that dealt with attractive young women searching in their  bodices for the elusive flea. The latter discussed the interest of the nineteenth century Burne-Jones in Colonna’s “Hypnerotomachia Polphilo,” a work revered by Renaissance art historians but practically unreadable by anyone else. Actually, if it weren’t for the woodcuts in Colonna’s work, I don’t think anyone would be interested.

The conference also featured an optional tour of the New Orleans Art Museum on Friday evening. A docent gave my wife and I a private tour of their excellent collection which seems strong in Asian and African art. They also have a good French section that includes a magnificent portrait of Marie Antoinette by Elizabeth Louise Vigee-Lebrun done in 1788. The Italian Renaissance section was small but included some good things.

I must confess that we skipped some sessions to tour New Orleans, a beautiful city that seems on the surface to have come back from the devastation of Hurricane Katrina. We took the St. Charles Street Car past some beautiful old homes as well as the lovely campus of Tulane University.

New Orleans is the craziest city I have ever visited. Our excellent Hotel Monteleone was in the midst of the riotous French Quarter. Compounding the usual crush of tourists was a major college basketball tournament going on in the Superdome. The narrow streets were crowded with revelers from morning through the wee hours. New Orleans is one of the few cities that allow people to walk the streets with open drinks in hand.

It all came to a head on Saturday evening with a parade in honor of St. Joseph whose celebration had been moved up from March 19 to make way for the even larger St. Patrick’s parade. The combined noise of marching bands, revving engines from the many exotic vehicles, and the crowd was deafening. It was a fitting end to a Renaissance conference for it brought to mind Venetian processions of old. On the one hand, there were statues of St. Joseph on gaily-colored floats, and on the other beautiful streetwalkers plying their trade.