Is it possible that Titian’s so-called “Flora” could be a representation of Mary Magdalen? In my interpretation of the “Sacred and Profane Love” I argued that  Titian represented Mary Magdalen in two guises: first, as a beautiful courtesan contemplating the error of her ways, and second, as the penitent sinner of the apocryphal gospels.

Titian painted many versions of the Magdalen during his long career reflecting not only his own regard for the saint as a personal intercessor, but also the demands of his patrons for beautiful images of the female saint who was second only in popularity to the Madonna. 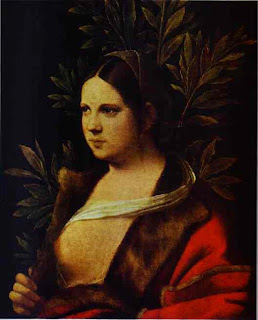 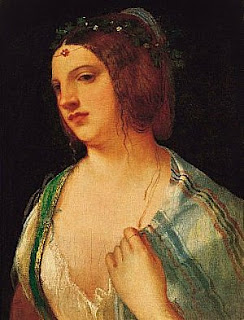 In his study of Titian’s early career Paul Joannides discussed a painting of a young woman “often thought to be a portrait of a courtesan,” and noted “an obvious link of mood and gesture with Giorgione’s Laura.” He wondered about the ambiguity of the action. Was the woman “opening her dress to reveal her breast, like Laura, or closing it in modesty”? He speculated that the woman might be “ a Magdalene in a Mary and Martha,” a subject “that would certainly have appealed to Titian, allowing him to contrast female types.”* [95-6]

Joannides failed to note that the “courtesan” wore a multi colored shawl that was the same as the one worn by one of his Magdalens painted much later. 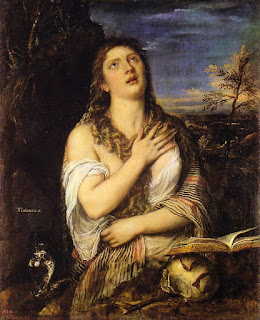 No one has ever been able to make more than a guess about the subject of the “Flora”. It was only in the mid-seventeenth century that a commentator attached the name of the Roman goddess of flowers to the beautiful woman in the painting. Although the name has stuck, modern commentators have brought forth objections and offered their own hesitant interpretations.

Hope looked in another direction for the meaning of the “Flora.”

But there was also a distinctive and more pervasive local tradition of pictures in portrait format of anonymous pretty girls, either clothed or partially nude, which were no more than elaborate pin-ups…. The identity of the girl as Flora is established both by the flowers in her hand and by her costume, which is of the type worn by nymphs in contemporary stage productions….(61-2)

In a 2003 catalog of an exhibition at London’s National Gallery, David Jaffe described the painting in this fashion.***(cat. # 11)

Flora is perhaps the supreme example of a genre developed in early sixteenth-century Venice showing ‘belle donne’, beautiful women, for the sake simply of their beauty. They were neither portraits—as such they would have seemed improper—nor did they usually have allegorical significance or mythological references….Titian did not invent the type, but developed the tradition represented by works such as Giorgione’s ‘Laura’….

The painting is a magnificent evocation of sensuality. The tumbling locks of hair, sometimes minutely described, trail down across her cheek and shoulder to her undergarment, which laps her breast and shoulder in undulating waves…before ebbing into the barely supported rose cloth which she gathers, or is perhaps discarding…

The image may be read as a generalized ‘Venus’ type. The flowers, perhaps roses, suggest identification with Flora.

In the catalog of the 2006 Bellini, Giorgione, Titian exhibition jointly sponsored by Washington’s national Gallery and Vienna’s Kunsthistorisches Museum, Sylvia Ferino Pagden considered the Flora “the finest and most successful of all sensuous half-length female figures in sixteenth-century Venetian painting….” She noted its “Venus-like sensuousness” but pointed out the ambiguity of the subject.

If it was Titian’s intention here to depict Flora, was he thinking of Ovid’s goddesses or Boccaccio’s courtesan? Or is his portrait an artistic blending of the two?...yet his Flora has more the demeanor of a goddess….her lack of attention to the viewer makes him aware of his own insignificance….
Titian’s re-creation of the classical goddess, however, lacks any reference to antiquity, even in the drapery….Flora’s chemise—usually seen merely peeking out from under a gown at the neck and sleeves but here serving as her main article of clothing overlaid by a cloth of brocade or damask—does not correspond to that of any classical figure and certainly not a Venetian bride,…# (226)

It should be noted that Titian’s “Flora” bears little resemblance to the goddess of flowers. There are no flowers tumbling from her hair and her dress was depicted by Ovid as adorned with many colors.

Ferino-Pagden did identify the flowers in the hands of Flora as rose, jasmine, and violet and claimed that they provide “a key to interpreting her.” However, she provided no further explanation. (For a close up of the flowers see link.)

In her study, “Nature and Its Symbols,” Lucia Impelluso noted that “the jasmine has often been considered a flower of Heaven or a symbol of divine love.” While usually associated with the innocence and purity of the Virgin Mary, it can often be seen “woven into garlands adorning the heads of angels and saints.” Moreover, “if associated with roses, it can connote faith.” ## (101)

The wild rose is also associated with Mary Magdalen. As far as the violet is concerned, Impelluso noted:

I realize that the jasmine, rose, and violet that “Flora” holds in her hand could refer to some one else, but one should certainly at least suspect Mary Magdalen.
Giorgione’s “Laura,” Titian’s early “courtesan,” and the “Flora” could all be considered versions of Mary Magdalen, and not just pin-ups. One significant objection, however, is the absence in each instance of the jar of ointment that is always associated with the Magdalen. Later, Titian displayed it prominently in the “Sacred and Profane Love,” as well as in his more obvious Magdalens.

Perhaps in this brief moment in time Venetian artists had come to believe that they could depict the essence of the Magdalen without resort to obvious iconographical symbols. Earlier, Giovanni Bellini had painted a Madonna and Child surrounded by two female saints. One is obviously Mary Magdalen but she is only recognized by her flowing red hair. ###