I am working on a new interpretation of the Louvre’s “Pastoral Concert”, one of the most famous paintings of the Venetian Renaissance. Variously attributed to Giorgione or Titian, no one has so far been able to come up with a plausible explanation of its subject. Before publishing the interpretation on my website, I would like to post some bibliographical information here. 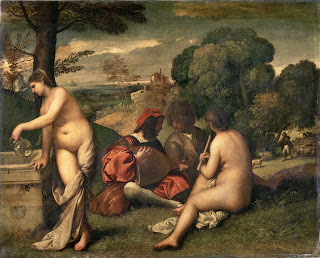 The December 1957 issue of The Journal of Aesthetics and Art Criticism featured an essay on the painting by Philipp Fehl entitled, “The Hidden Genre: a Study of the Concert Champetre in the Louvre.”[i] In his study Fehl limited himself to a discussion of the two female nudes in the painting.

My present proposition is simply this: the two women are not human. They are nymphs of the wood who, having been attracted by the music and the charm of the young men, have joined their concert. They are as invisible to the young men as they are, in the full beauty of the landscape which they bodily represent, visible to us. [157]

From this insight that was based primarily on an extensive analysis of literary sources, Fehl drew the following conclusion about the painting.

The picture, if we choose to look at it from this point of view, is now a true pastoral, in the spirit of the idylls of Theocritus. [157]

He did admit that a really convincing proof would require a poem or text which, unfortunately, he had not been able to find.

However, a year later famed Art historian Edgar Wind seemed to add his weight to Fehl’s description of the two nudes in Pagan Mysteries of the Renaissance.[ii]

The same 'philosophy of clothes' can be studied in Giorgione's 'Fete Champetre' in the Louvre. The nymphs, distinguished from the musicians by the absence of clothes, are meant to be recognized as 'divine presences', superior spirits from whose fountain the mortal musicians are nourished…

Wind’s comment was only in a footnote and one would suspect that he came upon Fehl’s interpretation while his own book was in process of publication.

In any event, in 1959 Patricia Egan took Fehl’s analysis a step further in an essay, “Poesia and the Fete Champetre” that appeared in the Art Bulletin.[iii] Egan also concentrated on the two nude females, but she regarded them as muses rather than nymphs. They are sister beings who “constitute the first and strongest section of the picture.”

the left side comprises the water-pouring “muse,” the fine young lute-player, the white gabled building by the lake, and the farther landscape; the enclosed landscape on the right side contains the flute-playing ”muse,” the shepherd boy, the farmhouse, the grove, and the goatherd with his flock. [305]

Egan found a contemporary “Tarocchi” card with an image identified as “Poesia”. Although clothed, she carried the pitcher and pipe (aulos) seen in the “Pastoral Concert”.

Entitled Poesia, the girl is seated beside a fountain on grass or leaves, using one hand to play a flute while with the other she empties a pitcher into a small body of water at her side….If we accept this degree of meaning to be implicit in the scene, we may add, tentatively, to the titles already bestowed on the picture, that of “Allegory of Poetry.” [304]

Egan admitted that the connections in the Tarocchi card have become somewhat weaker in the “Pastoral Concert.” “Poesia” has “twinned”, and each twin performs one of the actions depicted on the playing card.

Poesia as the personification of academic eloquence has twinned, and her actions, though simultaneous, no longer depend so closely on one another. [312]

Although Egan identified the nudes as muses and not as nymphs, she agreed with Fehl: the “muses’ belong to one world, the boys to another, the world of Poetry includes them all.” [312]

In 2006 Jaynie Anderson, in the catalog entry for the Bellini, Giorgione, Titian exhibition jointly sponsored by Washington’s National Gallery and Vienna’s Kunsthistorisches Museum, noted the contributions of Fehl and Egan, and claimed that their observations about the unworldly nature of the two nudes were now generally accepted by scholars.[iv] I fully agree and believe that in no way can these two females be considered as girl friends or prostitutes.