The colors of the garments of the men in Giorgione's "Three Philosophers" have hardly been noticed in the scholarly literature. Do they provide a clue to the subject of the painting? Below find an essay that supports the thesis that the Three Philosophers are actually the Three Magi but at the beginning of their journey. If so, this famous painting would also, like the “Tempest”, have a "sacred" subject. This post is the first in a series this summer where I reprise earlier essays on paintings by Giorgione and Titian as preparation for a projected book. If seen through a "sacred subject" lens, these paintings lose some of their mystery but none of their beauty. 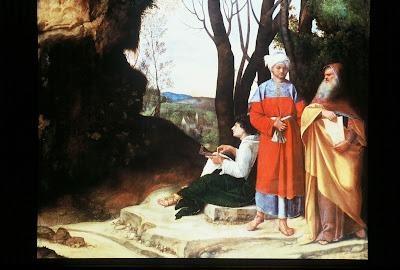 The "Three Philosophers" is one of only a handful of paintings that scholars definitively attribute to the great Venetian Renaissance master, Giorgione. It was one of the highlights of the magnificent 2006 exhibition, "Bellini, Giorgione, Titian: The Renaissance in Venetian Art," jointly sponsored by the National Gallery in Washington, and the Kunsthistorisches Museum in Vienna.

At the symposium that ended the Washington exhibition, one scholar entitled his talk, "The Moment of Giorgione." Another scholar who was given the task of summing up said that despite the greatness of the works by Titian and Bellini, the exhibition was all about "Giorgione." What did they mean?

Besides the universally acknowledged quality of the works attributed to Giorgione, there is an air of mystery about the painter. His death in Venice in 1510 at about the age of thirty-three cut short an incredibly promising career. Although Giorgio Vasari in his famous work on Renaissance painters devoted a small chapter to Giorgione, there is little biographical data. Scholars think that he apprenticed in the workshop of the prolific Giovanni Bellini, but then went off on his own. He was either a mentor, colleague, or rival of the younger Titian who apparently completed some of Giorgione's unfinished paintings after his untimely death.

Giorgione was one of the first Italians to work with oil, a medium that enabled him to break new ground especially in landscape. His style, often called Giorgionesque, influenced Titian to such an extent that scholars often attribute the same paintings to one or the other, or sometimes to both. Moreover, there is an enigmatic quality about the works of Giorgione that is part of his fascination. He is the master of what is called "the hidden subject."

The "Three Philosophers" is a good example. This painting depicts three men standing on a hilltop overlooking a beautiful valley with the sun setting in the West behind a range of mountains. They are dressed in colorful Oriental robes and face a dark rock formation or cave. They and the cave are illuminated by another source of light. Who are they and what are they doing there?

In 1525 Marcantonio Michiel, a Venetian patrician and connoisseur, catalogued the paintings in the collection of Taddeo Contarini, another Venetian aristocrat, and described this one as "three philosophers in a Landscape." Two hundred and fifty years later the painting had found its way to the Kunsthistorisches Museum in Vienna, its current home. In a 1783 catalog it was called, "Three Magi." In the nineteenth century English art doyen Anna Jameson also saw the Magi in this beautiful painting.

I must mention a picture by Giorgione in the Belvedere Gallery, well known as one of the few undoubted productions of that rare and fascinating painter, and often referred to because of its beauty. Its significance has hitherto escaped all writers on art, as far as I am acquainted with them, and has been dismissed as one of his enigmatical allegories. It is called in German, Die Feldmasser (the Land Surveyors), and sometimes styled in English the Geometricians, or the Philosophers, or the Astrologers. …I have myself no doubt that this beautiful picture represents the “three wise men of the East,” watching on the Chaldean hills the appearance of the miraculous star…” *

Today, most scholars accept the "philosopher" interpretation even though they find it difficult to identify which ones. Indeed, the catalog of the National Gallery exhibition and the audio commentary dismissed the "Magi" interpretation. Nevertheless, recent findings suggest that the Magi are making a comeback.

In the catalog of the unprecedented Giorgione exhibition in 2004, a collaboration of the Kunsthistorische Museum and the Accademia in Venice, Mino Gabriele argued that in this painting Giorgione depicted the Magi not at end of their journey but at the beginning, that is, when they first saw the Star of Bethlehem. His most compelling point had to do with the lighting of the painting. If we look carefully, we can see the sun setting in the West behind the mountains, but the three men and the rock formation in the foreground are being illuminated by another source. According to the medieval legend which Giorgione apparently followed, the light of the Star which rose in the East was even brighter than the sun at midday.

Moreover, at the conclusion of the Symposium that ended the exhibition in the National Gallery Salvatore Settis, who had discussed the painting in his book on the “Tempest” offered a striking piece of evidence in support of the Magi. The exhibition itself had done an excellent job of educating the public on the value of using scientific techniques to evaluate the "underpainting" of some of these Renaissance masterpieces. X-rays and other techniques show many "pentimenti" or changes of mind on the part of the artists. When working with oils, the artists would frequently alter their paintings by painting over the original.

In the original version the old man on the right dressed in gold is wearing an elaborate headpiece crowned with a kind of solar disk. For some reason Giorgione decided to discard it in favor of a simple hood. Nevertheless, when the scholar projected an image on the huge screen of a painting by Vittore Carpaccio of the arrival of the Magi in Bethlehem, the old man in that painting was wearing the kind of headpiece discarded by Giorgione.

Perhaps both Carpaccio and Giorgione took their inspiration from the elaborate public processions honoring the Magi which were common in the later Medieval world. Nowhere were they more elaborate than in Venice. More than any other city, Venice was aware of the styles and costumes of the Orient.

Finally, I believe that there is one more piece of evidence that so far has eluded scholars but will help to make the case for the Magi. The most obvious feature in the painting is the brilliant color of the costumes. In the ancient legend the gifts of the Magi were gold, frankincense, and myrrh. In the medieval legend, the oldest of the Magi was the bearer of the gold; the middle-aged man carried the myrrh; and the youngest brought the frankincense. The golden garment of the oldest man needs no explanation. In my encyclopedia the color of myrrh is a dark red, while the color of frankincense can be white or green, the colors of the sitting young man.

In his classic work on Medieval iconography, Emile Male discussed the three Magi and their gifts.

Of all these legends, none was more scrupulously followed by artists than that which assigned a different age to each of the magi….the first king is always shown as an aged man, the second as middle-aged, and the third as a beardless youth….The tradition is very old; it was already followed by miniaturists in the eleventh century, and goes back even further in time. The first mention appears in a strange passage attributed to Bede, and can be found in the Collectanea accompanying his works: “the first Magus was Melchior,” said the Pseudo-Bede, “an old man with long white hair and a long beard…It was he who presented gold, symbol of divine royalty. The second, named Caspar, was young, beardless, and ruddy; he honored Jesus by giving incense, an offering that manifested his divinity. The third, named Balthazar, of dark complexion (fuscus), wearing a full beard…bore witness by offering myrrh, that the Son of Man would die. **

Could it be that Giorgione hid his subject by making it obvious? I think it more likely that most of Giorgione’s contemporaries would have seen the Magi in this great masterpiece.