Last year the posts on Giorgione et al... were all devoted to the various interpretive discoveries that followed upon my initial intuition that Giorgione's Tempest had a sacred subject, "The Rest of the Holy Family on the Flight into Egypt." This year I intend to reprise some of the review articles that have appeared on this site since its inception in 2010. I begin with a review of Giorgione's Tempest by Salvatore Settis, the essential starting point for any student of Giorgione. 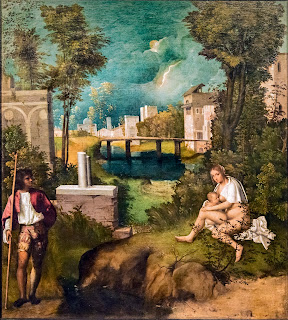 In researching my interpretation of the Tempest as “The Rest on the Flight into Egypt,” no book has been of greater assistance than Giorgione’s Tempest, written by Salvatore Settis in 1990. In addition to providing an in depth analysis of practically every previous interpretation, Professor Settis also laid down a series of iconographical ground rules that should be used in any interpretation.

For example, in his introduction he noted:

“Interpreting the Tempest means providing “a well documented explanation for each feature, and fitting all together into one persuasive framework.” (2)

Indeed, he came very close to identifying the subject of Giorgione’s most famous painting. At least he did see that the painting had a “sacred subject” but instead of seeing the Woman as Mary, the new or second Eve, he identified her as the original Eve nursing her first-born son, Cain. The Man in the painting is Adam in the guise of a Venetian aristocrat accompanying his wife after their expulsion from the Garden of Eden.

Even though his book is a must for anyone interested in Giorgione, his ingenious and painstaking interpretation came under serious criticism and was accepted by virtually no one. He argued that the famous painting must be treated like a puzzle and that in any interpretation all the pieces must fit, and fit easily without being squeezed into position.

Unfortunately, he often violated his own maxim. The major pieces of the puzzle are the Man, the Woman and Child, the broken columns, the plant in the foreground, and the storm and city in the background.

For Settis, the Man is Adam after the expulsion from the Garden of Eden. The nude Woman is Eve nursing her newborn son, Cain. The broken columns are a symbol of death which has entered the world as a result of sin. The plant is there to cover Eve’s nakedness, although obviously doing a very poor job. The city in the background is the lost Paradise forever barred to the Man and Woman who are doomed to a life of toil and hardship. The storm and lightning represent the wrath of God not only on the erring couple but also on what he called a serpent slithering into the rock beneath the heel of the woman.

Here are his words concerning the Man and the Woman:

“Adam leans, not on the short-handled spade of his Bergamo counterpart, but on a singularly long staff: various interpreters have agreed that this could be a soldier’s lance, a traveler’s wand or simply a generic tool. The allusion to the manual labor prescribed in the biblical text is underplayed, almost fleeting, for this Adam is an elegant Venetian…The medieval tradition portraying Adam at work…has evolved to show Adam at rest, with Eve as mother at his side….” (113)

“The handsome clothes belong to a Venetian gentleman, not to a peasant or a fisherman, and are appropriate with the attenuated image of the tool:  in the hands of this meditative, or resting, figure the staff must allude to manual labour. Neither spade nor hoe, it has a point at one end but so hidden in the grass that it is only visible on a close and careful examination.” (114)

“Eve is seated opposite him a white wrap that barely covers her. (sic) The baby in her lap and her own nakedness indicate recent childbirth, a familiar schema in earlier art. The slender bush that grows out in front of her cannot be a simple decoration in this painting of such deliberate construction: its compositional importance has already been noted by other interpreters…who have tried in vain to establish its meaning.” (115) 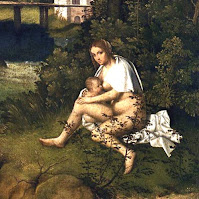 In chapter 4 Settis provided a number of images of Adam and Eve after their expulsion from the Garden of Eden. It was an impressive feat but in every image the Man and the Woman do not exhibit the disparity of clothed and unclothed figures found in the Tempest.

For example, in Amadeo’s, Bergamo bas-relief, both Adam and Eve are nude, just as they are in Jacopo della Quercia’s relief in St Petronio in Bologna. In all the other images it is the same. Either Adam and Eve are both nude, or both clothed.

The Woman’s nudity is only explained as a sign of “recent childbirth,” but the child in the Tempest is obviously almost a year old. He holds himself up nicely while nursing. Settis did not identify the plant in the Tempest, but he did argue that it is there to cover the Woman’s nakedness. He also argued that the dead root beneath the woman’s heel was not part of the plant but the “serpent” slithering into the rock fleeing God’s wrath.

Settis, like some others, argued that the lightning bolt in the background was a symbolic representation of God, and that it and the storm were hovering over the couple forever banished from Paradise. The gates of Paradise have forever been closed to them and the broken columns are symbolic of death. Yet according to the rules of perspective the storm and lightning bolt are miles in the distance. Moreover, in the foreground the couple is bathed in sunlight. They show no trace of fear, anxiety, or loss.

Speaking of Paradise, why would one of the buildings show an emblematic representation of Padua’s Carrara family?

Note: Below are some relevant notes from Settis' text.

p.2. “If we can perceive the beauty of an object within its meaning and not outside it, within its history and not outside it, and if we can comprehend and not simply admire, attribute and acquire, perhaps then we can really slaughter the ‘art’ which we have invented and free it from a contrived immortality.”

p.2. “In the study of art…the history of form has gradually parted company from the history of content: ‘art criticism’ elaborates lists of attributions and comments on aesthetic value and is thus de facto opposed to iconology, which attempts to decipher the meaning of inherited images.”

p.3. “The great, regal, public museum,…the bourgeois drawing-room…In both of them statues and pictures are snatched from their original context, in which co-ordinates of meaning were mapped our around them, and are offered to the visitor for their aesthetic value only.”

p.4. “Art criticism has thus produced pages of exquisitely artistic prose which deliberately competes in stylistic effect with the picture it describes, as well as pages of awkwardly-phrased enthusiasm. But in both cases the cost has been a high one: by favoring form, the function of a statue or painting as bearer of a message…has been completely overshadowed.”

p.10. “A complete understanding of a statue or a painting should place the question of style within the framework of careful research on its meaning as a vehicle of communication, and on its ways of expressing that meaning. For form and content…are born at the same time…”

p.13. “Vasari’s words bear witness to the difficulties of understanding Giorgione’s subjects, even a few decades after his death….Bur Vasari must have momentarily lost his concentration when he looked at the four facades of the Fondaco….The few things we do know about the decoration of the Fondaco indicate a precise iconographical Programme, however disjointed its features may seem to be.”

p.82. “it is usually the case that we instantly recognize a picture  of a woman and child as Mary and Jesus….We recognize Virgin and Child above all by means of the many different images in our memory and form, as it were, a single type. It is visual experience itself, repeated over and over again, but always receptive, that tells us the title of the picture.” …

p.82. “But that memory can be lost; and when this happens an image that was created for a public that could understand it becomes incomprehensible to observers who are alien to that particular figurative culture. This can give rise to absurd and fantastic interpretations.”

p. 129. “In choosing a painting as a vehicle for expressing personal feelings, ‘inventiveness’ must have been severely hampered by the inescapable weight of authority represented by previous iconographic tradition. The transformation of an ‘interior subject’ into something less comprehensible entailed searching out an unusual iconography, and also perhaps attenuating its meaning by eliminating or toning down its essential features.”

p. 129/130. “Even more complex and difficult was the task of fitting a religious theme into this ‘closed’ and private use of art….But to a painter in the time of Palma il Vecchio and Giorgione, a Christian subject would have had a different weight….The codification of iconography for religious subjects must have been that much more forceful for being accepted as serving the true Christian faith. Equally, it was that more difficult to dare to choose a Christian theme as a way of expressing personal thoughts.”