Historical Imagination and the Venetian Renaissance

In my interpretation of Giorgione's Tempest I argued that the famous painting has a "sacred subject,"  "The Rest on the Flight into Egypt."  Since my initial discovery back in 2005, subsequent reading has led me to see that an increasing number of scholars are coming to understand the role that religion played in the life and art of Renaissance Venetians. Nevertheless, it is still hard to overcome the view that has prevailed for centuries that the Renaissance turned its back on Christianity in favor of the world of pagan Greece and Rome.

For example, scholars sometimes point to the passage in the will of Gabriele Vendramin, the owner of the Tempest, where he directed that his collection not be dispersed or sold upon his death. He said that the collection had given him great consolation in moments of quiet contemplation. Scholars assume that he was contemplating the works of antiquity but the paintings in his collection were mainly "sacred" or devotional subjects. [Notice Titian: "Gabriele Vendramin with Brother and Nephews Venerating a Relic of the True Cross"] Indeed, the great majority of paintings found in the homes of Venetian patricians were of sacred subjects, including many versions of the "Rest on the Flight into Egypt.

In our modern world it takes a great amount of "historical imaginaton" to see things as Renaissance Venetians saw them.

Below find selections from two great scholars on the need for “historical imagination” for a correct understanding of the past. The first is from Piety and Patronage in Renaissance Venice, by the late Rona Goffen. Her small book is one of the best monographs ever written about the Venetian Renaissance. Referring to the importance of the sermons of Bernardino of Siena, and Lorenzo Giustiniani, the saintly first Patriarch of Venice, she wrote of the need for an historically informed imagination.

In these and other similar passages, Bernardino and Giustiniani declared their belief in the Immaculacy of the Madonna. Their influence on Venetian piety must have been as pervasive during the Renaissance as it is difficult today to gauge in any precise way. Nevertheless, their thoughts and writings constitute part--a very important part--of the original context of sacred art in Renaissance Venice. One must attempt to reconstruct that context in the historically informed imagination. [p.79]

Goffen stressed the need to see Renaissance Venice, especially its art, through the eyes of contemporary Venetians. She wrote,

No Venetian--and no Venetian Franciscan--could have been unaware of the rich associations, both political and spiritual, of the Madonna in Venice, and indeed of the identification of the one with the other. after all, Venice, too, was apostrophized as a Virgin, always safe in the embrace of her beloved Evangelist St. Mark... [p. 145]

The second selection on the need for historical imagination comes from C.S. Lewis, whose greatness as a scholar is somewhat obscured today by the extraordinary success of his popular Narnia stories. Nevertheless, he was one of the greatest twentieth century students of Medieval and Renaissance literature. The following excerpt is taken from his small but brilliant study of Milton’s "Paradise Lost." In chapter IX of  A Preface to Paradise Lost,  Lewis discussed the need to see things through Milton’s eyes.

"Now when we read Paradise Lost,…Milton is on his own ground, and it is we who must be the learners...

"Our whole study of the poem will then become a battle between us and the author in which we are trying to twist his work into a shape he never gave it, to make him use the loud pedal where he really used the soft, to force into false prominence what he took in his stride, and to slur over what he actually threw into bold relief. The older modern reading of Dante, with its disproportionate emphasis on the Inferno, and, within the Inferno, on the episode of Paolo and Francesca, is an example of this…."

"Fortunately there is a better way. Instead of stripping the knight of his armour, you can try to put his armour on yourself; instead of seeing how the courtier would look without his lace, you can try to see how you would feel with his lace; that is, with his honour, his wit, his royalism, and his gallantries out of the Grand Cyrus. I had much rather know what I should feel like if I adopted the beliefs of Lucretius, than how Lucretius would have felt if he had never entertained them. The possible Lucretius in myself interests me more than the possible C.S. Lewis in Lucretius…."

"You must, so far as in you lies, become an Achaean chief while reading Homer, a medieval knight while reading Malory, and an eighteenth century Londoner while reading Johnson. Only thus will you be able to judge the work ‘in the same spirit that its author writ’ and to avoid chimerical criticism…."

"We must therefore turn a deaf ear to Professor Saurat when he invites us ‘to study what there is of lasting originality in Milton’s thought and especially to disentangle from theological rubbish the permanent and human interest.’…Our plan must be very different—to plunge right into the ‘rubbish’, to see the world as if we believed it, and then, while we still hold that position in our imagination, to see what sort of poem results…."

"I myself am a Christian, and that some (by no means all) of the things which the atheist reader must ‘try to feel as if he believed’ I actually, in cold prose, do believe. But for the student of Milton my Christianity is an advantage. What would you not give to have a real, live Epicurean at your elbow while reading Lucretius?"

A few years ago I attended a Giorgione symposium at Princeton on a cold Saturday in December.  Next day, my wife and I got up early to go to Mass at the Catholic church just across the street from the campus. It was December 12, the feast day of Our Lady of Guadalupe, but still we were surprised to find a good sized congregation in attendance at the 7:00 a.m. Mass. Even more surprising was the display that filled one of the two side altars. There was an image of Our Lady of Guadalupe along with an incredible array of flowers that even included a colorful working fountain. Catholic churches are usually somewhat bare during the season of Advent.

Before beginning Mass the presiding priest, obviously Mexican, was on fire as he told the congregation of the story of Juan Diego and the miraculous appearance of Mary at Guadalupe almost 500 years ago. Most surprising was his announcement that 3 hours earlier, at 4:00 a.m., the church had been packed with over 600 worshippers gathered for prayers on the morning of this great feast. Afterwards, we discovered that there was a substantial community of Latino workers in Princeton.

I relate this story because it occurred to me that even the greatest and wealthiest of Renaissance Venetian patricians would have been closer in spirit to these 600 Latino worshippers than he would have been to the 100 or so learned art historians who had attended the Princeton symposium. To put it another way it would take a great deal of imagination for an ordinary American to understand the mentality that could get up at 4:00 a.m. on a dark, rainy, morning to go to church and fill it with beautiful flowers in honor of the Madonna.

You don't have to be a believer to understand the art of the Venetian Renaissance but you have to try to see through the eyes or ordinary believers. In fifteen years of lecturing on Giorgione's famous painting, I have found that ordinary Catholics have no difficulty in seeing the Madonna nursing her child in the Tempest. ### 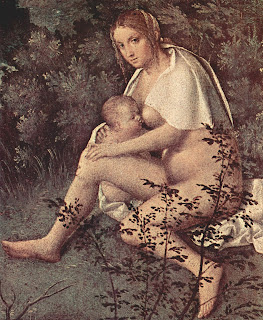