I owe a great debt to the late Rona Goffen. When I originally saw the nudity of the woman in the Tempest as Giorgione’s way of depicting the Immaculate Conception of Mary, I just assumed that the doctrine was important in Catholic Italy. However, it was only after a chance encounter with Goffen’s “Piety and Patronage in Renaissance Venice”* that I came to realize just how important the Immaculate Conception was in Giorgione’s time.

Goffen wrote many books and articles on the Italian Renaissance but in my opinion this small volume was her best work. In her book, subtitled, “Bellini, Titian and the Franciscans,” she never discussed the Tempest but her discussion of the historical background of the controversial doctrine of the Immaculate Conception solidified my thoughts about Giorgione’s most famous painting. Moreover, she insisted that the art of the Venetian Renaissance could only be understood by attempting to see it through the eyes of contemporary Venetians.

In discussing the writings of prominent clerics like St. Bernardino of Siena, a patron saint of Venice, and Lorenzo Giustiniani, the saintly first Patriarch of Venice, she pointed out the importance, but also the difficulty, of seeing things through their eyes.

In these and other similar passages, Bernardino and Giustiniani declared their belief in the Immaculacy of the Madonna. Their influence on Venetian piety must have been as pervasive during the Renaissance as it is difficult today to gauge in any precise way. Nevertheless, their thoughts and writings constitute part--a very important part--of the original context of sacred art in Renaissance Venice. One must attempt to reconstruct that context in the historically informed imagination. (79)

Seeing through Venetian eyes means understanding first of all the great importance of religion to the ordinary Venetian. Because of its many disputes with the Papacy, Venice is sometimes regarded as a proto-Protestant state when in reality it was usually more Catholic than the Pope. Goffen understood that the Republic identified itself with the Madonna and her Immaculate Conception.

No Venetian--and no Venetian Franciscan--could have been unaware of the rich associations, both political and spiritual, of the Madonna in Venice, and indeed of the identification of the one with the other. After all, Venice, too, was apostrophized as a Virgin, always safe in the embrace of her beloved Evangelist St. Mark...(145).

This confluence of the sacred and the secular found its way into Venetian art.

And both Pesaro altarpieces embody that singular combination of sacred and civic elements that characterizes Venetian art, Venetian history, and Venetian piety, together with the very personal concerns and ambitions of the donors, concerns in themselves both spiritual and secular. In Venice the image of the Immaculate Conception combines the sacred and the secular in a very particular way. (136)
Goffen concentrated her attention on the Frari, itself dedicated to the Immaculate Conception, and on its incomparable altarpieces. The dust jacket of her book gives a good summary.

The church of Santa Maria Gloriosa dei Frari in Venice encapsulates the history of Venetian Renaissance art as well as the histories of a patrician family, a religious order, and a city. The decoration of the Frari—notably commissioned by members of the Pesaro family—not only reflects their piety but their rivalry; in addition, it represents the particular concerns and the character of the Franciscan order and alludes to the relationship between church and state in Renaissance Venice. All this is embodied in the altarpieces pain ted for the Frari by two of the greatest masters of Venetian art—Giovanni Bellini and Titian.

In chapter 2 Goffen described the influence of Franciscan spirituality on Bellini’s famous triptych. 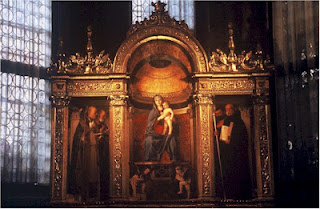 The Frari triptych was his fourth (and last) great commission of works painted for the Franciscan order or with a specifically Franciscan theme,...Bellini learned much about Franciscan sensibility and Franciscan spirituality. (54)
Chapter 3 deals with the “Assunta”, the painting that established Titian’s reputation. Although called the “Assunta”, the “theological and spiritual context is the triumph of the Immaculate Conception.” (74) 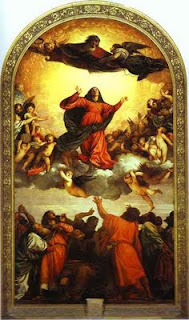 For Titian and his Franciscan patrons, there can be no doubt that "S. Maria Gloriosa" implied "S. Maria Immacolata"...Given the liturgical and theological assimilation of the Virgin's Immaculate Conception with her Assumption, it comes as no surprise that the visual imagery of the former was frequently based upon representations of the latter. (93)

Goffen found the source of Titian’s work in a sermon by Lorenzo Giustiniani, whose collected sermons had been printed in Venice in 1506.

There is another text, however, that can almost be read as the libretto for Titian's "opera," and that is the sermon for the feast of the Assumption by Lorenzo Giustiniani...it seems that the artist or his Franciscan patrons must indeed have been referring to Giustiniani's text, or something very like it.
Chapter 4 is devoted to Titian’s famed Pesaro altarpiece. Looking at that painting through Goffen’s eyes is a revelation. 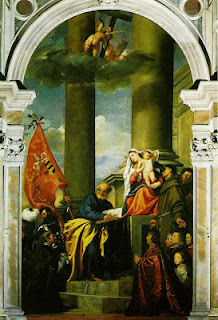 This dual sacred and secular imagery, combining the representation of the Immaculate Conception with references to the Serenissima, is embodied also in Titian's Assunta of the high altar.
In her last chapter, “The Cult of the Madonna in Venice,” Goffen claimed the Bellini triptych, Titian’s Assunta and Pesaro altarpiece, and even his Pieta were representations of the Immaculate Conception.

Titian's Pieta must be considered, therefore, together with Bellini's triptych and Titian's own earlier works for the Frari. The four altarpieces (or the three alone, in situ) represent the dedication of the Frari to the Immaculate Conception in visual imagery that suggests the similarities of the Madonna, and hence her church, with the Most serene republic of Venice. (154)

In the year 1500 Venice was not only the greatest city on the Italian peninsula but it was also the wealthiest and most powerful nation in Europe. England, France and Spain were just emerging from a century of civil wars. Germany was hopelessly divided and the Emperor was little more than a penniless figurehead. The Papacy was still contending with threats to its authority from Roman warlords and Conciliarist bishops. Only Venice seemed to have the will and wherewithal to deal with the Ottoman Empire.

To read Rona Goffen’s book is to understand that in Giorgione’s time every Venetian would have believed that they owed it all to the Immaculata. Yet in history things can sometimes turn on a dime. Only a decade or two after Giorgione’s death radical Protestant reformers were destroying images of the Madonna all over Europe.

It is hard for moderns, even Catholics, to understand or sympathize with the beliefs of Giorgione and his patrons. Interestingly, in the nineteenth century as hordes of Catholic immigrants were pouring into the United States, the Catholic hierarchy dedicated the country to the Immaculate Conception. Today, most of the descendants of those immigrants have no idea of the meaning of the doctrine.

Rona Goffen's book is not just her best work: it is probably the single best guide to the Venetian Renaissance.
###