Leo Steinberg:The Sexuality of Christ in Renaissance Art and in Modern Oblivion. 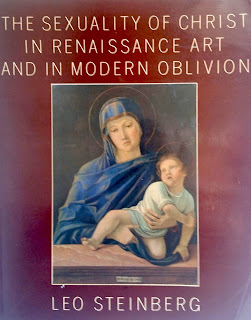 In his controversial and ground-breaking 1983 study, famed art historian Leo Steinberg explored the theological basis for the use of nudity in depictions of the infant Jesus, as well as the crucified Savior. In all honesty I must acknowledge that Steinberg never stated that his arguments could extend to the Virgin Mary. Neither did he ever see the nude Woman of Giorgione's Tempest as the Madonna.  Nevertheless, in my paper on the Tempest I argued that the nude Woman nursing her child is the Madonna, and I fail to see how the following passages from Steinberg's study cannot apply to Giorgione's Woman.
My third consideration concerns Christ in the character of Redeemer. His manhood differs from that of all humankind in one crucial respect, which once again involves the pudenda: he was without sin—not only without sins committed, but exempt from the genetically transmitted stain of Original Sin. Therefore, applied to Christ’s body, the word “pudenda”…is a misnomer…For the word derives from the Latin pudere, to feel or cause shame. But shame entered the world as the wages of sin. Before their transgression, Adam and Eve, though naked, were unembarrassed; and were abashed in consequence of their lapse. But is it not the whole merit of Christ, the New Adam, to have regained for man his prelapsarian condition? How then could he who restores human nature to sinlessness be shamed by the sexual factor in his humanity? And is not this reason enough to render Christ’s sexual member, even like the stigmata, an object of ostentatio? [p. 17] We are faced with the evidence that serious Renaissance artists obeyed imperatives deeper than modesty—as Michelangelo did in 1514, when he undertook a commission to carve a Risen Christ for a Roman church. The utter nakedness of the statue, complete in all parts of a man, was thought by many to be reprehensible. ... But the intended nudity of Michelangelo’s figure was neither a licentious conceit, nor a thoughtless truckling to antique precedent. If Michelangelo denuded his Risen Christ, he must have sensed a rightness in his decision more compelling that inhibitions of modesty; must have seen that a loincloth would convict these genitalia of being “pudenda,” thereby denying the very work of redemption which promised to free human nature from its Adamic contagion of shame... We must… credit Michelangelo with the knowledge that Christian teaching makes bodily shame no part of man’s pristine nature, but attributes it to the corruption brought on by sin. [p. 18]

The candor of Michelangelo’s naked Redeemer consummates a development traceable through two and a half centuries of devotional art. I reproduce a sampling of representative instances. But I should feel defeated were these works taken as illustrations of texts, or as theological arguments. On the contrary: the pictures set forth what perhaps had never been uttered. They are themselves primary texts... [p. 23]

The pictures tell us to reverse the priorities. Their chronology demonstrates that the conspicuous display of the privates, instead of resulting incidentally from the Child’s total nudity, is more likely the motive that prompted this nudity. [p. 28]

No longer was it conceivable that Christianity had once, during the Renaissance interlude, passed through a phase of exceptional daring, when the full implications of Incarnational faith were put forth in icons that recoiled not even from the God-man’s assumption of sexuality. [p. 45]

And because Renaissance culture not only advanced an incarnational theology... but evolved representational modes adequate to its expression, we may take Renaissance art to be the first and last phase of Christian art that can claim full Christian orthodoxy. Renaissance art… harnessed the theological impulse and developed the requisite stylistic means to attest the utter carnality of God’s humanation in Christ. It became the first Christian art in a thousand years to confront the Incarnation entire, the upper and lower body together, not excluding even the body’s sexual component. [p. 72]

Leo Steinberg, The Sexuality of Christ in Renaissance Art and in Modern Oblivion, NY, 1983.