The John and Mabel Ringling Museum of Art in Sarasota, Florida was built by circus magnate John Ringling on the grounds of his beautiful Italianate villa, Ca d’Zen around 1925.  The circus wintered in Sarasota and Ringling, one of the richest men in America in the 1920s, hoped that a world-class art collection might help to promote the city.

He was a little late in entering the Old Master collecting game since earlier magnates had gobbled up most of the available great works of Renaissance Masters. As a result he turned to works of the period that followed the Renaissance, the so-called Baroque. Baroque art was out of favor at the time especially since contemporary critics regarded it as smacking too much of the religious fervor of the Catholic Counter Reformation. Even though his collection includes works from the Renaissance through the eighteenth century, the emphasis is on the Baroque.

One of the most popular paintings in the Ringling is a striking depiction of “Judith with the Head of Holofernes”, a magnificent example of Baroque art by Francesco Cairo. It depicts the Biblical Jewish widow Judith, who saves her people by dressing up in all her finery to seduce and then kill the leader of the enemy forces. Here she is presented in a mixture of light and dark that is so characteristic of the Baroque. She has already done the deed and decapitated the drunken Holofernes with his own sword, which is so elaborately done. As usual Judith is attended by her servant who will carry the head back to the Jewish camp and tell its leaders that their danger is over.

The Museum is currently featuring an exhibition of paintings by famed Venetian artist Paolo Veronese and his workshop that includes portraits, mythological subjects, and large-scale sacred subjects. The exhibition is augmented by works of Veronese contemporaries from the Ringling’s own collection. For example, there is a spectacular version of the “Rest on the Flight into Egypt,” one of the most popular subjects in Venetian art.

In this version the Holy Family has fled from the deadly designs of King Herod and reached the relative safety of Egypt. They pause so that Madonna can rest and nurse her Child. Joseph looks on and pours some water for Mary while colorful angels hover about bringing fruit down from a palm tree. The palm was part of a famous legend that had the tree bending down and the command of the infant so that Joseph could pick its fruit. Among other things this painting shows that paintings based on apocryphal legends remained popular after the Reformation despite the strictures of the Council of Trent.

The Museum’s bookshop features a little catalog entitled, “Curator’s Choice,” a sampling of the Ringling collection by the aptly named curator, Virginia Brilliant. It features some works from the Renaissance and the eighteenth century but the emphasis is still on the Baroque. There are three works by Rubens; a striking bust of St. Andrew by Anthony Van Dyck; a full-length portrait by Diego Velazquez of Phillip IV, the young King of Spain; and another Judith by Fede Galizia. The Museum's website provides very good access to the collection.

The grounds of the Museum are really lovely and also include a Circus Museum that is well worth visiting. The Museum also has a variety of cafes and a very nice gift shop. A provision in John Ringling’s will allows free admission on Monday and we along with a horde of tourists took advantage of Ringling’s beneficence.

Besides being a cultural and arts center Sarasota, which probably has all the same problems as any other American city, still presents a beautiful waterfront prospect. We stayed in nearby Longboat Key, a long narrow island that stretches between Sarasota Bay on one side and the Gulf of Mexico on the other.Longboat Key is full of expensive beach homes, condos, and hotels but we always like to stay at the Rolling Waves Cottages: eight tiny cottages that are a real throwback to the 1950s.

These housekeeping cottages are nothing fancy but they are well equipped and maintained. The best part though is the beautiful white sandy beach that is only a few paces from your door. You practically have the beach all to yourself except for the pelicans and terns that continually dive for fish in a spectacular aerial display. Indoors and outdoors, there is much to see in Sarasota. ### 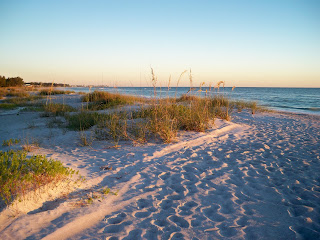 Email ThisBlogThis!Share to TwitterShare to FacebookShare to Pinterest
Labels: Baroque, Rest on the Flight into Egypt, Ringling Museum