On October 4, 2010 I put up a post on this site that suggested that Mary Magdalen is the subject of Giorgione's Laura. Since that time I have put up a number of posts that have argued that other mysterious paintings of beautiful women of the Venetian Renaissance could also be Mary Magdalen. Below find a summary article. 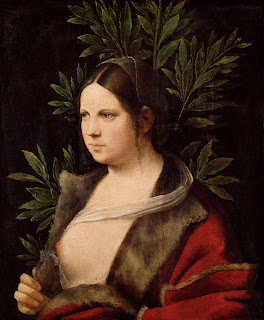 Giorgione’s Laura has defied interpreters for over 500 years. It is a relatively small half-length painting (41 x 33.6 cm) of a pensive young woman who looks off to the right at the source of light that illuminates her face and partially bare chest. She seems to wear only an oversized fur-lined garment that is opened to reveal one bare breast. The painting now hangs in Vienna’s Kunsthistorisches Museum.

The catalog of the 2004 Giorgione exhibition, jointly sponsored by the Kunsthistorisches Museum and the Accademia in Venice, called it a “Portrait of a Young Woman,” and only placed the popular title Laura in parenthesis. Sylvia Ferino-Pagden and Giovanna Nepi-Scire, two of the world’s leading Giorgione scholars, and curators of their respective museums, edited the entire catalog and also combined on the Laura catalog entry. They did an excellent job of tracing the provenance of the painting and firmly supporting the attribution to Giorgione.

They also did a thorough evaluation of the unique inscription on the back of the painting: “on June 1 1506 this was made by the hand of master Giorgio from Castelfranco, the colleague of master Vincenzo Catena, at the instigation [instanzia] of misser Giacomo.” [i] The inscription was only deciphered in the nineteenth century but the two scholars believed that there was good evidence to support its authenticity.

Today most scholars agree that the seventeenth century identification of the young woman as Petrarch’s lover, Laura, is not tenable. Moreover, the painting cannot even be considered a portrait since no respectable woman of the time would have sat for such a depiction.

Some have argued that it could be a depiction of a Venetian courtesan. The catalog pointed to the finding of one scholar that the sumptuous fur-lined robe was “the winter dress of a Venetian woman of pleasure.” On the other hand, there are signs such as the thin white veil and the laurel that traditionally refer to conjugal virtue. Here is the catalog’s summation.

as noted by Goffen (1997), the thin white veil that partly covers her hair and falls over her breast is a typical accessory of married women…. The paradox that accompanies the interpretation of this painting lies in the fact that laurel is also a symbol of conjugal virtue…Giorgione’s Laura—regardless of whether she is a learned courtesan or a virtuous wife—is characterized by the extraordinary charge of sensuality and eroticism that makes this image unique in the painting of the early 16th century.

The Laura might not be as unique as the authors of the catalog entry suggest.  Other contemporary paintings also exhibit a mixture of eroticism and conjugal virtue and they have also defied interpreters. However, I believe that the Laura and these other paintings might all have a “sacred” subject, and that subject is Mary Magdalen.

I don’t think I am the first to suggest Mary Magdalen as the subject of the Laura but recent catalogs do not even consider the possibility. All do point out the paradoxical iconographic symbols: the appearance of a Venetian courtesan combined with symbols of chastity and conjugal love such as the laurel leaves and headscarf.

Mary Magdalen is the only person who fits such a description. After the Madonna she was the most famous female saint of the Middle Ages. During the Renaissance she was regarded as a prostitute who after her encounter with Jesus became a true and virtuous bride of Christ.

However, she is often portrayed after her conversion with breasts bared as a sign that she has thrown away her worldly finery and chosen the life of a desert contemplative. Correggio's later version of the saint bears a striking similarity to Giorgione's Laura. Her breasts are bared but the rest of her is covered with a sumptuous blue robe. She is easily recognized by her jar of precious oil, a stock symbol that Giorgione characteristically omitted.

In 2001 Paul Joannides discussed another painting of a young woman that he claimed bore a similarity to the Laura. He noted that it had often been attributed to Giorgione but insisted that "the closest comparisons are with Titian's work and there can be no serious doubt that it is his…."[ii]  He continued:

The Bust of a Young Woman is often thought to be a portrait of a courtesan, …There is an obvious link of mood and gesture with Giorgione’s Laura,… it is probably a fragment of a narrative composition…. But the action is ambiguous: is she opening her dress to reveal her breast, like Laura, or closing it in modesty? Given the high finish and luxurious color, this fragment is more likely to have formed part of a painting for a private house than a public place… Perhaps more likely is that she is a Magdalene in a Mary and Martha, the subject represented in Milan in the work of Bernardino Luini and his circle and one that would certainly have appealed to Titian, allowing him to contrast female types. But without further evidence no suggestion can be more than speculative.

Joannides failed to mention that the multi-colored striped shawl that covers the shoulder of the woman in the “Bust of a Young Woman” is similar to the one that Titian used years later in one of his many obvious depictions of Mary Magdalen. 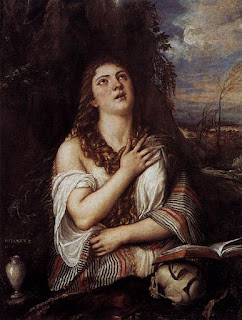 Titian became the most prolific and famous painter of Mary Magdalens, and his many versions of a beautiful, semi-nude, weeping penitent Magdalen spread all over Europe. He did not depict the gaunt Magdalen of Donatello, emaciated after years of fasting in the desert, but a still beautiful woman who has only recently thrown off her courtesan's finery, and appears covered only by her gorgeous red hair.

It is also possible that before he settled on these full figured, bare breasted Magdalens, the young Titian also painted a more discrete but equally beautiful Mary Magdalen in the mysterious painting that is now called Flora. This famous painting that hangs in the Uffizi gallery is dated to around 1517, about a decade after the Laura. It also features a beautiful young woman in an obvious state of undress who looks pensively off to the right toward the source of the light that illuminates her face and torso. 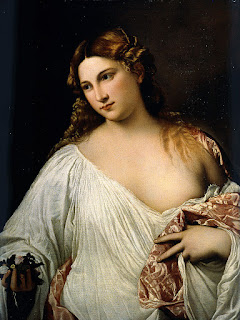 No one has ever been able to make more than a guess about the subject of the Flora. It was only in the mid-seventeenth century that a commentator attached the name of the Roman goddess of flowers to the beautiful woman in the painting. Although the name has stuck, modern scholars have brought forth objections and offered their own hesitant interpretations.

Hope looked in another direction for the meaning of the Flora.

But there was also a distinctive and more pervasive local tradition of pictures in portrait format of anonymous pretty girls, either clothed or partially nude, which were no more than elaborate pin-ups…. The identity of the girl as Flora is established both by the flowers in her hand and by her costume, which is of the type worn by nymphs in contemporary stage productions…

In a 2003 catalog of an exhibition at London’s National Gallery, David Jaffe saw the connection between Flora and Laura.

Flora is perhaps the supreme example of a genre developed in early sixteenth-century Venice showing ‘belle donne’, beautiful women, for the sake simply of their beauty. They were neither portraits—as such they would have seemed improper—nor did they usually have allegorical significance or mythological references…. Titian did not invent the type, but developed the tradition represented by works such as Giorgione’s ‘Laura’….The painting is a magnificent evocation of sensuality. ... The image may be read as a generalized ‘Venus’ type. The flowers, perhaps roses, suggest identification with Flora. [iv]

In the catalog of the 2006 Bellini, Giorgione, Titian exhibition jointly sponsored by Washington’s National Gallery and Vienna’s Kunsthistorisches Museum, Sylvia Ferino Pagden considered the Flora “the finest and most successful of all sensuous half-length female figures in sixteenth-century Venetian painting….” She noted its “Venus-like sensuousness” but pointed out the ambiguity of the subject.

If it was Titian’s intention here to depict Flora, was he thinking of Ovid’s goddesses or Boccaccio’s courtesan? Or is his portrait an artistic blending of the two?... yet his Flora has more the demeanor of a goddess….her lack of attention to the viewer makes him aware of his own insignificance….Titian’s re-creation of the classical goddess, however, lacks any reference to antiquity, even in the drapery….Flora’s chemise—usually seen merely peeking out from under a gown at the neck and sleeves but here serving as her main article of clothing overlaid by a cloth of brocade or damask—does not correspond to that of any classical figure and certainly not a Venetian bride... [v]

It should be noted that Titian’s Flora bears little resemblance to the goddess of flowers. There are no flowers tumbling from her hair and her dress was depicted by Ovid as adorned with many colors. Ferino-Pagden did identify the flowers in the hands of Flora as rose, jasmine, and violet and claimed that they provide “a key to interpreting her.” However, she provided no further explanation.

In her study, “Nature and Its Symbols,” Lucia Impelluso noted that “the jasmine has often been considered a flower of Heaven or a symbol of divine love.” While usually associated with the innocence and purity of the Virgin Mary, it can often be seen “woven into garlands adorning the heads of angels and saints.” Moreover, “if associated with roses, it can connote faith.” [vi] The wild rose is traditionally associated with Mary Magdalen. As far as the violet is concerned, Impelluso noted:

I realize that the jasmine, rose, and violet that “Flora” holds in her hand could refer to someone else, but one should certainly at least suspect Mary Magdalen.

Giorgione’s Laura, Titian’s early “courtesan,” and the Flora could all be considered versions of Mary Magdalen. One significant objection, however, is the absence in each instance of the jar of ointment that is always associated with the Magdalen. Later, Titian displayed it prominently in his more obvious Magdalens.
Perhaps in this brief moment in time Venetian artists had come to believe that they could depict the essence of the Magdalen without resort to obvious iconographical symbols. Earlier, Giovanni Bellini had painted a Madonna and Child surrounded by two female saints. One is obviously Mary Magdalen but she is only recognized by her flowing red hair. 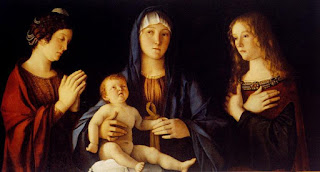 Appropriately, Flora was the poster girl for the magnificent 2013 Tiziano exhibition at Rome’s Scuderie del Quirinale. Her image was on the cover of the little pamphlet given to all visitors and posters of her were plastered all over Rome. Perhaps she and Laura and the other “belle donne” of the Venetian renaissance can be called pin ups but it is certainly conceivable that they are also Mary Magdalen.

[i] Giorgione, Myth and Enigma, ed. Sylvia Ferino-Pagden and Giovanna Nepi-Scire, Vienna, 2004, pp. 197-8. Only the first catalog quote is cited.