Paris Bordone's depiction of the Mystic Marriage of St. Catherine featured a young and virile St. Joseph  in the center. Bordone's depiction confirmed my argument that the young man in Giorgione's Tempest was also St. Joseph. In looking at Bordone's painting at the remarkable Bellini, Giorgione, Titian exhibition at Washington's National Gallery in 2006, and again in Vienna in 2007, I also discovered the reasons for the prominence of Joseph's muscular bared leg, as well as a stunning visual trick used by Bordone to expose Catherine's thigh. Below I reproduce an essay on the painting that first appeared on this site ten years ago.

The highlight of the 2006 art world must surely have been the magnificent exhibition of Venetian Renaissance painting jointly sponsored by the National Gallery of Art in Washington, and the Kunsthistorische Museum in Vienna. The exhibition, "Bellini, Giorgione, Titian and The Renaissance of Venetian Painting," also produced a beautiful catalog. Although the works of the three great masters named in the title were the focus of the exhibition, paintings by a few lesser known artists like Lorenzo Lotto and Paris Bordone were also included.

Indeed, one of Bordone's paintings, "The Mystic Marriage of St. Catherine," was a real eye stopping crowd pleaser in both locations. Painted around 1524, this extremely colorful and dramatic painting which measures about 58 by 102 inches tells the story of the legendary marriage of Saint Catherine of Alexandria to the Christ child.

According to the medieval legend which Crusaders brought back from the East, Catherine was a Queen of Alexandria around the middle of the fourth century. In the story Catherine, even as a young girl, was enamored of philosophy. By her teens she was a student of Plato and Socrates and surpassed all the philosophers of Egypt in knowledge and wisdom. At the death of her father she became Queen of Alexandria but resisted all efforts by her nobles to impel her to marry. Eventually she converted to Christianity in order to marry Christ for she regarded Him as the only one greater than her in status, knowledge and wealth. Subsequently, when Catherine rebuffed the overtures of the Roman emperor in Egypt to have her for his own, he had her put to death. Initial attempts to break her on a wheel failed and she was finally beheaded. The wheel would become the symbol by which she can easily be identified in Medieval and Renaissance art.

Next to Mary Magdalen, Catherine became the most popular female saint in the Middle Ages. She was "venerated by men as the divine patroness of learning," and by women as "the type of female intellect and eloquence, as well as of courageous piety and chastity." Her "mystic marriage" became a favorite subject for painters especially in convents where the nuns could look to her "mystic marriage" to Christ as a prototype of their own. This was especially true among the Dominicans whose favorite daughter, Catherine of Siena, was often paired in paintings with her namesake from Alexandria.

The most common way to depict the "mystic marriage" was to tie it in with the biblical account of the Flight into Egypt. Even though Catherine was supposed to have lived about 350 years after the birth of Christ, artists were not so much interested in historical accuracy as they were in an allegorical rendition of a soul's spiritual union with Christ. So Catherine is usually depicted meeting the Holy Family as they are about to return to Judea from Egypt. We know that it is the return from Egypt because we see the young John the Baptist in the painting. According to another legend the Holy Family met the future Baptist, who had fortunately escaped the massacre of the Innocents, on their return from Egypt.

Paris Bordone's depiction of "The Mystic Marriage of St. Catherine" is one of the most dramatic and unusual representations of this episode. Like other Venetian painters of the early sixteenth century, Bordone has chosen to move the Madonna and Child out of the center of the painting. They are at the left side with the cloth representing their throne hanging from a tree. The Madonna looks down and away from her Child at the Baptist who is depicted as a young boy clothed in his desert garb and leading a lamb. John looks at the infant Jesus as if to say "behold the Lamb of God."

More than anything else it is the portrayal of St. Joseph which is most dramatic and unusual in Bordone's painting. In a striking departure from traditional representations Joseph is portrayed as a virile young man. Moreover, he has been taken out of the background where we usually find him and placed right in the center of the painting. His powerful and uncovered foreleg is prominently displayed. As the beautiful Catherine approaches from the right, Joseph places his hand on her wrist and directs her outstretched finger to the wedding ring held out by the infant Christ.

As devotion to St. Joseph grew throughout the Quattrocento, he began to figure more prominently in representations of the Holy Family. His role as spouse, father, worker, and protector had a special appeal in the Renaissance. Nevertheless, in this painting there is something else going on that explains the central role of Joseph. In this painting Joseph is acting as a "proxy" for the marriage between Catherine and the infant Christ.

In marriages where the parties, usually royalty, were separated by distance, it was common to celebrate a marriage by proxy. Such a marriage was considered to be a real marriage, and not just a contract for some future event. In theory and practice both parties did not have to be present for a legal marriage to occur. It only required the consent of both even if one of the parties gave a written consent. It was not necessary for a clergyman to be present.

One particular way of "consummating" this marriage by proxy is alluded to in this painting. I don't know where or how it began, or how extensive it was, or when it ceased to be used but the practice was common in the sixteenth century. An ambassador or proxy would be sent to the court of the bride to perform the ritual. In the presence of notable witnesses, the young woman would be conducted to the nuptial bed wearing a loose fitting gown. The "proxy" would then remove his shoe and stocking from one leg before entering the bed. Apparently, he would then expose a part of her leg and touch it with his own to consummate the marriage.

Here is Hester Chapman's description of the "proxy" marriage of Mary Tudor, the beautiful 18 year old younger sister of Henry VIII to the elderly Louis XII of France in August 1514 at Greenwich. The Duc de Longueville acted as proxy.

After High Mass and a Latin sermon preached by the Archbishop of Canterbury, the marriage vows were exchanged and the ring was placed on the Princess's finger. The ceremonies did not end there. To make assurance doubly sure, Henry had arranged that symbolic intimacy should take place. Surrounded by his court and the foreign ambassadors...he talked informally with de Longueville, while Mary left to change her dress for a robe giving the effect of a nightgown. When she reappeared, Katherine and her ladies led her to a state bed, on which she lay down. De Longueville then advanced, pausing at the foot of the dais to take off one of his scarlet boots, thus revealing a bare leg. Lying beside the Princess, he touched one of her legs with his naked foot. His gentlemen then replaced his boot, and he came down into the hall, while Mary retired again to change into a ball-dress.

De Longueville acted as Louis XII. It was as if the King of France had really been there. From that moment Mary Tudor could call herself Queen of France.

Why did Paris Bordone choose to depict the "mystic marriage" of St. Catherine as a marriage by proxy? Countless paintings of the same subject during this era take a much more traditional approach. Catherine is usually shown in her regal robes kneeling before the Holy Family. Usually she is gazing lovingly at the infant Christ. Sometimes she will touch Him, and sometimes she will even cradle Him in her arms. Often, He is about to place a ring on her finger.

In fact, in another version of the "mystic marriage" Bordone also used the "proxy" theme. This painting hangs in the State Hermitage Museum in St. Petersburg and appears to have been painted about the same time. In this version we again see the young, virile Joseph with his powerful foreleg exposed. However, now Joseph is placed on the right side and remarkably holds the infant Christ in his hands! Madonna, who has released her Child from her grasp, leans backward to hear Catherine's proposal. In this picture there is no John the Baptist. 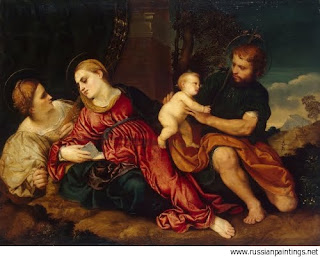 Scholars date both paintings between 1520 and 1524. We are still in the High Renaissance but we are also in the beginnings of the Reformation. Perhaps after a century of growing devotion, Joseph had come to be seen as not only the protector of Madonna and Child but also as the protector of the Church. In these paintings does he represent the Church, the intermediary between God and man? In a "proxy marriage" the proxy was the representative of the King, and union with the proxy was union with the King. After Martin Luther's assault on the role of the Church as mediator, was Bordone or his theological advisor reaffirming the role of the Church?

In both paintings the Infant Jesus is moving away from the Madonna. Perhaps Bordone is recalling Christ's words about marriage. "For this reason a man will leave father and mother and cleave to his wife." But the painting could also refer to another biblical passage. "Did you not know that I must be about my Father's business?" In Franciscan spirituality the nude infant Jesus is equated with the naked Christ on the Cross and with the Eucharist on the Altar. Marriage is the sacrament of love, the complete giving of one's life for another. On the return to Judea, Christ would begin his journey to Calvary. The legendary Catherine would stay in Egypt and give her life for Him.

Finally, a word about Catherine. Her gown is pink, almost matching the color of her skin. Has Bordone exposed a part of her right thigh? It is almost impossible to notice in a reproduction. Even standing in front of the painting it is not immediately obvious. But looking closely her gown appears to have parted to reveal a dark band across her exposed thigh. Bordone has played a masterful eye-catching trick here leaving it to the beholder to make up his or her own mind. This painting certainly deserves modern scientific treatment to discover if there is anything in the underpainting that would indicate that Catherine bared her leg in the same manner as Mary Tudor.
###
Posted by Dr. F at 7:31 AM