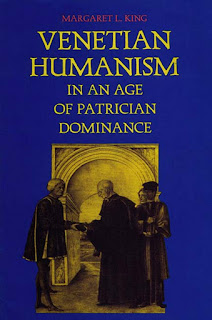 I do not know how Margaret L. King’s, Venetian Humanism in an Age of Patrician Dominance was received when it first appeared in 1986, but it was a real eye opener for me 25 years later. I originally looked into it for the profiles in the last section of her study of all the ninety-two humanists that she found in Venice in the fifteenth century.*

Ninety-two was not a capricious or arbitrary number. Although a literary scholar, King’s methodology resembled that of a trained sociologist.  She studied the three generations of fifteenth century Venetian humanists and developed specific criteria for inclusion in the group. Speaking of her study, she wrote,

It has not argued that Venetian humanism mimicked humanism elsewhere, but that a particular society will generate a characteristic form of any intellectual movement. It…has spoken of ninety-two concrete personalities named by plausible guidelines as members of the humanist circle. It has not simply asserted that social origin affected the behavior and production of intellectuals engaged in humanism, but has pointed to documented cases of such influence. It has not put faith in conclusions drawn from the reading of a few works but has tested them in many drawn from the whole of humanist production. (245)

Not only are the patricians the largest social group among the society of Venetian humanists. They also come overwhelmingly from the most privileged sector of that class. (277)

It is hard not to stress the importance of this finding. Although titles of nobility had never been permitted in the Venetian republic, the Venetian patriciate was the most exclusive class of nobility in all of Europe. Except for one exception in the fourteenth century no new members or families were ever admitted to this class. Unlike England where the King could grant titles, the Venetian Doge or government had no such power.

As a result of this patrician involvement Venetian humanism developed along quite different lines than elsewhere. King’s first chapter is titled “Unanimitas,” and it develops three distinct and characteristic traits of Venetian humanism. In the first place, practically every fifteenth century humanist was involved either directly or indirectly in service to the State. Many of the patricians, of course, held some of the highest offices in the Republic, and even the non-patricians either served the patricians or were employed by the government as secretaries. Not only did they work for the state but their writings also reflect a concern to glorify and perpetuate the Serenissima.

Secondly, in the fifteenth century there was no philosophical disagreement. The Aristotelianism propounded in the nearby University of Padua reigned supreme. Even though Venice had conquered Padua, intellectually Padua had conquered Venice.

Aristotelian political, metaphysical thought provided, in brief, legitimation for Venice’s highly stratified, rigid, and authoritarian society. The humanists, who in large measure profited from that social order, happily wedded their humanism to that philosophical vision. (184)

After a thorough examination of seven major humanist works, as well as a host of minor ones, King found no hint of Neo-Platonism throughout the fifteenth century.

Thirdly, she did not find any hint of secularism or deviation from religious orthodoxy. What she writes about the second generation applied to the others.

At the same time, they defended orthodoxy, religious and philosophical, respected the authority of the church, feared and respected outsiders, feared and condemned immorality. This conservative component of Venetian humanism coexisted with its other main purpose: the celebration of Venice. (230)

King cites many individual examples of Venetian piety and orthodoxy and concludes with this summary.

Concerned, even anxious, about the welfare of their souls and of their city, these humanists selected from the writings of antiquity not those values which displaced, but those which complimented a traditional piety. (37)

Not only did these humanists compose and copy many religious works, but sometimes their devotion could see strange meanings in some of the ancient pagan texts they studied. In his Concordance of Poetry, Philosophy and Theology Giovanni Caldiera found moral or spiritual analogues in many ancient myths.

Where Paris, asked to judge among three goddesses, awards the golden apple to Venus, Caldiera sees the apostle Paul presented with the three theological virtues, choosing love…Jove’s seduction of Leda, wife of King Tyndar, is seen as Christ’s wresting of the holy church of God from its union with the Old Law. (114)

To summarize, there was no conflict between faith and reason in fifteenth century Venetian patrician humanist circles. Christianity and Aristotelian philosophy went hand in hand in support of the Venetian state and its hierarchical class system. King notes one historian’s very apt comparison of Florence and Venice. Florence is Athens and Venice is Sparta.

Initially, I wondered why King confined her study to the three generations of fifteenth century scholars. Didn’t humanism flourish and grow right into the next century? It could be that she had more than enough material here, and that she planned future studies. However, it soon became clear that she believed that a striking development took place in the fourth generation of humanists, those born between 1460 and 1490. At the very outset of what we call the High Renaissance, Venetian humanism developed offshoots that would challenge and weaken the old unanimity.

King’s statistical analysis showed a swelling of the ranks at the dawn of the sixteenth century caused in large part by the remarkable growth of the printing industry in Venice.

Humanists and related members of Venice’s intellectual circles born in the generation immediately following the third of our core group…are multitudinous; for the ranks of humanist circles are swelled by amateurs, patrons, collectors, printers’ assistants editors, translators, teachers of all kinds in the last decade of the century. (270)

Much of this activity centered on the press opened by Aldo Manutius after his arrival in Venice in 1491. It quickly became a center for humanist activity.

Around him and his assistants flocked the humanists of Venice, pedagogues and secretaries, university professors and physicians, young or leisured noblemen. (238)

The synthesis of humanism and the values of the Venetian aristocracy was weakened by this development as scholars focused more on their texts and translations. For many of them involvement in the affairs of the Republic was replaced by a sterile philological pedantry.

Nor was that movement fully successful; it lacked not energy but a moral dimension. There seemed to be embedded in the intellectual movement of those dissectors and correctors of words no broad conception of the world, of society, of the place and depths and stature of the human being. Though they produced useful work…their zeal was sterile. Their words, bloodless, do not live. (236)

Other humanists began to drop out in order to find personal religious and philosophical fulfillment. Venice was not immune to the great religious reform movement that was sweeping over Europe in the fifteenth century decades before the Protestant Reformation.

King tells the tragic story of Ermolao Barbaro, a humanist from one of the most prominent patrician families, who was ostracized for accepting a bishopric from the Pope that the Signoria wanted for its own candidate. Barbaro was not interested in being a prince of the Church but defied his city because he believed that as a Bishop he would be free to lead a quiet life of study and contemplation.

Another scholar wrote a treatise advocating celibacy, not for religious reasons but as a means of detaching oneself from the cares of the world. A wife and children meant a family, and a family inevitably in Venice involved participation in the political and economic life of the City. How could someone be free to study and learn with such concerns?

Some dropped out for purely religious concerns. The most striking example is that of Tommaso Giustiniani who, like the rich young man in the Bible, gave up all his possessions, including his art collection, to live as a hermit in a Camoldolensian monastery.

In her concluding chapter, King describes the decline of Venetian humanism and the coincident rise of its artistic renaissance.

Thus patrician humanism survived into the sixteenth century, marked by its peculiarly Venetian balance of the universal vision and local civic responsibility, and by its expression of the themes of unanimitas fundamental to the city’s myth. Yet it constituted but one tendency of sixteenth-century humanism, which included, as well, the technical and routinized culture of the philologists and encyclopedists, the mediocre classicism of teachers and secretaries, the book talk and trading generated by the presses. And it constituted but one strand of Venice’s intellectual culture…and neither the primary nor most characteristic one. For the foci of Venice’s culture in the sixteenth century, and perhaps the true glories of her Renaissance, were not in humanism at all, but in vernacular literature and the arts. (242)

In King’s analysis Venetian patricians who came to maturity around 1500 did not share the outlook of their fathers.

They shed at the same time other restraints operative in Quattrocentro humanism. The sensuality prohibited by humanist arbiters of taste exploded into view. A diversity of themes and sentiments appeared that had not been possible within the contours of humanist culture neatly dictated by the assumptions of scholastic philosophy and Christian orthodoxy….In a parallel development, the visual arts at about this time abandoned the conservative canons of form followed strictly during most of the fifteenth century and embraced the language of color. (243)

One of the prominent humanists profiled by King was Marco Aurelio, the father of Niccolo Aurelio, who would succeed his father in the Venetian secretariat and go on to become Grand Chancellor, the highest rank that a non-patrician could hold. Niccolo’s coat of arms can be seen on Titian’s famous “Sacred and Profane Love,” a striking example of the Venetian language of color. ###

*All quotes are from Margaret L. King, "Venetian Humanism in an Age of Patrician Dominance," Princeton, 1986. Page numbers in parentheses.